At the top of the website I have a button linking to an article I wrote for Cracked.com back in May in which I explored about a half-dozen reasons why making major changes to healthcare policy in the U.S. is such a royal pain in the ass. I'm a Single Payer advocate at heart, so it was mostly written from that perspective, but really, most of the points I made would apply to any major policy change.

One thing you may notice in reading the piece is that at no point do I address the cost/payment side of moving the entire U.S. over to a universal, federally-funded Single Payer system; I stick mostly to the logistical side of things (What to do with 2-3 million industry workers? What about the Hyde Amendment? Etc, etc). These are all reasons why I'm convinced that achieving such a system would have to be done in stages. That doesn't mean tiny stages, mind you; "incremental" simply means "more than one step", so it could be, say, 4-5 stages phased in over 20 years or whatever...just not all in one shot.

However, today the Kaiser Family Foundation has issued a new national survey which demonstrates one of the biggest problems the "SP NOW!!" crowd will have to tackle in order to have any chance at pushing through a national Single Payer system:

The June Kaiser Health Tracking poll finds that a slim majority of the public (53 percent) now favors a single-payer health plan in which all Americans would get their insurance from a single government plan, while just over four in ten (43 percent) are opposed. This is somewhat higher than the level of support found in a variety of Kaiser polls with slight variations in question wording dating back to 1998. From 1998 through 2004, roughly four in ten supported a national health plan, while about half were opposed. In polling from 2008-2009, the period leading up to passage of the ACA, the public was more evenly divided, with about half in favor of a single-payer plan and half opposed.

Not surprisingly, there are partisan divisions in how the public feels about single-payer health care, with a majority of Democrats (64 percent) and just over half independents (55 percent) in favor and a majority of Republicans (67 percent) opposed. However, the recent increase in support for single-payer has largely been driven by an increase among independents. Among this group, on average in 2008-2009, 42 percent said they would favor a single-payer plan, a share that has increased to a majority (55 percent) in the most recent tracking poll.

OK, so 53% of the public now supports SP, including 64% of Democrats and 55% of Independents...and even 28% of Republicans support it. Fantastic...the time is now and all that, right?

SUPPORT FOR SINGLE-PAYER IS MALLEABLE WHEN GIVEN OPPOSING ARGUMENTS

While a slim majority favors the idea of a national health plan at the outset, a prolonged national debate over making such a dramatic change to the U.S. health care system would likely result in the public being exposed to multiple messages for and against such a plan. The poll finds the public’s attitudes on single-payer are quite malleable, and some people could be convinced to change their position after hearing typical pro and con arguments that might come up in a national debate. For example, when those who initially say they favor a single-payer or Medicare-for-all plan are asked how they would feel if they heard that such a plan would give the government too much control over health care, about four in ten (21 percent of the public overall) say they would change their mind and would now oppose the plan, pushing total opposition up to 62 percent. Similarly, when this group is told such a plan would require many Americans to pay more in taxes or that it would eliminate or replace the Affordable Care Act, total opposition increases to 60 percent and 53 percent, respectively.

I'm not gonna get into the "too much control" question, and the survey goes on to note that many of those opposed to SP can also be won over by compelling arguments in favor of it, which is great to hear.

HOWEVER, according to the Kaiser survey, a whopping 19% of the public SWITCHES from supporting to opposing SP as soon as they're informed that they might have to, you know, pay more in taxes to cover the system. 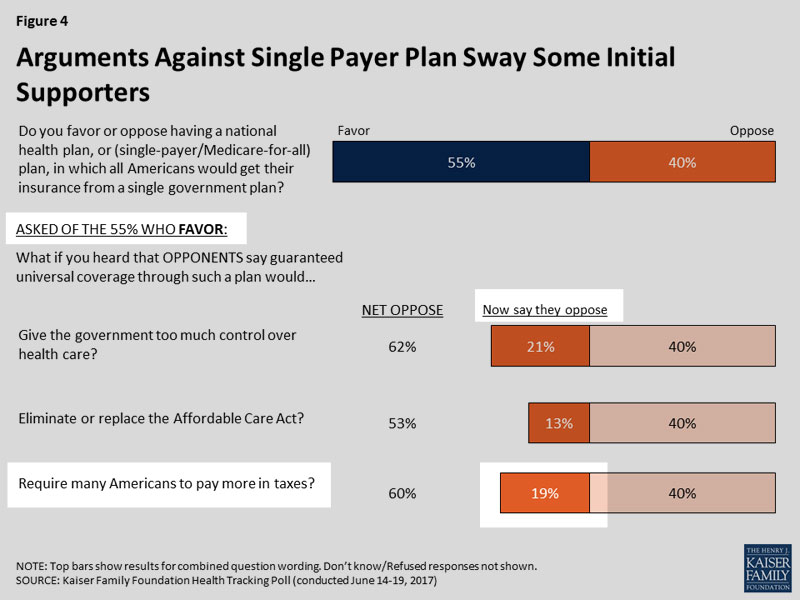 Now, when I read this, my initial reaction via Twitter was an outburst: "How the heck did those 19% THINK it was gonna be paid for in the first place?"

The thing is, on paper, saying "your taxes would go up $3,000 (or whatever) but your'd save $5,000 in expenses" seems to be a no-brainer...but in reality, most people don't think that way. They hear "your taxes would go up" and the rest sounds like Charlie Brown's teacher. Even if they do hear "you'd save a net of $2,000" (or whatever), psychologically, you're asking for a leap of faith: The tax increase would be definite...whereas the savings would be theoretical right up until the law was actually implemented for a year or two.

Now personally, I'd still support achieving SP (eventually) even if it ended up costing me precisely the same overall as I'm paying now (but not any more), if only for the massive reduction in paperwork, red tape and headache-inducing phone calls in dealing with insurance companies, hospitals and doctors. However, most people would insist on some amount of cost savings before committing to such a huge overhaul.

However, just for the sake of argument, just how much would have to be raised in taxes every year to pull something like this off, and who would those taxes fall upon?

According to the National Health Expenditure report from CMS, in 2015,

Obviously those numbers have gone up over the past 2 years, and this is an oversimplification, but let's go with a flat $10,000 per person for around 320 million people, or roughly $3.2 trillion per year. Let's ignore things like population growth, medical expense increases and so on for the moment.

Of that total, around 55% is paid for via some sort of public funding (mostly Medicare and Medicaid) with the other 45% being privately paid for via insurance premiums, deductibles, co-pays and so on. Again, a gross oversimplification I realize.

Let's assume a pretty generous SP plan: Call it the equivalent of a Platinum PPO (90% AV, accepted by pretty much every doctor/hospital) covering nearly 100% of the population...and let's assume it cost exactly as much as we're spending now to cover around 90% of the population with a wide range of comprehensiveness. That means we'd have to come up with an additional $1.45 Trillion per year in tax revenue total.

Assuming that the increased efficiency via economy of scale, no duplication of effort, reduction in billing costs and other administrative overhead were to reduce total healthcare costs by, say, 20%, that'd be around $820 Billion per year which would have to be raised.

So, how do you allocate that $820 billion per year in taxes? Remember, right now the GOP is fighting tooth and nail to lower taxes by around that same amount for the ultra-rich over ten years, so you're really talking about doing the opposite, but ten times higher.

Let's assume you had a solid progressive Democratic majority which was confident enough to not only say "tough beans" to the wealthiest 1% of the population on the current taxes but also doubled their share. That would cover about 10% of the excess. Dump another 10% of it on various corporate/investment taxes and that'd leave around $650 billion for everyone else. If you assume the lowest 25% income population (who are mostly on Medicaid right now anyway) didn't end up seeing their taxes go up at all, you're talking about dividing $650B up among perhaps 240 million people, give or take. That would average out to somewhere around $2,700 per person.

And that's where the sales pitch comes in: How easy or difficult would it be to sell middle/upper income people on their income taxes going up an average of $2,700 per person in return for not having to pay more than a nominal amount out of pocket for very comprehensive coverage?

Of course, ideally such a SP system would slash total costs by more than 20%; if it cut costs by 30% we'd have to come up with $490 billion extra, or around $2,000 extra per middle/upper income person per year, and so on.

That last bar graph is the key here. I presume around 36% of the public already understands that they'd have to pony up a few thousand in taxes, and supports doing so in return for a SP system. It's the other 19% who have to be sold...and really, more than that, since the attacks on such a plan would be massive and furious, making the "Harry & Louise" ads of the early 90's and the Koch Bros' anti-Obamacare ads seem like a pleasant memory by comparison.

My guess is that a poll like this would have to show at least 60% solidly supporting Single Payer KNOWING that their taxes would increase in order for it to have a solid chance at success...and that's gonna take a LOT more education, outreach and so forth before it gets to that point.

Of course, that's in addition to the other issues I raised in the Cracked article.

Again: if the Democratic Party really wants to go for all the marbles instead of massively beefing up/improving the ACA in the short term (say, the next 4-8 years or so), fine...I just want everyone (especially the Bernie die-hards) to be absolutely clear about just what a tough nut it'll be to crack first.