This year, to the best of my estimates, Tennessee's total individual market consists of roughly 300,000 people, around 2/3 of whom are enrolled via the federal ACA exchange. Humana is dropping out of the state next year, meaning roughly 79,000 enrollees will have to shop around.

To my knowledge, there are actually 6 individual market carriers in Tennessee this year: Aetna, TRH (Tennessee Rural Health), Blue Cross Blue Shield, Cigna, Humana and "Freedom Life" (which, again, is basically a phantom carrier with no enrollees). Aetna and Humana are out, so that leaves TRH, BCBSTN and Cigna. TRH doesn't appear to have submitted an official 2018 rate filing as of yet, but they only had 3,500 enrollees this time last year anyway, so likely won't have much impact on the overall weighted average rate hikes.

That leaves Blue Cross, Cigna...and new entrant Oscar Health (founded by, of all people, Jared Kushner's brother, for whatever that's worth). Since Oscar is the new kid in town, they technically can't list a "rate hike" since there's no existing rates to compare against. That means it's down to BCBS and Cigna.

Cigna's filing hike request is a pretty ugly 42.1% overall...but they clearly state that a full 14.1 percentage points of this...or a solid third...is due specifically to Donald Trump and the Congressional GOP's threats to cut off the legally-owed Cost Sharing Reduction reimbursements due to the carriers. They also make a reference to Trump/Tom Price's threats not to enforce the individual mandate (by way of the increased morbidity profile expected for next year), but don't specifically break that part out. Without the CSR sabotage threat, however, they clearly state that they'd "only" be requesting a 28% increase (still ugly, but not as bad as 42%).

Blue Cross Blue Shield, however, is taking the "Trump/GOP Sabotage" factor up to the next level, following BCBS of North Carolina's lead. Take a look at this blog post/press release which came out yesterday:

While the majority of Tennesseans get health insurance through their jobs, or programs like TennCare and Medicare, we cover around 78,000 residents who purchase coverage on their own. If you’re one of them, you may have questions about the future of your coverage.

One of the most common is, “How much will my plan cost next year?”

Today, we submitted our proposed 2018 rates to the Tennessee Department of Commerce and Insurance for their review. We know what we charge has a real impact on our members’ lives, and we want to explain why rates are rising again next year.

Finding balance between the costs of care and coverage

When we started offering Affordable Care Act (ACA) plans in 2014, we had some of the lowest-cost plans in the country because we assumed a large number of young, healthy people would sign up for coverage. Unfortunately, they didn’t – and the medical services required by our new members were more expensive than we’d anticipated.

The risk pool didn’t get better. In fact, we lost $400 million over the course of three years because of the gap between our rates and the costs for medical services our members needed and our costs to operate the program.

We have achieved a better balance with our 2017 rates. And for the first time since the Marketplace launched, we expect to earn a net margin (profit) on individual plans – which is necessary for the long term, even as a not-for-profit company.

How federal uncertainties are affecting 2018 rates

Medical costs continue to rise, and we’re facing additional taxes for this line of business, but our experience so far in 2017 means we would have only needed a small average rate increase.

However, we have to account for two significant uncertainties at the federal level: 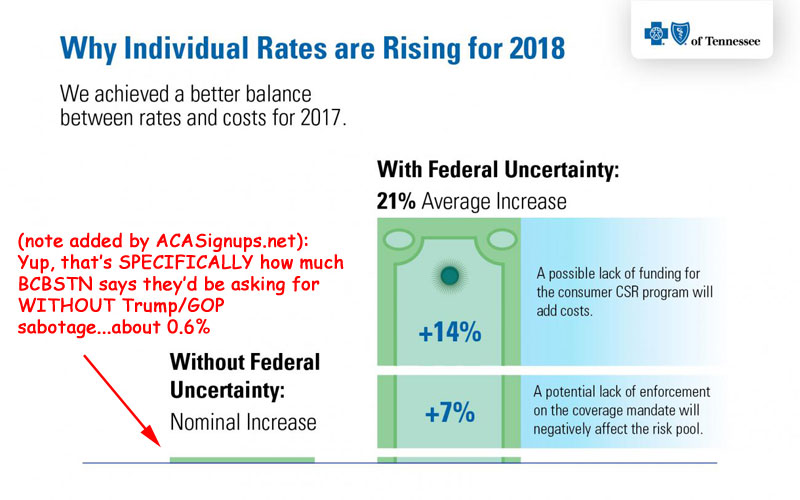 Yes, according to Blue Cross Blue Shield of Tennessee themselves, the one-two GOP sabotage threats to CSR funding and individual mandate enforcement are directly responsible for a jaw-dropping 97% of their requested premium increases for 2018 on the individual market.

In fact, considering the 2-3% Health Insurer Tax, it seems to me that they're saying that they're doing so well in 2017 that they're even willing to eat part of that cost (since otherwise, the "no sabotage" hike would be at least 3% or so). Amazing.

The post even goes into a nice, detailed explananation of how CSRs and the individual mandate work, and even mention the ACA's 80/20 MLR rule. Very impressive.

In any event, with only 2 carriers to plug into the spreadsheet, each with roughly half the renewing-enrollee market share, here's what it looks like at the moment:

That's a weighted average rate hike request of 31.1% including the Trump/GOP Sabotage factor, versus 13.5% without most of it (remember, Cigna's 28% figure still assumes uncertainty over mandate enforcement). 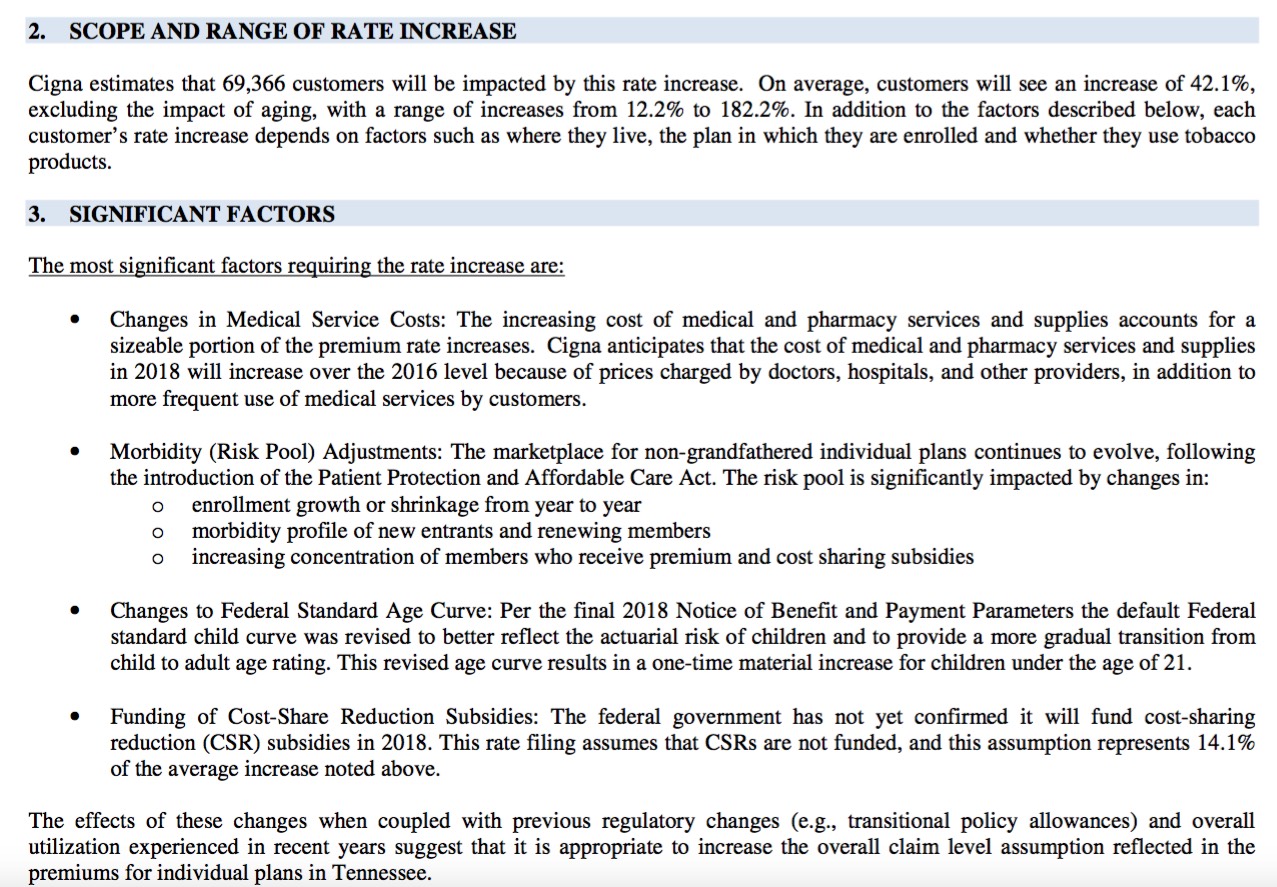