While poking around in the SERFF rate filing database for different states, I occasionally find filings which DON'T apply to ACA-compliant policies or enrollees but which are of interest to healthcare nerds such as myself. I've decided to bundle these into a single post as they pop up, so check this entry once in awhile.

IOWA: Big Kahuna carrier Wellmark submitted a filing for non-ACA compliant small group policies (either grandfathered or transitional) which have effective/renewal dates of July, August or September 2017. The requested rate increase is 7.0% on average, which is pretty typical for small group plans, and it appears that Wellmark had 51,003 people enrolled in such policies as of 12/31/16. Nothing odd there.

This filing pertains to all Wellmark Blue Cross and Blue Shield of Iowa’s (“Wellmark”) new and in-force pre-ACA compliant (grandfathered and transitional non-grandfathered) small employer business with effective or renewal dates of 7/1, 8/1, and 9/1; which encompasses all classes as well as all products (Form Number “Wellmark IA Grp”). It is possible to transfer a small employer grandfathered plan from one carrier to another under limited circumstances, which is what Wellmark is calling “new pre-ACA compliant small employer business”. The recommended base rate increase is a 12-month rate increase. However, as was outlined in a letter from Wellmark to the Iowa Insurance Division on March 23, 2016, Wellmark is allowing transitional small employers that changed their plan year to January 1 to keep their 2016 renewal premiums until 12/31/2017. These premiums will not be adjusted for changes in rating characteristics, such as risk, age, or family composition.

I have no idea which "limited circumstances" Wellmark is referring to here or how many people this applies to, but on top of the grandfathered and transitional plan categories, this may help explain why Iowa is having so much trouble getting their individual market risk pool to stabilize. If the same 50K people, most of whom are presumably fairly low risk, are allowed to not only stick with their existing non-ACA policy but to even switch to a different non-ACA policy (which I thought was verboten), that explains a lot. Iowa's entire non-elderly population is around 2.63 million people, so those 50,000 people are a huge chunk of the eligible population.

SOUTH CAROLINA: Golden Rule has two filings for what I grandfathered and transitional policies starting in August:

The anticipated rate increase in the South Carolina individual major medical business for the Generations 12-19 and 21-25 have a proposed effective date of August 1, 2017. The requested average rate increase is 5.8% for all medical plans and medical riders, which will occur at least one year after the most recent rate increase for each certificate. It is projected that there will be 2,901 covered lives with grandfathered status impacted by the August 1, 2017 increase.

The anticipated rate increase for the South Carolina individual major medical business for the Generations 25-27 have a proposed effective date of August 1, 2017. The requested average rate increase is 17.5% for all medical plans and medical riders, which will occur at least one year after the most recent rate increase for each certificate. It is projected that there will be 4,946 covered lives with non-grandfathered status impacted by the August 1, 2017 increase.

That's 7,847 non-ACA indy policies accounted for in South Carolina. Note that between the two, rates are going up an average of 13.2% even though none of these policies have anything to do with the Affordable Care Act.

TEXAS: ANTEX has a filing for a 28% rate increase for 1,710 people in grandfathered (non-ACA compliant) policies across 9 states (the other states are connecticut, Indiana, Louisiana, Michigan, New Hampshire, Pennsylvania, Tennessee and Virginia):

Golden Rule is requesting a 13% hike for 7,822 grandfathered enrollees:

Here's an interesting one: New Era Life Insurance Co. has several filings for a nominal number of grandfathered enrollees (only a couple hundred people between the three, I believe). They're only asking for rate increases of 8.0 - 9.5%, but check out the description of the policies we're talking about: 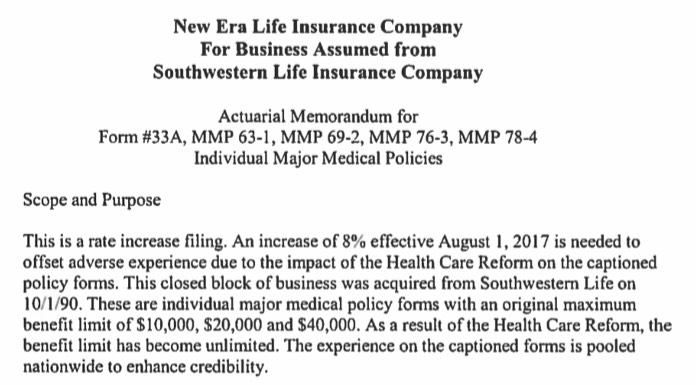 Yes, you read that correctly: "These are individual major medical policy forms with an original maximum benefit limit of $10,000, $20,000 and $40,000. As a result of the Health Care Reform, the benefit limit has become unlimited."

WYOMING: To my knowledge, Wyoming has only one carrier offering ACA-compliant policies on the exchange this year: Blue Cross Blue Shield of Wyoming. Off-exchange, there's "Freedom Life" but that's just a placeholder; they never have anyone actually enrolled in any policies that I could tell.

It doesn't look like BCBSWY has filed anything yet, but I was a bit surprised to see Golden Rule (a UnitedHealthcare subsidiary) has submitted two filings, one for what I assume are transitional policies (off-exchange only), and one for grandfathered enrollees.

The effective date for both rate increases is supposed to be July 1st. Since I believe ACA-compliant policies can't change their pricing mid-year, that suggests that the non-grandfathered policies are transitional instead.

Of course, these numbers were as of 12/31; I don't know how many of the 1,106 total have dropped these plans, passed away, etc since then.