20% of South Florida's non-elderly population is enrolled in the individual market.

Wow. If my estimates are accurate, this strikes me as being pretty significant.

I'm in the middle of my latest project, recompiling the Center for American Progress estimates of how many people have pre-existing conditions in every Congressional District nationally.

In additon to color-coding their data by the political party of each District's Representative, I'm also adding my own spin on the data: Estimates of how many people currently enrolled in the individual market suffer from "pre-existing conditions" which would likely mean them either being denied coverage altogether if the ACA's Guaranteed Issue, Essential Health Benefits and Community Rating provisions were to be stripped (Alternately, these people would charged massively higher rates to the point of likely not being able to afford the policy).

In order to do this, I first have to add up my best estimates of the total individual market size for each district (both on and off-exchange enrollment). Then I have to enter the total district population under 65, by subtracting the >65 number from the district total (courtesy of this tool from the U.S. Census Bureau...estimates as of 2015). I then divide the individual market by the total <65 population, and multiply that percentage by the total number of people with pre-existing conditions estimated by CAP.

For instance, in Colorado's 1st District (CO-01), CAP estimates 352,300 people have a pre-existing condition. CO-01 had around 25,000 ACA exchange selections as of 1/31/17. Of that, I estimate around 21,785 are currently effectuated as of today (87%). The Millman analysis suggests roughly 31% more off-exchange enrollees state-wide than exchange-based; assuming this holds for each district, that's roughly 28,600 off-exchange enrollees in CO-01, for a total individual market size of 50,367.

So far, so good. Out of the first 8 states (+DC) I've compiled, every Congressional District has stayed fairly close to that 6.4% figure (the lowest is Alaska, at 3.8% for the entire state; the  highest is CA-27, where 12.3% of the non-elderly population appears to be on the indy market.

And then I got to Florida, which looks like this: 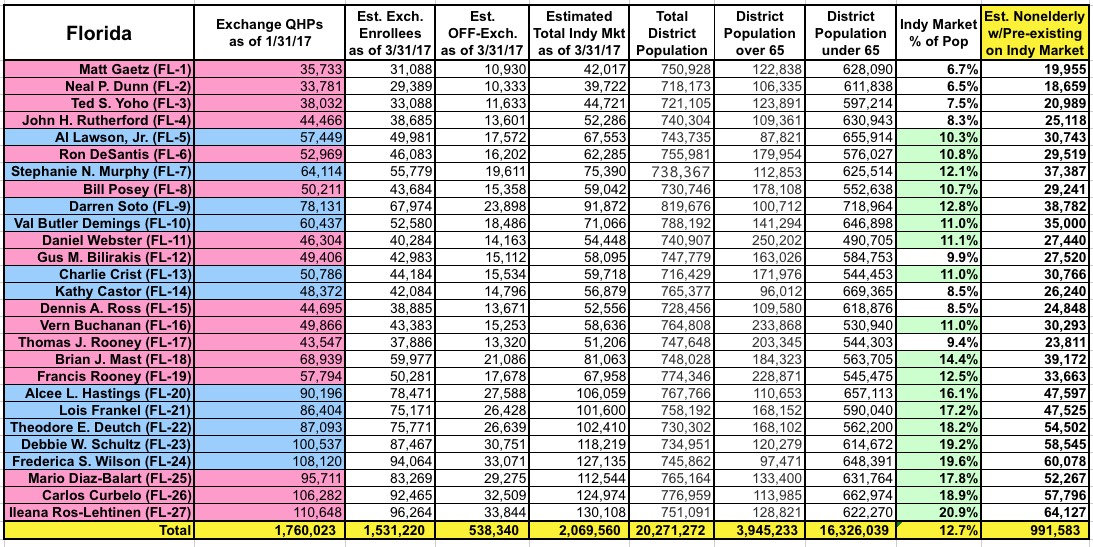 In all 19 of Florida's 27 districts break 10%. I'm assuming that some of the reason for this has to do with Florida simply having a higher percentage of seniors than most states, but that still wouldn't account for the non-elderly population insurance demographics breaking out this way. The proportion between the individual, small group and large group markets should still be roughly the same as other states, shouldn't it?

The only reason why Floridians should be twice as likely to be on the indy market as the rest of the country (and 3x as likely in South Florida) would be due to it having a very different job market than most states--a much higher percentage of people who work as independent contractors/are self-employed or work for very small companies (say, under 25 employees) which don't provide group coverage. It also occurs to me that there could be a correlation between this and the fact that Florida Blue is actually doing just fine on the individual market, both on and off the ACA exchange.

I don't know much about the Florida job market, so I'll hold off on drawing any conclusions until I've completed all 50 states; it's possible that other states will show a similar deviation from the norm, but so far Florida is really standing out to me.

UPDATE: For the record, I was able to get the following report directly from the Florida Office of Insurance Regulation, which gives the exact state-wide individual market enrollment numbers, broken out by category (on exchange, off-exchange, grandfathered & transitional). Unfortunately, this is 2 years out of date (3/31/15), but it at least shows that my estimates above are in the right ballpark:

Since March 2015, exchange enrollments have increased by about 20% (to 1.53 million), while the off-exchange enrollments are down by about 14% (from 628,347 to around 538,000), which makes sense as people drop grandfathered/transitional plans and move onto ACA-compliant plans (with most people under 400% FPL going with exchange-based policies). The overall indy market seems to have grown by about 8.5% over the past 2 years, to just under 2.1 million.

UPDATE 4/13/17: OK, I've now compiled the estimates for 22 states, and there's still only 4 districts outside of Florida where the total individual market cracks 10% of the non-elderly population, much less 15 or 20% (3 districts in California and one in Idaho). There's definitely something unusual going on with Florida's individual market size.

Whatever the socioeconomic reasons may be for this, the fact remains that if the individual market (both on and off the exchange) is destroyed by Donald Trump's sabotage and/or the GOP's "repeal/replace" dithering, Florida Republicans such as Brian Mast (FL-18), Mario Diaz-Balart (FL-25), Carlos Curbelo (FL-26) and especially Ileana Ros-Lehtinen (FL-27) could be in even deeper trouble than the rest of the GOP caucus for this reason alone.

Here's all 435 Congressional Districts, sorted from lowest to highest by what percent of their non-elderly population I estimate is currently enrolled in the individual market (both on and off-exchange combined):