UPDATE: Obamacare Repeal: How Many People Could Lose Coverage in YOUR State?

01/12/17: PLEASE NOTE: I know there's a whole bunch of updates/revisions below; this is because I'm constantly updating both the Medicaid expansion and exchange policy numbers daily, in real time as I'm able to compile the most recent enrollment numbers. In most cases the numbers are quietly increasing, although in a few cases I've revised them downward.

I operate this site by myself and I do have a day job, family, etc, so if I haven't updated your state, be assured I'll get to it as soon as possible.

If you'd like to support my work here at ACASignups.net, please feel free to do so via either PayPal or GoFundMe, thanks!!

I've also been compiling county-level breakouts for each state; I have about half of them done so far. Find yours here!

Last week, in my latest exclusive entry at healthinsurance.org, I crunched the numbers to see just how many people would likely lose their healthcare coverage if congressional Republicans, along with Republican President-elect Donald Trump, were to follow through with their explicit promise to repeal the Affordable Care Act (otherwise known as "Obamacare") early next year.

As I noted, the GOP is still incredibly vague about what exactly they'd replace the ACA with. No matter what they claim, it's only the "repeal" part which they've been clear about so far. All indications are that they plan on pushing the "repeal" part through almost immediately upon Trump taking office. Therefore, I focused specifically on what would happen if the ACA were repealed, in full, in early 2017 with immediate effect (as opposed to this weaselly 2-3 year delay business they've been bandying about which could potentially be even worse for the healthcare market as a whole in some ways).

Remember, there are four categories of people who would lose coverage:

**The Kaiser Family Foundation just released a report receiving a lot of attention which estimates how much ACA subsidy money is going to each state which would be wiped out by the law being repealed. They tally the number of exchange enrollees at 9.4 million. My estimates are somewhat lower because those at the very top of the subsidy income range only receive nominal subsidies (perhaps $10-$20/month) which would likely just be irritating as opposed to forcing them to drop coverage entirely.

My methodology and many of the data source links can be found here. The rest can be found here. I've simplified the full spreadsheet below, and have also whipped up handy InfoGraphics for all 50 states (+DC) for folks to share on social media:

IMPORTANT UPDATE x2: The Urban Institute has completed their own analysis of just how many people would lose coverage in the event the Republicans partially repeal the Affordable Care Act without a replacement...and the projections are even worse than a full repeal starting in 2018, if you can believe it.

Why? Because a partial repeal would eliminate all the coverage that a full repeal would...but would also leave in place all of the "good stuff" :

While this sounds great in theory, the reality is that keeping all of the "carrots" while removing all of the "sticks" would have the effect of sending premiums through the roof (far, far beyond the 25% unsubsidized average we saw this year)...which, in turn, would lead to the entire individual market collapsing, not just the subsidized market.

Note that the state infographics below assume a full repeal. For a partial repeal, tack on about another 30% to each total.

UPDATE: Per request, I've updated the table to include a) the Urban Institute estimates in the event of a partial repeal and b) the percent of population which would lose coverage in each state under either a full or partial repeal scenario:

UPDATE 01/05/16: I've modified the spreadsheet to reflect several significant updates since the original version last month. My estimate of the number of highly-subsidized exchange enrollees losing coverage is down a few hundred thousand...but the number of Medicaid enrollees who'd lose coverage is dramatically higher due to yesterday's revelation that 1.6 million+ additional New Yorkers enrolled in Medicaid would lose their coverage under an ACA repeal than I had previously thought. These folks are listed in the "Young Adults/Other" column due to the unique circumstances at hand. New Yorks' Basic Health Plan enrollment also appears to be about 200,000 higher than I thought.

As a result, the grand total at risk now stands at up to 24.7 million people under my scenario (still around 30 million under the Urban Institute's).

I've already updated the New York infographic below; I'll update the other states as soon as possible.

UPDATE 01/06/16: (sigh) with even more recent figures being released by New York, the grand total has risen further, and is now up to over 25 million

UPDATE 01/12/16: I've made some minor updates based on revised estimates of March 2017 exchange enrollments; I've also added the names and parties of the U.S. Senators up for re-election in 2018. Note that all eight Republican Senators up for re-election in 2018 just voted to strip away healthcare coverage from these people last night without any replacement plan in place (although this is only the first of a series of votes/steps before ACA repeal is assured). Every Democrat voted to keep these peoples' healthcare coverage in place.

UPDATE 02/06/17: Most of the states have been updated now that the final 2017 Open Enrollment Period enrollment data has been released, along with some updated Medicaid expansion data. The high-subsidy exchange enrollees are down to around 8.2 million, but the Medicaid expansion numbers have climbed a bit to around 14.5 million. The grand total now stands at about 24.9 million nationally.

I'll be making one more batch of updates as the remaining state-based exchanges report in with their final numbers for the Open Enrollment Period (I'm still missing final numbers for Connecticut, DC, Idaho, Massachusetts, Minnesota, Rhode Island and Vermont).

UPDATE 02/13/17: I've made some minor revisions now that every state's final numbers are in except for Vermont. Not much changed; still around 14.5 million Medicaid, 8.2 million high-subsidy exchange policies, and (potentially) 1.4 million young adults:

UPDATE 02/19/17: Several major updates to the Medicaid expansion numbers for Indiana, Louisiana, Nevada and especially Massachusetts (expansion numbers have increased significantly since earlier reports for IN/LA/NV, and it turns out at least 190,000 Massachusetts residents were added to Medicaid ("MassHealth") specifically due to the ACA expansion provision after all.

With all of these updates, the grand total now stands at: ~14.9 million via Medicaid expansion, ~8.2 million high-subsidy exchange enrollees, ~750,000 BHP enrollees in MN/NY and (possibly) ~1.4 million young adults on their parents' plans, which add up to either 23.9 million or 25.3 million people, depending on whether you count the "young adult" category or not. 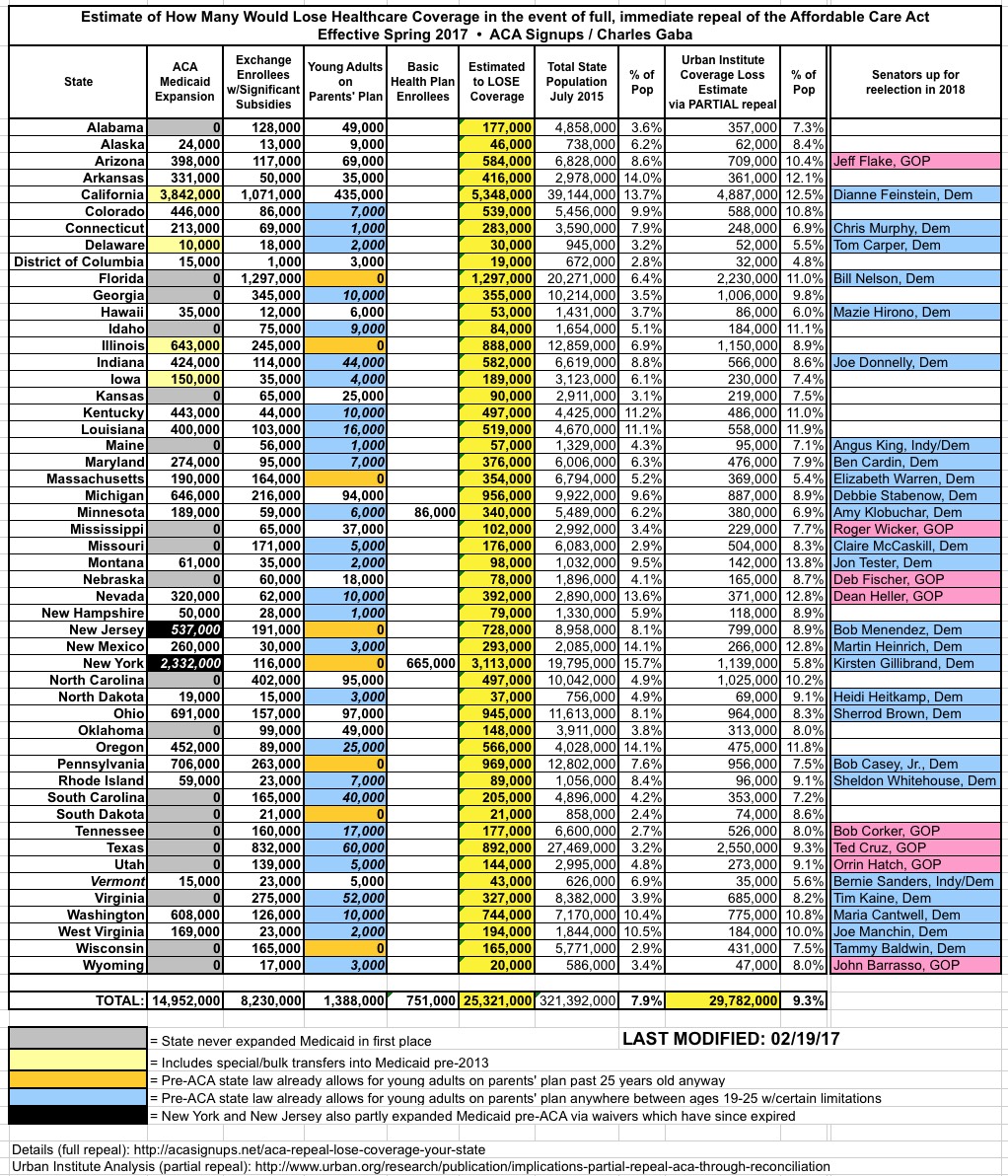