The Republican Party could've Gotten Smart. Instead they're choosing KAOS.

For weeks now, one of the rallying cries in Congressional and Senatorial Town Halls across the country has been "Care, not Chaos!". There's a whole website about it and everything. There's a bunch of different organizations dedicated to preserving the Affordable Care Act...but some of them are taking a different approach, by reasonably stating that if the GOP is absolutely dead-set on repealing the law, they should at least make sure there's a decent replacement plan ready to go the moment that the ACA is shredded:

Thirty million people will lose their health insurance. Insurance premiums will skyrocket. Hospitals will lose billions. And if the Medicaid program is cut, state and local governments could raise taxes on hardworking families to make up the difference.

We must work together to make healthcare better and more affordable for all. Our healthcare system is far from perfect, but repealing our healthcare without an immediate replacement plan that protects our care will put the health and financial security of millions of Americans at risk.

Well, despite of moderate (or at least what passes for moderates in the GOP these days) Senators like Susan Collins and Lisa Murkowski stating that they refuse to vote for any bill which defunds Planned Parenthood...and despite absolutely no agreement whatsoever among the House GOP about what the replacement bill should look like, it looks like Paul Ryan and Mitch McConell have decided to go with a "damn the torpedoes!" approach:

WASHINGTON—Republican leaders are betting that the only way for Congress to repeal the Affordable Care Act is to set a bill in motion and gamble that fellow GOP lawmakers won’t dare to block it.

Party leaders are poised to act on the strategy as early as this week, after it has become obvious they can’t craft a proposal that will carry an easy majority in either chamber. Lawmakers return to Washington Monday after a week of raucous town halls in their districts that amplified pressure on Republicans to forge ahead with their health-care plans.

Republican leaders pursuing the “now or never” approach see it as their best chance to break through irreconcilable demands by Republican centrists and conservatives over issues ranging from tax credits to the future of Medicaid.

They need at least 50 votes in the Senate. Assuming the bill does defund Planned Parenthood and Collins and Murkowski keep their word (?), that means they can only lose one more vote on that side of the aisle...and this is just to do the "partial" repeal, keep in mind.

On the House side they can only lose 22 GOP members...which presents a problem, because aside from every other issue (Medicaid, etc), the 2015 GOP repeal bill included killing Planned Parenthood funding...and the GOP's House "Freedom Caucus", which includes about 40 members, has stated point-blank that they refuse to accept anything less extreme than the 2015 bill.

At least one highly experienced Republican warned recently that the outcome is far from certain.

“In the 25 years that I served in the United States Congress, Republicans never, ever, one time agreed on what a health-care proposal should look like,” former House Speaker John Boehner (R., Ohio) said at a health-care conference in Florida. “Not once.”

Oh, and just what happens if they do somehow manage to thread the needle perfectly and push through both a full ACA repeal and the deplorable replacement plan that they supposedly have in mind?

Well, a report leaked over the weekend from Avalere Health and McKinsey & Company (both of which I've referenced here several times before, and both of which are pretty well-respected in the healthcare analysis field) took a look, and it's not pretty:

A sobering report to governors about the potential consequences of repealing the Obama-era health care law warns that federal spending cuts probably would create funding gaps for states and threaten many people with the loss of insurance coverage.

The Affordable Care Act has two main components for expanding coverage: subsidized private health insurance available in all 50 states, and an optional Medicaid expansion that has been accepted by 31 states and the District of Columbia. Those two components of the health law cover more than 20 million people.

A report by the consulting firms Avalere Health and McKinsey & Company concluded that the changes under consideration by the GOP-led House would reduce significantly federal dollars for Medicaid and subsidized private insurance.

Sarah Kliff of Vox posts a few of the key slides from the presentation:

An additional 115,000 people in that hypothetical state may also lose coverage because they are enrolled in Medicaid and cannot find an affordable private plan. 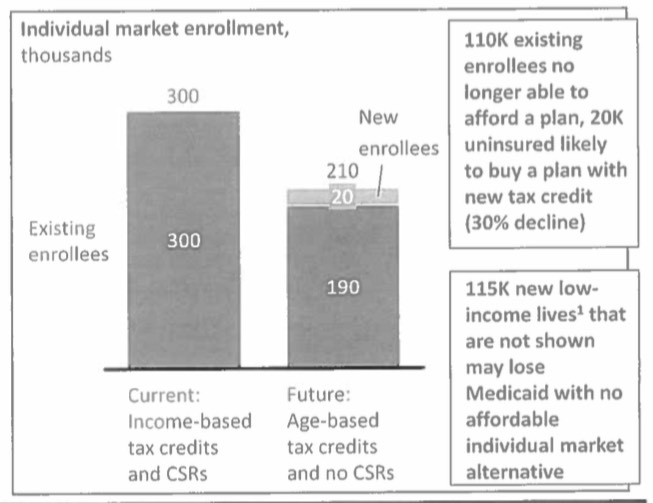 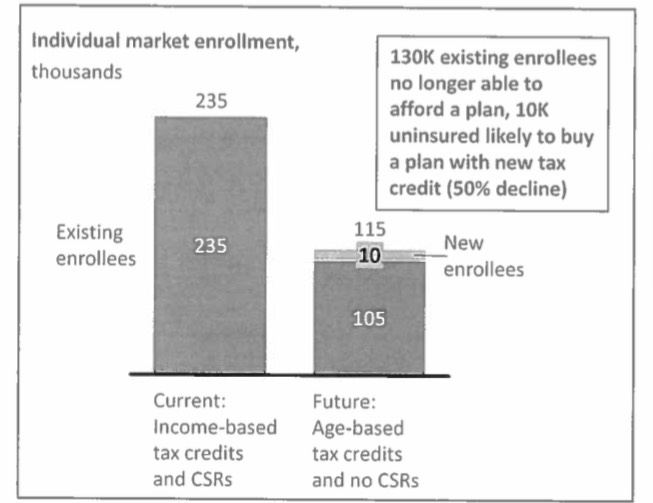 Now, it's important to note (as McKinsey does) that...

...results vary significantly state by state, so the illustrative examples cannot be extrapolated to national impact. And, it must be viewed in full context with the range of potential changes states may choose to take, which includes a number of potential reforms that could reduce the costs of care and dramatically improve coverage.

In other words, if California does end up pushing through their new Single Payer initiative after all, the number of people without healthcare coverage would obviously look very different once the dust settles than if they don't, and so on.

HOWEVER, just for the hell of it, what would these projections look like assuming...

Well, as far as I can tell, it looks like it would amount to roughly:

The first two would add up to around 7.5 million people currently on the individual market losing coverage nationally, or around 40% of the total.

In other words, a flat extrapolation seems to suggest up to 15 million people losing coverage even with the GOP's replacement bill in place.