North Carolina: Here's the ~459,000 residents who could lose coverage, by county

In the case of North Carolina, assuming 626,000 people enroll in exchange policies by the end of January, I estimate around 459,000 of them would be forced off of their policy upon an immediate-effect full ACA repeal.

As noted in the graphic, it's also important to note that newly-elected Democratic Governor Roy Cooper has officially started the process of fully expanding Medicaid to around 650,000 North Carolina residents. However, this is gonna be a nail-biter for two reasons: First, because there's a 10-day process before the request can be reviewed/approved by the HHS Dept. (it was filed on January 6th, so that leaves just 4 days for the HHS Dept. to review/approve/deny the request before Donald Trump takes office). Second, Cooper's move directly challenges a law passed by the NC Republicans which specifically precludes him from doing just this; Cooper is challenging the law's validity.

Assuming the Medicaid expansion survives, it would likely be a few months before it was actually implemented (I assume there's various legal stuff which has to take place first at both the state and federal level), during which time there's the possibility of Congress repealing the ACA anyway (or at least crippling it), which, of course, is the whole point of this blog post in the first place. I have no idea what the county-by-county breakout of that 650K figure is, however. 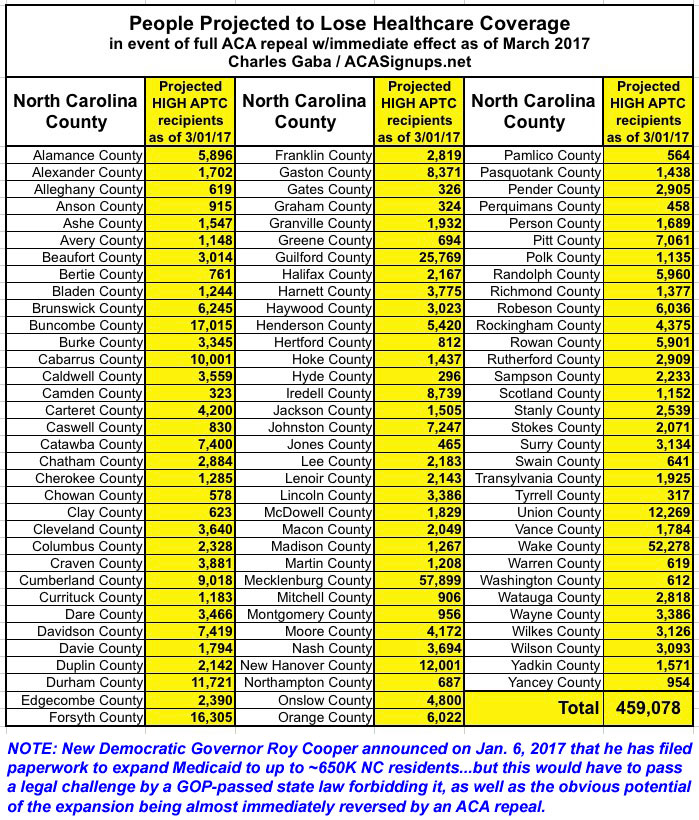