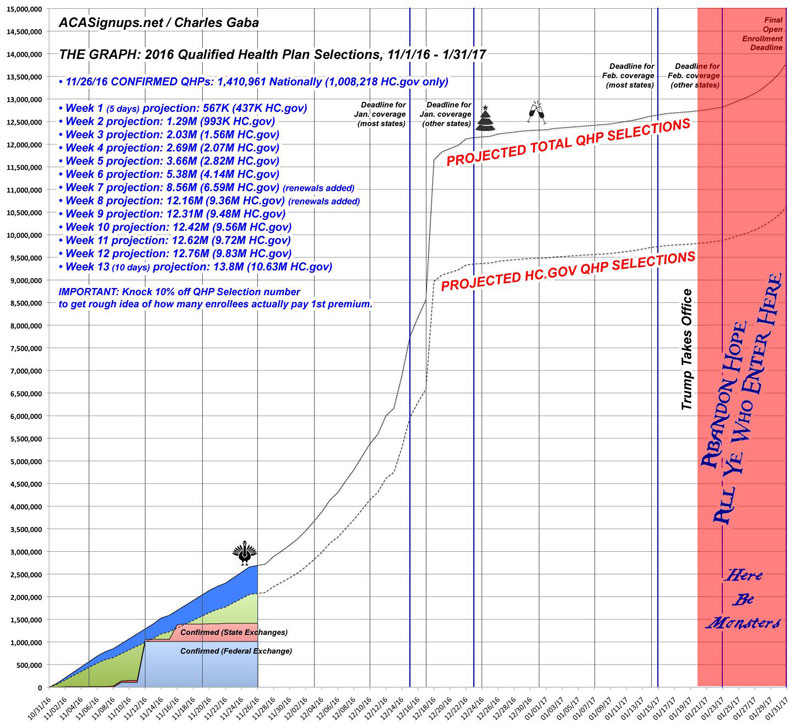 Over 2.1M people have selected 2017 plans thru @HealthCareGov in month #1 of Open Enrollment. Up 97K from month #1 last year. #GetCovered

Here's the actual press release from CMS. The actual number is 2,137,717 net QHP selections via HC.gov, or about 3.2% higher than my cumulative Week 4 projection of 2.07 million:

WEEKS 3 AND 4, NOV 13 – 26, 2016 Four weeks into Open Enrollment, millions of Americans continue to visit HealthCare.gov and sign up for Marketplace plans, demonstrating the strong demand for quality, affordable coverage. Over 2.1 million people have selected plans using the HealthCare.gov platform since Open Enrollment began on November 1, including over half a million new consumers and 1.6 million consumers renewing their coverage. Enrollments for these two weeks represent an increase of 167,000 plan selections versus the third and fourth weeks of Open Enrollment last year. In addition, the total number of plan selections at this point exceeds last year by over 97,000, even though this year’s totals include two fewer days. In addition to national data, this snapshot includes state-by-state plan selection estimates for those states using HealthCare.gov.

...As in past years, enrollment weeks are measured Sunday through Saturday. Since this year Open Enrollment began on a Tuesday, the cumulative totals reported in this snapshot reflect two fewer days than last year’s Week 4 snapshot, yet enrollment exceeds last year’s total. 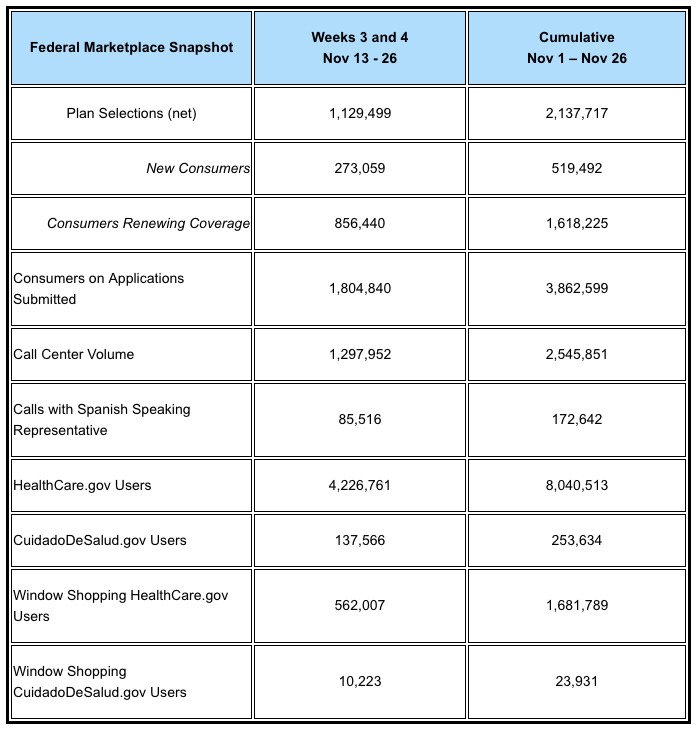 On the renewal side, you'd expect the renewing numbers to be somewhat higher since, again, there are more current enrollees to begin with, and sure enough, there have been over 22% more active renewals so far this year than last.

In other words, current enrollees are acting more quickly to renew than they were last year, but new enrollees are slower to sign up so far, causing a near wash overall to date.

Update: As you can see in the comments below, this could be a portent of trouble ahead; it's possible that the "front-loaded" renewal rate is masking a significant drop-off in new enrollments. If that's the case, it's possible that the numbers could "flatline" once the auto-renewals are added in around December 17th or so, making the "higher" early numbers a bit of a fake-out. Still too early to tell, however.

As noted, CMS has also finally started providing a state by state breakout of the HC.gov enrollees: