Last year I took a shot at predicting not only total Open Enrollment QHP selections nationally, but also on a state-by-state basis. Seeing how I ended up overestimating by a whopping 2 million people nationally (projection: 14.7 million; actual: 12.7 million...about a 16% difference), it shouldn't be surprising that I was also way off on most of the individual states.

I was therefore understandably hesitant to put my neck out there again this year...and after the unexpected results of the Presidential election, all bets seemed to be off. However, seeing how the first couple of weeks of OE4 seem to be holding pretty closely to my national projections so far, I've decided to go ahead and post my state-level calls after all.

There's no great trick to my methodology. My national projection (13.5 - 14.0 million) lines up almost perfectly with the HHS Dept. this year (13.8 million), so that's where I started...assuming a national QHP selection bump of around 8.7% over last year (13.8 million vs. 12.7 million). I tacked 8.7% onto each state's OE3 total to get a baseline projection.

After that, I bumped my estimate for each state up or down depending on a variety of factors, including:

With all of these taken into account, here's what I've come up with. I obviously could end up being way off on any number of these, but at least it gives me something to base the progress of the enrollment period on: 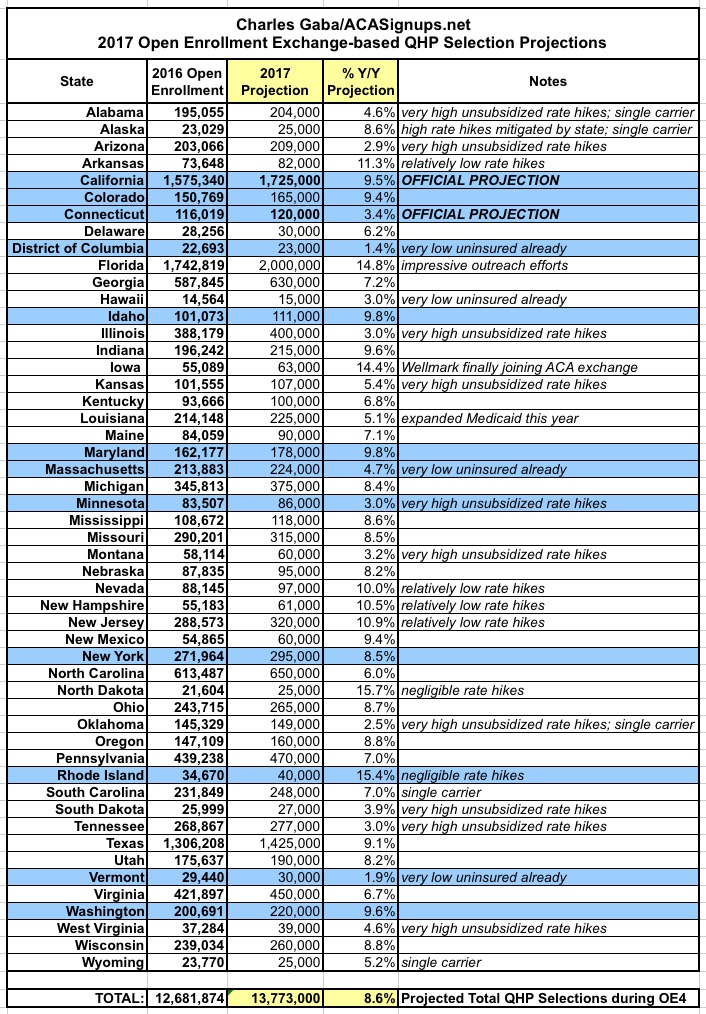 As of midnight tonight (Saturday, Nov. 26th), I estimate there should be a grand total of roughly 2.69 million QHP selections nationally, or 19.5% of the eventual total, with 2.07 million of those being run through the federal exchange (HC.gov).

For the state-based exchanges, I only have hard numbers from five of them:

However, without the state breakout of the 39 states on HC.gov, I can't really see any larger trends as of yet. They should be releasing a Snapshot Report for Weeks 3 & 4 sometime this week, hopefully with a state breakout which will let me  see how things are shaping up so far.