OK. Last week I wrote up a post speculating about the potential impact to the state- and national-level average rate hike requests of Aetna dropping out of the ACA exchanges in 11 states. My conclusion was that the average will increase in some states...but may actually drop in others, since Aetna would otherwise have asked for rate hikes higher than the average requested by the other carriers in that state. Of course, this isn't really a positive development, since their current enrollees are still losing their plans entirely, and since a 50% hike from Aetna could still end up costing less than a 10% hike from one of the other carriers...but as always, this is the best I can do here.

With that in mind, I've gone back and actually removed Aetna from a bunch of state spreadsheets to see what the hard impact is overall. In addition, I've also cleaned up the tables for some other states to remove smaller carriers who have announced that they're dropping out as well. For instance, in Michigan, Priority Health Insurance is out (but Priority Health HMO is still in). In New Mexico, Presbyterian is off the exchange. In Texas, Scott & White is out, and so on.

It should also be noted that there are also some cases where carriers are expanding into new states (or new counties in states they're already participating in). For instance, WellMark is joining the exchange in Iowa, while Cigna is expanding into Chicago, North Carolina and northern Virginia. However, I have no easy way of reflecting these in the Rate Change project, since the plans being offered by these carriers are, by definition, brand new; there's no existing premium average to measure them against.

With all that in mind, here's a whole mess of revised/updated requested rate change tables for various states. The updated numbers will be plugged into the 50-state spreadsheet, with higher averages colored in pink while lower averages are colored light green. 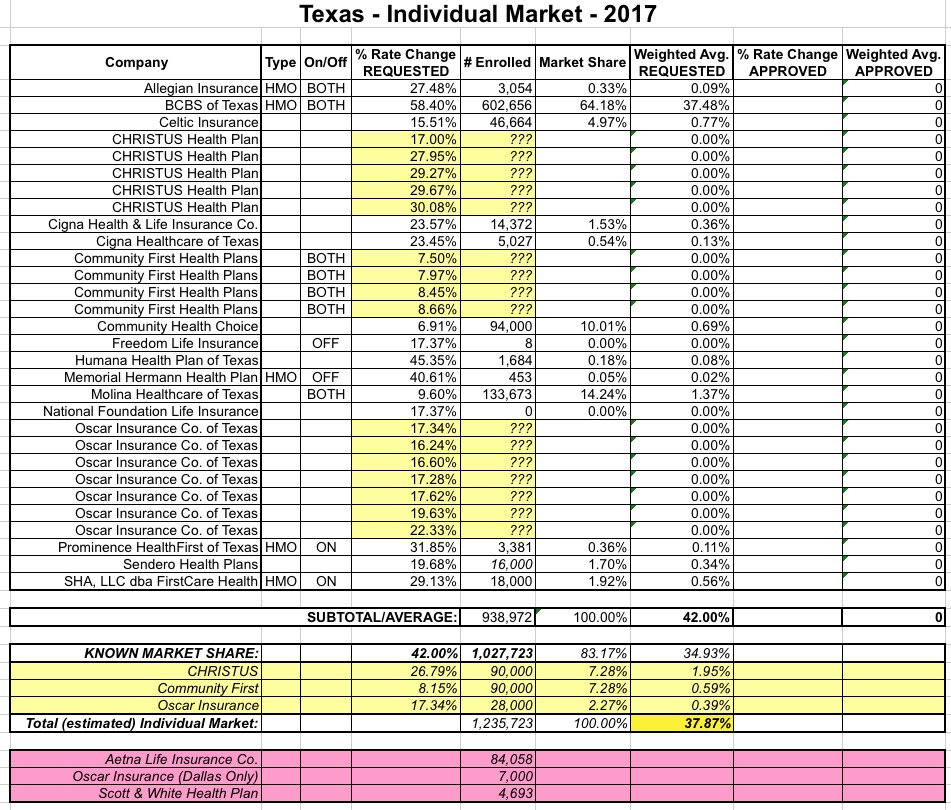