This year, as of the end of the 2016 Open Enrollment Period on January 31st, just shy of 12.7 million people (12,681,874 to be precise) had selected Qualified Health Plans (QHPs) via either the federal exchange (HealthCare.Gov) or one of the dozen or so state-based exchanges (Covered California, kynect, MNsure and so forth). A flat 13% drop should have resulted in the number still effectuated as of the end of the first quarter (3/31/16) having dropped to just barely over 11.0 million (11,033,230 to be precise).

Throughout late April and early May, I ran various projections based on partial data from a handful of state exchanges which were still posting their enrollment data publicly during the off-season. My conclusion was that the 3/31/16 effectuation number should be somewhere between 11.0 - 11.4 million, but was most likely somewhere around 11.2 million.

Well, today, the CMS division of the HHS Dept. released the actual Q1 effectuation report, and I was pretty close after all:

On March 31, 2016, about 11.1 million consumers had effectuated Health Insurance Marketplace coverage – which means those individuals, paid their premiums and had an active policy as of that date. [i] HHS continues to project effectuated enrollment of about 10 million people for the end of 2016.

Of the approximately 11.1 million consumers nationwide with effectuated Marketplace enrollments at the end of March 2016, about 85 percent, or about 9.4 million consumers, were receiving an advance payment of the premium tax credit (APTC) to make their premiums more affordable throughout the year. The average APTC for those enrollees who qualified for the financial assistance was $291 per month.[ii]

March effectuated enrollment equaled 87 percent of total Open Enrollment plan selections, within the 80-90 percent range that Marketplace issuers have consistently anticipated and the same percentage as last year, despite factors that might have been expected to lower the percentage. For example, a higher proportion of consumers this year signed up for January 1 coverage, creating a longer window between their initial plan selection and March in which they could have gained employer or other coverage.

The Marketplace effectuated enrollment snapshot provides point-in-time estimates. CMS expects enrollment numbers will change over time as consumers find other coverage or experience changes in life circumstances such as employment status or marriage, which may cause consumers to change, newly enroll in, or terminate their plans.

This part is a bit of a bummer, however:

OK, here's what this means: Since people are constantly signing up (thanks to SEPs) and dropping coverage throughout the course of the year, the hard number of people effectuated is a constantly moving target. Most people will be covered for the full year (January through December), but others might sign up in February and drop their coverage in August, while someone else could sign up in May and keep their coverage through the end of December. As a result, the average number of people enrolled in effectuated policies month to month is a more accurate measure of how things are going...and this is the number that the CBO uses for their projections, since that's based on a full-year monthly average.

In fact, the infamous "7 MILLION ENROLLMENTS!!" figure which everyone was so worried about back in 2013-2014 had little to do with the number of people who selected plans during open enrollment. The "7 million" actually referred to the average number of people the CBO expected to be enrolled in effectuated policies throughout the full fiscal year. As it happens, while over 8 million selected policies as of the close of the first open enrollment period, the average number enrolled throughout the full year was more like 5.5 million...mainly because 40% of enrollees didn't even start coverage until April or May due to the early technical problems in the fall of 2013.

For 2015, the monthly average was roughly 9.3 million...70% higher, mainly because the actual number of people who signed up was higher (11.7 vs. 8.0 million, about 46% higher), but also because the bulk of enrollees started their coverage much earlier (January/February instead of April/May).

CMS is saying that going forward, they'll be putting more focus on this monthly average.

Along with this effectuated enrollment report, we are also releasing an addendum (below) providing updated data on special enrollment period activity in 2015, as well as an analysis of the reduction in the number of consumers experiencing coverage terminations or adjustments to financial assistance due to unresolved data-matching issues.

The following tables are included in the March 2016 Marketplace Effectuated Enrollment Snapshot:

Of the approximately 11.1 million consumers who had effectuated Marketplace enrollments at the end of March 2016, about 85 percent or about 9.4 million consumers were receiving APTC[iv] and 57 percent or nearly 6.4 million consumers were benefiting from cost sharing reductions (CSRs) to make their coverage more affordable. CSRs are generally available if a consumer’s household income is between 100 percent and 250 percent of the Federal Poverty Level (FPL), the consumer is otherwise eligible for APTC, and the individual chooses a health plan from the silver plan category.

The low numbers make sense for New York and Minnesota due to both states having Basic Health Plans in place, but what's up with DC only having 7% receiving APTC? Well, DC has the most generous Medicaid eligibility levels in the country: 319% of the Federal Poverty Level for kids, 210-216% FPL for adults.

UPDATE: OK, in addition to the higher Medicaid threshold, Louise Norris reminds me that DC (along with Vermont) has no off exchange market...all individual and small group policies have to be sold via the DC exchange. That means more full-price QHP enrollees, which in turn further dilutes the percent receiving tax credits. Finally, Norris notes that DC has a higher household income average than Vermont as well, further reducing the number who would qualify for APTC. 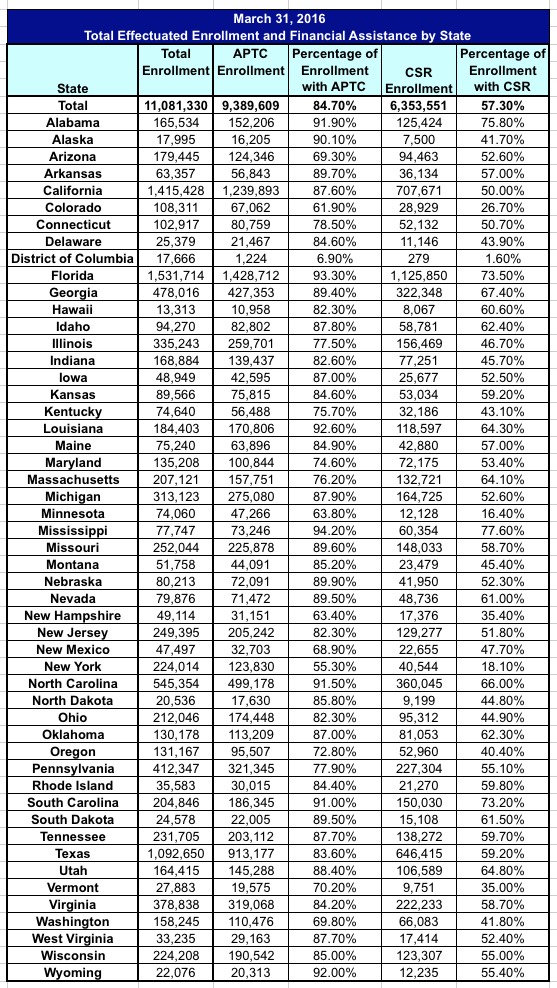 Consumers with household incomes between 100 percent and 400 percent of the FPL may qualify for APTC, which helps make their coverage more affordable throughout the year by lowering their share of monthly premium costs. Consumers who qualify for APTC may choose how much of the APTC to apply to their premiums each month, up to the maximum amount for which they are eligible.

The overall average APTC Marketplace consumers received was $291 per month at the end of March 2016. Because the amount of APTC an enrollee may receive depends on household income and the cost of the second lowest cost Silver plan available to the enrollee, the average APTC ranged from $750 per month in Alaska to $178 per month in New York.

There are four “metal levels” of coverage available through the Marketplace, plus catastrophic plans. Plans in each category can be expected to pay different amounts of the total costs of an average person’s care. This takes into account the plans’ deductibles, copayments, coinsurance, and out-of-pocket maximums. The actual percentage a consumer pays in total or per service will depend on the services used during the year.

NOTE: I'VE MOVED THE "DATA MATCHING" AND "SEP ANALYSIS" PORTION OF THIS POST TO A NEW ENTRY SINCE THIS ONE WAS GETTING TOO LONG.