One of the biggest challenges the HHS Dept. has encountered when it comes to enrolling people in ACA exchange policies has been encouraging (or "goading" depending on your POV) millennials into signing up. This is important for several reasons:

Anyway, the actual percentage of Young Adults has remained consistently at around 28%, about 30% lower than officials keep hoping for in order to ensure a fairly stable risk pool. The youngins' just don't seem to be diving into the risk pool the way that HHS keeps hoping, so this fall, they're upping their outreach game in several ways:

Today, we are announcing a series of actions to step up Marketplace outreach, especially to young adults, for the 2017 Open Enrollment. Highlights include:

The press release goes into quite a bit more detail on each of these programs/initiatives, but you get the idea. How effective will it all be? I have no idea, but it certainly shouldn't hurt.

Oh, one more thing: Every once in awhile, a new survey/report will come out claiming the "Uninsured Rate in America" to be some percentage or another. This percentage can have a pretty wide range depending on your source; Gallup's latest survey lists it as 11.0% as of the end of March 2016, while the CDC's National Health Interview Survey had it as low as 9.1% as of last fall.

Obviously there are a lot of variables at play here, including the different dates (NHIS was from before 2016 open enrollment; Gallup is from after it ended), methodology, the wording of the question and so forth. However, the single biggest detail to look for in my book is always whether the survey includes children and senior citizens or not (as well as whether it includes undocumented immigrants).

To illustrate this, here's a graph from CMS's "Young Adult Outreach" entry which shows the uninsured rate of everyone in the country by how old they are: 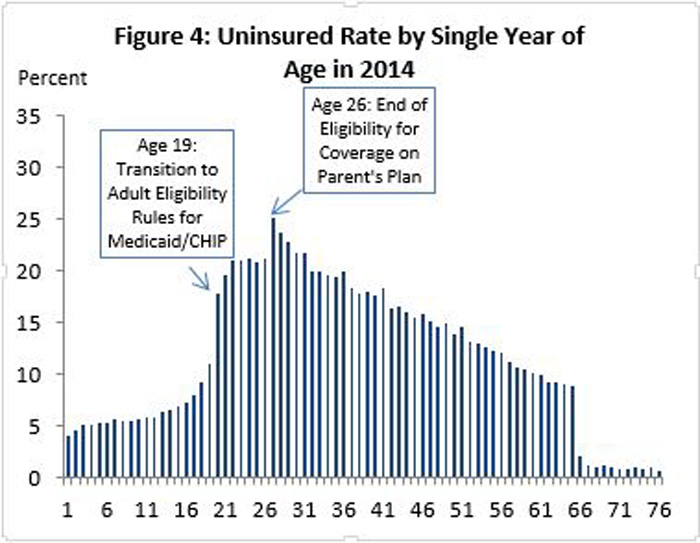 CMS used this to illustrate the importance of targeting young adults, and I agree...but it also serves to illustrate my point above. Notice how the uninsured rate hovers in the 5-10% range for children under 18, then shoots up to the 18-25% range for young adults (who, ironically, are themselves between around 18-25) before gradually dropping off to around 10% again as people hit their mid-60's...and finally, plummets off a cliff to just 1-2% for those over 65, as Medicare kicks in.

If you don't include children under 18 or seniors over 65, you're obviously going to come up with a much higher uninsured rate than if you include everyone.