It's important to note that although the article claims that the carriers have submitted their 2017 rate requests, running a search on the CA DOI website doesn't bring up anything for next year as of yet, so either that 8% estimate is an educated guess on the part of the CoveredCA board, or they got a sneak peak at the filings before their added to the public database (or somewhere in between).

The loss of the reinsurance and risk corridor program at the end of this year (the second of which was already pretty much kneecapped by Marco Rubio & friends in December 2014 anyway) have been documented by Margot Sanger-Katz noted in the New York Times last week and were given a mention by Larry Levitt at Vox.com this morning.

I'm going to plug the 8.0% figure into my 2017 Rate Request project for the time being, but won't be doing a full write-up on California until I can see the actual rate request filings. 8% would actually be exactly the same as the weighted average rate hike on the entire individual market nationally this year...but as noted in the lede, it's still twice as much of an increase as California had in 2015 and 2016, so it's still considered negative news.

As for actual enrollment, there's some positive news to report here, even in the midst of negative spin:

A bigger concern, Laszewski said, is the tepid growth in Covered California’s enrollment and what that may mean for future premiums.

As part of its proposed budget for the next fiscal year, starting July 1, the state exchange expects its annual enrollment to grow by only 2 percent over the next year to 1.34 million. Covered California counts about 1.4 million as currently enrolled but that figure is expected to drop to 1.32 million as of June 30 through normal attrition as people get insurance elsewhere or drop coverage.

Laszewski is correct that a 2% year over year enrollment increase is pretty disappointing (for comparison's sake, CA was hoping to hit 1.7 million QHP selections, or around 1.5 million effectuated enrollees, in 2015). However, there's something important to note here: 1.4 million currently enrolled. I assume "currently" means "as of late April/early May". If so, that means that Covered California has only experienced around an 11% net attrition rate from the 1,575,340 people who selected plans during OE3.

Even if the 1.4 million number was only as of the end of March, that's still good news, as it suggests that the national effectuation rate at the end of March, which I had been concerned might have fallen below the 11 million mark, should still be at around 11.2 million or so: 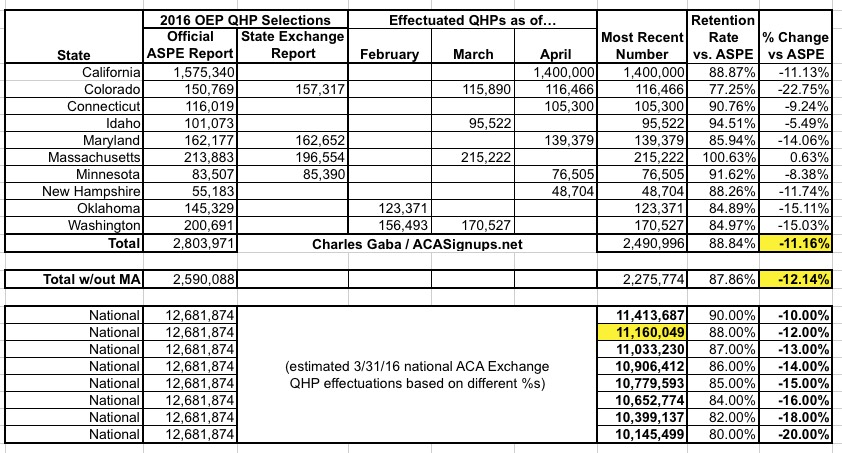 The 1.32 million June projection is a bit more concerning compared to last year, as that would represent a 16.2% net drop, versus 2015's 14.9% mid-year drop nationally.

About 3 million Californians remain uninsured, but fewer than 1.4 million of them are eligible for premium subsidies under the Affordable Care Act, according to the exchange’s proposed budget.

That's actually great news in a way...it means that there's still ample room for growth on the exchange, up to twice the number currently enrolled.

The average tenure of a Covered California enrollee is about 25 months, according to exchange data.

That's somewhat reassuring. Remember, the exchanges have only been operating for 28 months, so this suggests that in California, at least, the vast majority of enrollees are not "dumping" their policy as soon as they've racked up expensive treatments. It'll be a few more years before this data is representative, however.

Over time, Covered California expects the gradual increases in the state’s minimum wage to $15 an hour could shift more low-income people from Medi-Cal, the state’s Medicaid program, to subsidized exchange policies as their pay increases. By 2020, the exchange expects to reach enrollment of 1.52 million.

The minimum wage thing is really important, and, if it plays out as they expect, would prove an important point in this TED Talk given by Nick Hanauer a couple of years back.

The exchange is planning to draw on $58 million in reserves for operations, and it wants to raise its surcharge on customer policies to 4 percent of premiums, up from 3.4 percent now, or $13.95 per member per month.

This is the first year that CoveredCA has to be fully self-sufficient, so it's understandable that they're bumping up their fees a bit. For comparison, HealthCare.Gov charges 3.5% of premiums.

Here's a graph showing their enrollment projections over the next 5 years (unfortunately the original was pretty low-res, so I had to stretch it out: 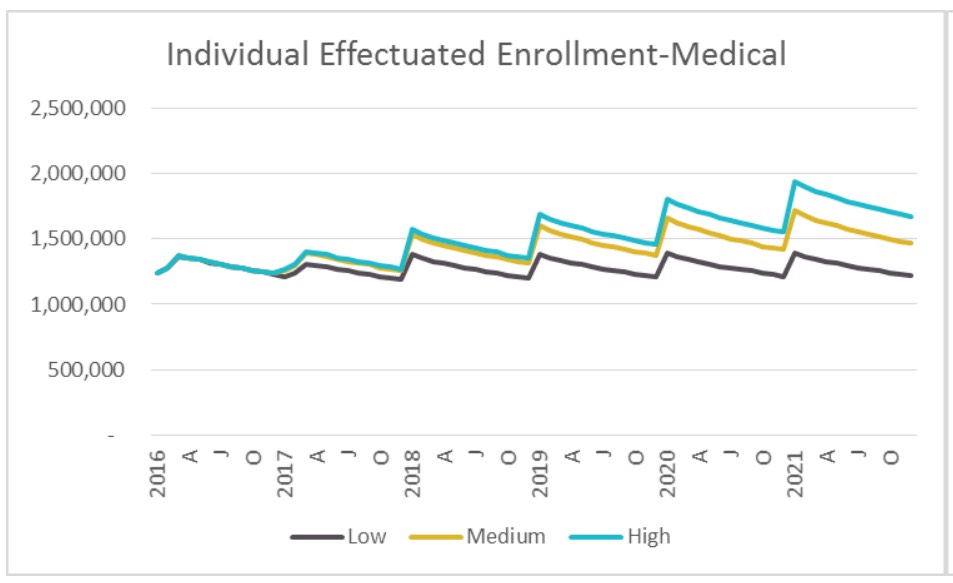 Here's a table showing their projections for the impact of CA's $15 minimum wage, which is being phased in over several years...looks like they're expecting up to 200,000 Californians currently on Medicaid to see their wages increase enough to kick them off of the program and onto subsidized private policies:

Among the lessons learned from previous years is that 80 percent of new enrollees during open enrollment will pay at least their first month’s premium. Likewise, during special enrollment on average 69 percent of enrollees will make their first payment. These rates are comparable to those used in previous forecasts.

Nationally, the number has been closer to 90% in other states, although CA did report an 82% payment rate in late 2014 (after having repeatedly insisted it was 85% that spring). Not sure what that's about. The 69% figure is the first time I've heard of there being a payment rate discrepancy between on and off-season enrollment.

There's also a hell of an eye-opener regarding CoveredCA's SHOP enrollment projections (SHOP = the ACA's Small Business exchange, but CoveredCA changed the name to "Covered California for Small Business" or CCSB for some reason). Check this out:

While start up challenges in 2014 hampered initial sales and retention, service improvements are beginning to be reflected in expanded enrollment in CCSB. Broker engagement, which is the channel responsible for the vast majority of small business enrollment across the market, is growing.

Overall, CCSB enrollment is expected to rise through 2020 due to the positive impact of the following factors: 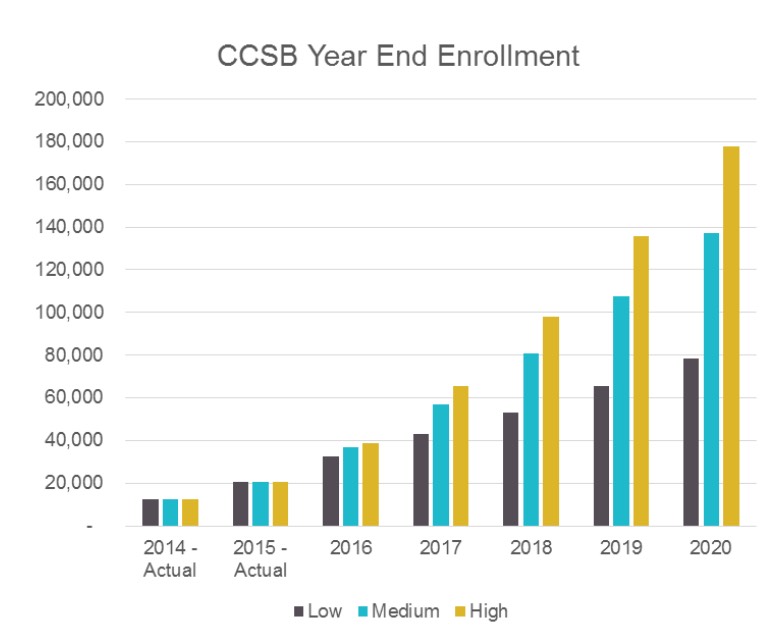 Wow. Considering that the national SHOP enrollment number is likely only around 120,000 or so at the moment, this is a hell of an optimistic projection--their mid-range is more than that by 2020 in California alone. Of course, extrapolated nationally that would still only be around 1 million people, but that would still be a good 8x increase over today.

Anyway, I'm sure there's a whole mess of other stuff, but that's it for me.