UPDATED: UnitedHealthcare lowers the boom: Pulling out of exchanges in most states, as expected

UPDATE: Zachery Tracer of Bloomberg News and Phil Galetitz of Kaiser Health News have confirmed that UnitedHealthcare will stay in Virginia and Nevada next year, but they won't stay around in Connecticut. More details as they come in....

Update 4:10pm: According to Zachery Tracer, UnitedHealthcare to pull out of Texas, Pennsylvania, North Carolina, Tennessee and Missouri as well.

Update 7:05pm: OK, Tracer has updated his list of the states United won't be in next year:

UnitedHealth didn’t name the Obamacare markets that it’s exiting, though regulators have confirmed at least 13 withdrawals from the 34 states where the company sold plans this year. The insurer won’t sell individual ACA plans for 2017 in states including Connecticut, Missouri, Nebraska, North Carolina, Pennsylvania, Tennessee, Texas and Washington, regulators confirmed on Tuesday. In at least some of those states, UnitedHealth also is withdrawing from a related small business market.

Well, no one can say they didn't warn us: After announcing that they might drop out of the ACA exchanges last fall, and that they are dropping out of at least 5 states over the past couple of weeks (Georgia, Arkansas, Michigan, Louisiana and Oklahoma), during their quarterly financial conference call this morning, UnitedHealthcare announced that they plan on pulling out of most states next year:

UnitedHealth Group Inc., the biggest U.S. health insurer, said it will drop out of all but a “handful” of state exchanges where it sells individual Obamacare plans, acting on concerns it raised last year that the government program that has brought coverage to millions isn’t profitable enough.

Chief Executive Officer Stephen Hemsley said Tuesday that the company next year “will remain in only a handful of states.” The exchange market is proving to be smaller and riskier than UnitedHealth had expected, meaning “we cannot broadly serve it on an effective and sustained basis.” The company expects to lose about $650 million on the plans this year.

Hemsley spoke on a conference call as part of the company’s release of first-quarter results, which topped analysts’ profit estimates in part thanks to UnitedHealth’s consulting, technology and services unit, Optum.

The Patient Protection and Affordable Care Act, President Barack Obama’s signature domestic policy achievement, is projected to cover about 12 million people this year, according to the Congressional Budget Office, helping many afford private insurance using tax subsidies. It has proven volatile for health insurers selling coverage in the new markets, known as exchanges, with some reporting losses.

UnitedHealth already plans to withdraw from at least five states for 2017 after selling coverage in 34 states for 2016. The company said in December that it should have stayed out of the individual exchange market longer. UnitedHealth had about 795,000 customers of Obamacare’s exchanges as of March 31, and expects that number to fall to about 650,000 by December.

A lot to absorb here.

First of all, which states will they be participating in next year? So far the only evidence is out of Virginia, where they've submitted full rate filings for the individual market (on and off exchange) for 2017 already. This article's headline makes it sound like they're staying in Pennsylvania, but it turns out that's just speculation.

Second, the irony of complaining about losing gobs of money on the exchanges while simultaneously announcing huge profits overall is not lost upon me:

Earnings were $1.81 a share, excluding some items, UnitedHealth said in a statement, exceeding the $1.72 average of 24 analysts’ estimates compiled by Bloomberg. Changes to how the company accounts for taxes on stock-based compensation boosted adjusted earnings by 6 cents a share, UnitedHealth said.

Basically, the ACA exchanges are acting as a loss leader...except that unlike, say, an automaker who offers a low-end car in hopes that you'll upgrade to a more expensive, profitable model instead, United doesn't seem to see any way of "converting" their ACA enrollees over to profitable divisions. It's unlikely that a family is likely to say "our experience with UNH's indy market was so great, we're gonna contract with them for our small group plan when we open up a family restaurant 5 years from now!" (or, if they do, that'd have to happen a lot to justify the current losses, from UNHs point of view).

In light of this, let's take another look at that table from yesterday (I've highlighted the 2 additional states which UNH has actually announced they're pulling out of since I was sent the original version): 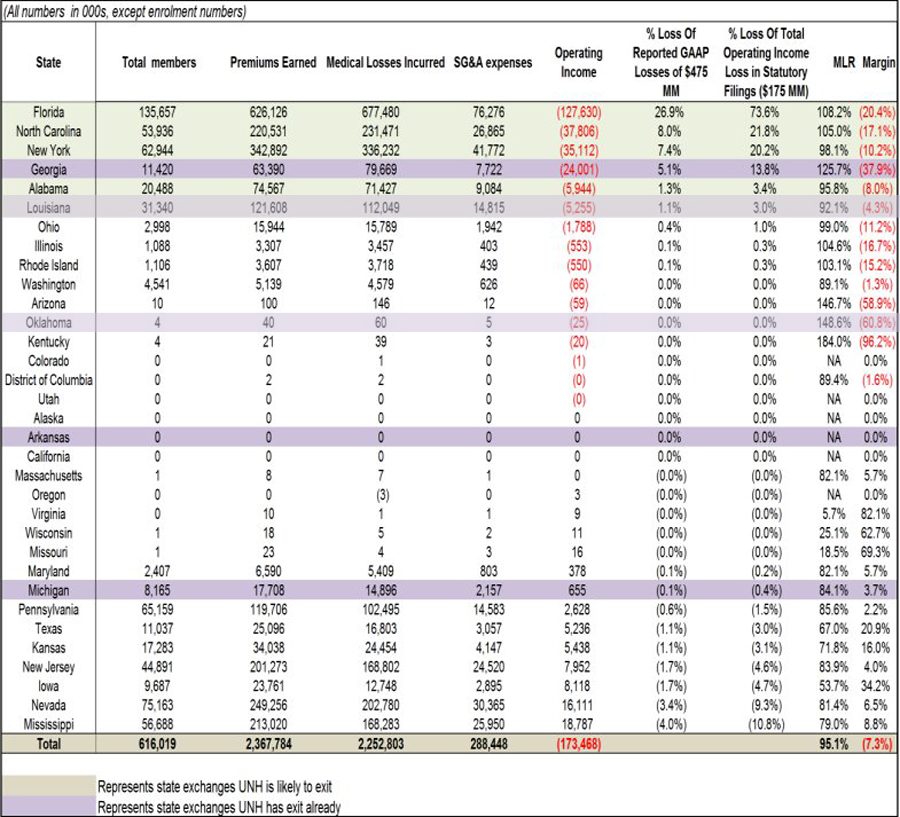 From the looks of it, the "handful" of states (besides Virginia) will presumably include the ones at the bottom of the list, where they pulled off a profit.

HOWEVER, it's important to keep in mind that according to the actual LeerInk research paper that the table above came from:

Here's what this means: Look at Mississippi, where UnitedHealthcare actually made $18.8 million in profit on the individual insurance market, based on around 57,000 enrollees.

I don't know what the differences are in the average health of those between 100-400% FPL and those above 400%, but my assumption is that those with a higher income tend to also be healthier and less desperate for medical care to begin with. If so, that means that insurance carriers still have a built-in "cherry picking" method even though they aren't allowed to ask nosey questions about medical history or pre-existing conditions: They can simply offer OFF-exchange plans only, knowing that the only ones who'll sign up are higher income and are therefore more likely to be lower risk.

"We find through detailed analysis of insurance statutory filings that in the key HIX States where UNH is losing money, other players AET (OP), ANTM (OP), HUM (OP) and the Not for Profit Blue Cross Blue Shield (BCBS) are also losing money, with margins ranging from -20% to -40% for a number of BCBS plans."

"We also expect that the path to stability of these marketplaces in 2017 is tenuous at best and will need to be subsidized by the $13B+ moratorium on the Health Insurer Provider Fee (HIPF) or tax holiday after phase-out of the $8B annual Reinsurance program.

"We see it more likely that the mega insurer deals between ANTM and CI (OP) and AET and HUM are approved, as the efficiencies through consolidation offer a transitory avenue to subsidize HIX losses.

"• We also believe that the anti-trust scrutiny of ANTM-CI and AETHUM is likely to be more favorable in the wake of the UNH HIX exits, as efficiencies through consolidation offer an avenue to subsidize losses and preserve access to HIX marketplaces (Exhibit 9)."

Ugh. They're basically saying that the only thing which they expect to save the carrier's bacon in these states is a) the moratorium on the carrier tax used to help fund the ACA itself and b) the impending megamergers of the major players. This is not good news.

As long as it's raining, it might as well pour: Here's LeerInk's analysis of the Blue Cross Blue Shield plans across a whole mess of states...not pretty at all: 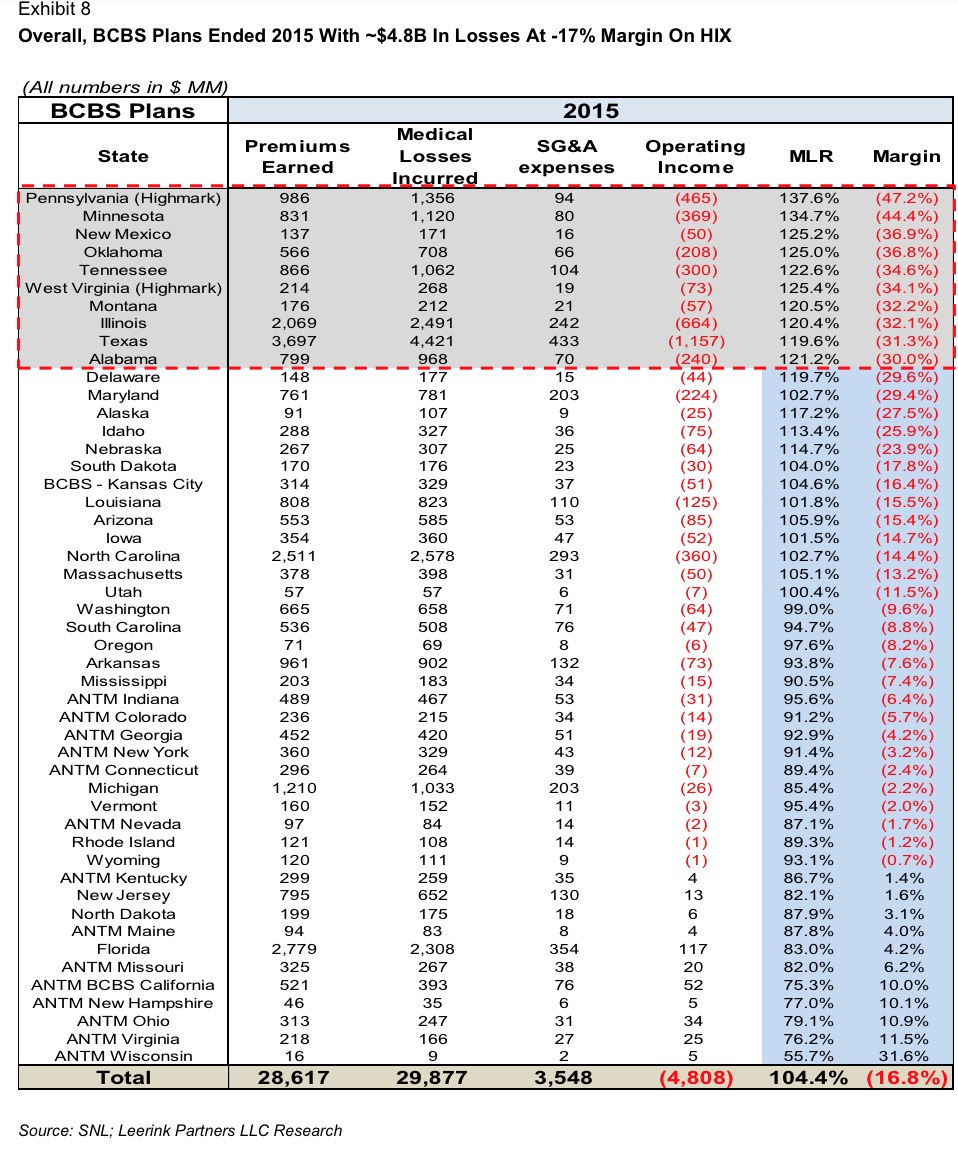 On the other hand, as Jeff Young notes over at Huffington Post:

But some insurance companies have earned profits on their exchange business, or at least are willing to sustain losses while the market matures, including Aetna, Anthem, Kaiser Permanente, Molina Healthcare and Centene. Aetna is seeking federal approval to merge with Humana, and Anthem needs the government’s OK to proceed with its plan to combine with Cigna, which could make these companies more likely to remain in the exchanges to keep favor with the administration.