KFF: ACA exchange enrollment likely to max out at 16.3 million

The Kaiser Family Foundation actually issued this report a few days ago, but I'm a little swamped lately:

As of the end of the third open enrollment under the Affordable Care Act (ACA), 12.7 million people had signed up for coverage in the health insurance marketplaces, up from 11.7 million last year and 8.0 million in 2014.

Actual enrollment will end up somewhat lower than this because some people will not pay their premiums or will have their coverage terminated due to inconsistencies on their applications, and there is typically additional attrition as the year progresses (e.g., as some enrollees get jobs with health benefits). For example, in 2015 paid enrollees totaled 10.2 million as of end of March and 9.3 million as of the end of September. If a similar pattern holds, actual enrollment should end 2016 over 10 million, which was the target established by the Department of Health and Human Services (HHS). (There are reasons to believe that attrition may be lower this year, including the fact that terminations occurring during open enrollment have already been subtracted from official signup figures, which was not the case previously.)

While enrollment is in line with the HHS target announced in advance of this year’s open enrollment, it is short of earlier projections by the Congressional Budget Office (CBO), which became an implicit yardstick for judging the law. In March 2015, CBO projected average monthly marketplace enrollment of 21 million in calendar year 2016, though recently lowered that forecast to 13 million.

In this analysis, we look at why enrollment may be lower than projected by CBO and discuss the potential for future enrollment growth.

The KFF team goes on to make many of the same factors that I pointed out last month for the underperformance of the ACA exchanges compared with the CBO's 21 million projection:

This was the fourth item on my own list. The CBO assumed that up to 6 million people currently covered by employer insurance would be kicked over to the exchanges; that hasn't happened as of yet. This is actually not a bad thing at all, atlhough it obviously isn't good for the exchange risk pool.

Update: Corrected per the comment below; it's possible that several million people will still shift from ESI to the exchanges throughout 2016, but so fare there's no evidence of this happening in significant numbers.

This was the fifth item on my list. Since most of the actual policies are pretty much identical both on and off the exchange, the only real reason for anyone to enroll via the ACA exchanges as opposed to directly through the insurance carrier itself is to receive financial assistance...which over 82% of exchange enrollees already do. Anyone who earns too much to receive tax credits might as well save themselves the extra hoop-jumping and enroll directly...which is why I never understood the CBO's assumption that several million higher-income people would choose to bother signing up via the exchanges.

Anyway, the KFF team estimates that the total potential market for ACA exchange enrollment is perhaps 27.4 million nationally (a bit higher than the 25.4 million I had estimated based on one of their earlier reports), of which around 46% have actually done so this year (12.7 million).

They go on to assume that if every state performs as well as the top 10 states did this year (roughly 59% of the total potential collective market in those states by their count), the "ceiling" for exchange enrollment is roughly 16.3 million people:

The 10 best-performing states – which include several large states such as Florida, North Carolina, and California — have collectively signed up 59% of the potential market. While that might appear to leave room for substantial further growth, there are reasons to believe that enrollment has close to plateaued in those states.

...However, there is still considerable room for enrollment growth among states that have enrolled a lower share of the potential market. If all states improved to at least the average of the 10 best-performing states, we estimate that total marketplace signups would reach 16.3 million. Assuming that around 10% of these people would not pay their first month’s premium, this would translate into an “effectuated” enrollment total of 14.7 million. This may provide a reasonable estimate of a ceiling on what marketplace enrollment could grow to over the next several years, assuming current levels of premium subsidies and outreach.

Again, KFF's more recent "potential enrollee" numbers have been updated (and increased by a couple million nationally) since I ran my numbers; here's what it looks like now: 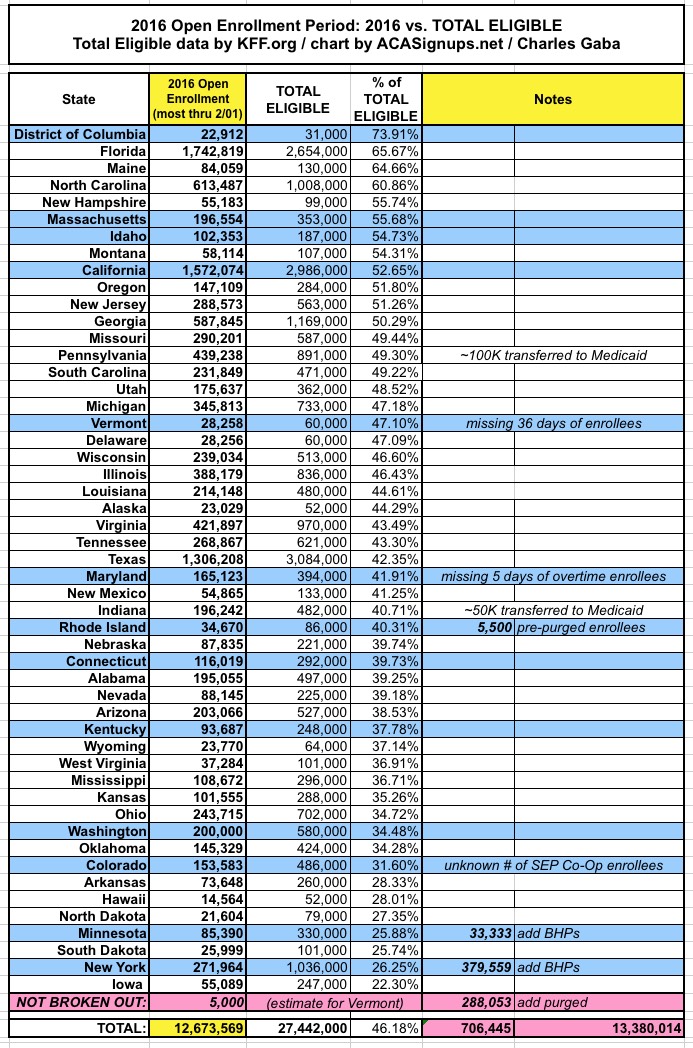 A slightly more optimistic "ceiling" projection would seem to be based on Florida specifically. They're at 65.6% of their threshold already; let's say they're able to push that up to 70% over the next few years. If so, and if every other state can be ramped up to the 70% level, that would bring the total national exchange ceiling up to around 19.1 million. Lop off 10% of that for non-payment/etc and you're at 17.2 million actively enrolled/effectuated. Even then, since the CBO number is based on average monthly enrollment for the full calendar year, the true number would be slighly lower still; call it perhaps 16 million at the outside.

The bottom line is that no matter how you slice it, the CBO's original 21 million+ projection doesn't seem to have ever been realistic; 16 million full-year effectuations appears to be the absolute cap unless there's a major restructuring of how the law is implemented or an expansion of subsidies/credits.