That's the net increase in the number of Americans who the HHS Dept. of the United States says have gained coverage (either via ACA exchange policies, Medicaid expansion or the ACA's provision requiring policies to allow young adults between 19 - 26 years old to say on their parents plans).

The official ASPE report breaks it out as follows:

The 17.7 million figure can be broken out roughly as follows:

I'll be honest...the "Sub26er" number gets a bit tricky for a number of reasons, partly because some policies already allowed them on their parent's plan prior to the ACA, and partly because of age changes over time (that is, someone who was 23-25 in 2010 obviously had turned older than 26 by 2013, thus was no longer allowed on their parent's plan and therefore had to be counted separately). However, the ASPE team appears to have already taken this into account in the report:

Coverage gains for young adults (ages 19 to 25) started in 2010 with the ACA’s provision enabling them to stay on their parents’ plans until age 26. From the 2010 baseline periods through the start of Open Enrollment in October 2013, the uninsured rate for young adults declined from 34.1 percent to 26.7 percent, which translates to 2.3 million more young adults with coverage.

In other words, about 2.3 million of those 6.1 million can be appropriately "counted" towards the net total number of people who've gained coverage.

They also break the numbers out in a bunch of other ways:

Of course, there are a half-dozen different reputable firms which track the uninsured rate regularly out there, and each uses different criteria for doing so. Some only count adults over 18; others don't include those over 65; some ask whether the participant is currently insured, others ask whether they've been uninsured at any point over the past year, and so on. Different methodologies and pool sizes can give different results.

That's why one of the most important parts of today's ASPE report can be found on Page 6, where they've mushed together six of the most respected tracking surveys to show the overall trendline:

There are a number of estimates of the uninsured rate that are reported regularly. To put these new ASPE estimates in context, we report trends in the rate of uninsured from four other regularly reported survey efforts together with the Gallup-Healthways WBI (see Figure 4). Despite differences in sample size, response rate, and question wording, estimates from these surveys—the Gallup-Healthways WBI, adjusted estimates from the Gallup-Healthways WBI, the National Health Interview Survey (NHIS), the Urban Institute’s Health Reform Monitoring Survey (HRMS), the RAND Health Reform Opinion Survey (RAND), and the Commonwealth Fund Affordable Care Act Tracking Survey (CMWF)—all suggest large reductions in uninsured rates associated with the October 2013-March 2014 and November 2014-February 2015 Open Enrollment Periods. (Because HRMS, RAND, and CMWF do not sample in all quarters, some of the data points shown for these surveys are interpolated.) The unadjusted estimates, including those from Gallup Healthways WBI, are simply raw rates of being uninsured. 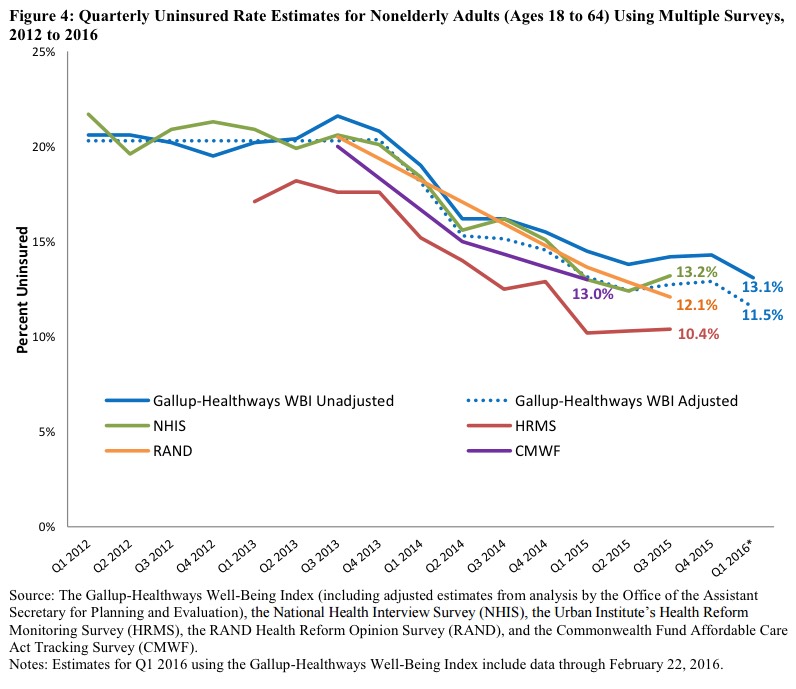 The bottom line is that any way you slice it, the ACA has dramatically reduced the ranks of the uninsured/uncovered over the past few years.

Yes, there are still serious issues with cost containment, carrier viability, premiums, deductibles, networks and so forth, and yes, there are still up to 30 million left to get covered...but this is still a pretty impressive accomplishment, and it's good to take a moment to recognize it.