OK, so what about a move to the Federal exchange? Well, assuming they follow Oregon, Nevada, New Mexico and Hawaii's lead and become a State-Based Marketplace using the Federal Platform (SBM-FP), the new fee structure would be:

Well...not quite. Remember that the carriers can (and in most cases, do) simply spread the fee out among everyone in the individual market (and corresponding small business market), on or off the exchange. If you don't believe me, take a look at these screen shots from Blue Cross Blue Shield here in Michigan (which pays a 3.5% fee since it's fully on the federal exchange): 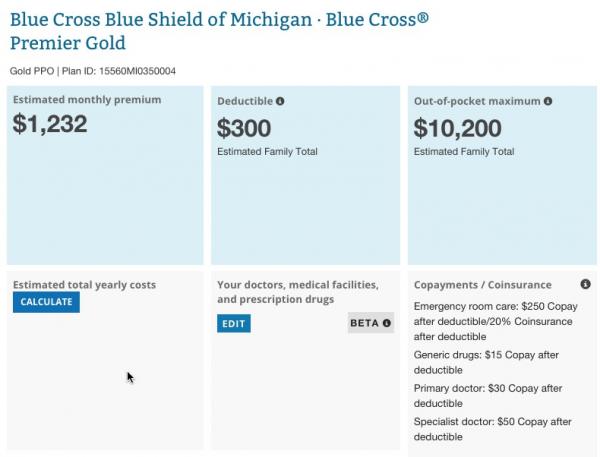 The first screen shot is from HealthCare.Gov. The second is directly from BCBSMI's website. Both are for the exact same policy, for the exact same family. Notice that the monthly premium is exactly the same even though one is on-exchange and the other off-exchange (the $0.25 difference is simply because HC.gov rounds off in their estimate tool). As Louise Norris pointed out, this is just like buying a policy through an insurance broker: You don't pay more to cover the broker's commission; the carrier simply spreads that commission out among all of their policies.

OK, so what's Kentucky's total individual and small business market consist of? Well, I believe the individual market was up to roughly 19 million nationally in 2015, roughly 20% larger than the 15.6 million from 2014 (which itself was a 47% increase from 2013). In Kentucky, that should mean roughly 190,000 people this year.

What about the ESI (employer sponsored insurance) market? Well, it should be something like 1.6 million (1.8 million minus the 190K individual market). How much of that is large group (which wouldn't be paying any fee any longer) vs. small group? According to Mark Farrah & Associates, around 16.7 million people had coverage through small group policies nationally in 2013. Let's assume this is up to perhaps 18 million nationally today; that's around 5.6% of the total population. In Kentucky, that would be roughly 250,000 people.

OK, so here's where things stand so far:

However, there's one more important factor here: The fees paid to HealthCare.Gov wouldn't be the only ones Kentucky would have to pay.

Remember, while HC.gov is taking care of the technical platform for Oregon, Nevada, New Mexico and Hawaii this year, they aren't handling other expenses such as the call centers, state-level marketing and so forth. That's still left up to the states. And guess what? In Oregon, at least, the cost for all of this is $9.66 per member per month without their own tech platform. Multiply that out by 102,000 Kentuckians and you'd get around $11.8 million per year...or nearly as much as the $13 million they're supposed to be saving from dropping kynect in the first place!

In fact, this is such an issue for Oregon that they're seriously considering moving OFF of HC.gov onto their own tech platform (again)...even AFTER their disastrous $300 million debacle two years ago...in order to (wait for it)...save money.

Now, don't get me wrong: I have no idea exactly what services are costing Oregon $15 million per year without their own exchange platform (they've enrolled around 133K people so far this year). It's entirely possible that Kentucky could run things more efficiently; instead of $11.8 million, perhaps they'd cut that in half to $6 million or so.

Still, $7 million is $7 million, right? Except for one more factor:

Kynect has an annual budget of about $28 million, funded by its 1 percent assessment on health premiums. The assessment would increase to 3.5 percent in a federal exchange, and dismantling Kynect would cost the state an estimated $23 million in one-time expenses, said Audrey Tayse Haynes, head of Kentucky's Cabinet for Health and Family Services.

Yup. Dropping the exchange and moving to the Mother Ship would cost $23 million all by itself...which means that even with a $7 million/year savings, it would take at least 3-4 years for the move to pay for itself (and by the way, that $23 million would be paid for by every Kentucky taxpayer, regardless of their coverage type). Not to mention the destruction/loss of an award-winning marketing campaign and the immeasurable goodwill that the kynect brand has built up over the past 2 years. Ask Apple, Google, Coca-Cola or Disney how much top-notch brand value can be worth.

One more thing: Instead of becoming a "SBM-FP", it's entirely possible that the KY exchange will be completely wiped out, and the state would revert to the same status as Texas, Florida, and over 30 other states which never set up their own exchange whatsoever. This is probably what Bevin has in mind, though I'm not sure what the legalities of it are.

If that happens, Kentucky wouldn't have to pay any of their own expenses; HC.gov would run the entire show. They would, however, have to pay a higher user fee: 3.5% instead of 3.0%.

The good news is that this would save the state residents around $10 million per year, and to be honest, even I can't deny that this is a compelling argument.

The bad news is that it would also mean that the state would be fully locked into the ACA, with virtually no local control over how the law operates:

This refers to the ACA's "Section 1332 Waiver" provision, which is what allows individual states to "break out" of the law and establish their own healthcare system...as long as it meets or exceeds the ACA's minimum standards of coverage, care and affordability. This is what Vermont was hoping to set up with their now-defunct Single Payer system, and it's also what Colorado is hoping to do next year with their SP initiative. The point is that the 1332 waivers give states the very flexibility that many keep hoping for to go their own way...and, ironically, by killing kynect, GOP Governor and Tea Party Fave Rave Matt Bevin would be forcing Kentucky to be joined at the hip with Obamacare permanently...including the branding and everything.

How's THAT for a plot twist??

UPDATE: Oh, there's also one more factor to consider. Obviously kynect employs Kentuckians, all of whose jobs will be lost assuming the exchange is indeed shut down. I haven't really said much about this before because I honestly had no idea how many people actually work for the exchange, but according to Brad Bowman of the Kentucky State Journal, kynect employs 34 full-time workers and 642 conttract workers (h/t Kentucky Voices for Health for the link). You can certainly argue that these jobs are "redundant", but the fact remains that a full exchange shutdown would mean that over 600 people (presumably most/all from Kentucky) would lose their jobs.