If it does manage to reach such lofty heights, people would be enrolling at a rate of 7 per second via HC.gov alone or 9 per second nationally for 24 hours straight.

Now, that doesn't mean that it'll hit that number; I may have overestimated significantly. Alternately, it's possible that there will be enough demand but that the server load will be too much and HC.gov will become sluggish or even crash. If that happens, obviously you can disregard these numbers.

If, however, this does come to pass, there could be over 7.3 million people actively signed up for January 2016 policies before most auto-renewals are even added into the mix, which would be a very good sign indeed.

While I don't have any specific evidence of the enrollment numbers at the moment, check out acting CMS director Andy Slavitt's Twitter feed today:

Like last year, we’re seeing a surge in consumer interest during these final days before the deadline.

Today, one day before December 15 deadline, we’re seeing unprecedented demand to @HealthCareGov. This is what I anticipated for tomorrow!

Still one more day go to the 12/15 deadline and demand today is higher than any day during the last Open Enrollment - even deadline days.

Site handling record traffic - due to high demand, some consumers may wait avg. < 2 mins to log-in to https://t.co/lnsDKCdAs4.

UPDATE: Yup, looks like at least some HC.gov visitors are being re-routed to the "Waiting Room" this evening: 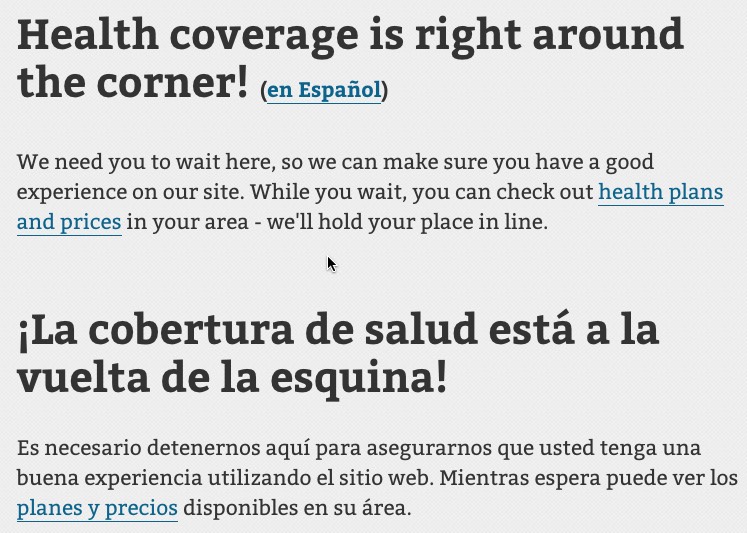 Unprecented demand yesterday - over 185,000 consumers were shopping for coverage at 9pm. #GetCovered

While demand was high yesterday, interest is even greater so far today. #GetCovered

No specific "concurrent shoppers" update this morning so far, but I'm guessing they'll break 200K at a time, assuming the server can handle the load.