I've already laid out, in exhaustive detail, my rationale for projecting that 14.7 million people will select qualified health plans (QHPs) via the various ACA exchanges during the 2016 Open Enrollment Period (11/1/15 - 1/31/16...possibly with another week tacked on in an "overtime" period).

As always, I could very well be dead wrong about this. For all I know, the HHS Dept's far more conservative target range (11.0 - 14.1 million) could prove to be correct, or it could surprise the hell out of everyone and come in closer to the Congressional Budget Office's estimate of 20 million (although that number actually reflects their projection of the average number of people enrolled year-wide, which would require more like 25 million to select a plan by the end of January.

So...fine; I'm pretty much right in between the CBO and the HHS. Let's assume that I'm correct about the national total...how does that break down state by state?

Before I continue, I want to make something very clear, because this caused a lot of confusion when I did this last year: Except where noted, these are NOT "official" projections from any state or exchange officials. As of this writing, I've only read of official enrollment targets for 2 states (California and Colorado). A third, Vermont, hasn't given any particular number but has simply noted that with the 2nd lowest uninsured rate in the country, they're "not expecting any big enrollment jumps":

They also include this note regarding their expected effectuation rate:

Effectuation Rate
The projection used the effectuation rates achieved in 2014 as the basis for subsequent years.

Hmmm...well, aside from the payment rate for the full 2014 calendar year turning out to be lower than CoveredCA had reported (repeatedly) during the first Open Enrollment period itself, let's see what this adds up to:

OK, so Covered California, the largest state-based exchange in the country, appears to be projecting somewhere around 1.8 million QHP selections during #OE3 itself. Fair enough. I know I'm calling the national total higher than HHS's high-end, but given how badly I got burned on California last year (I had them pegged at 1.9M, their actual was only 1.41M), I'm gonna play it more cautiously this year and stay with their mid-range. 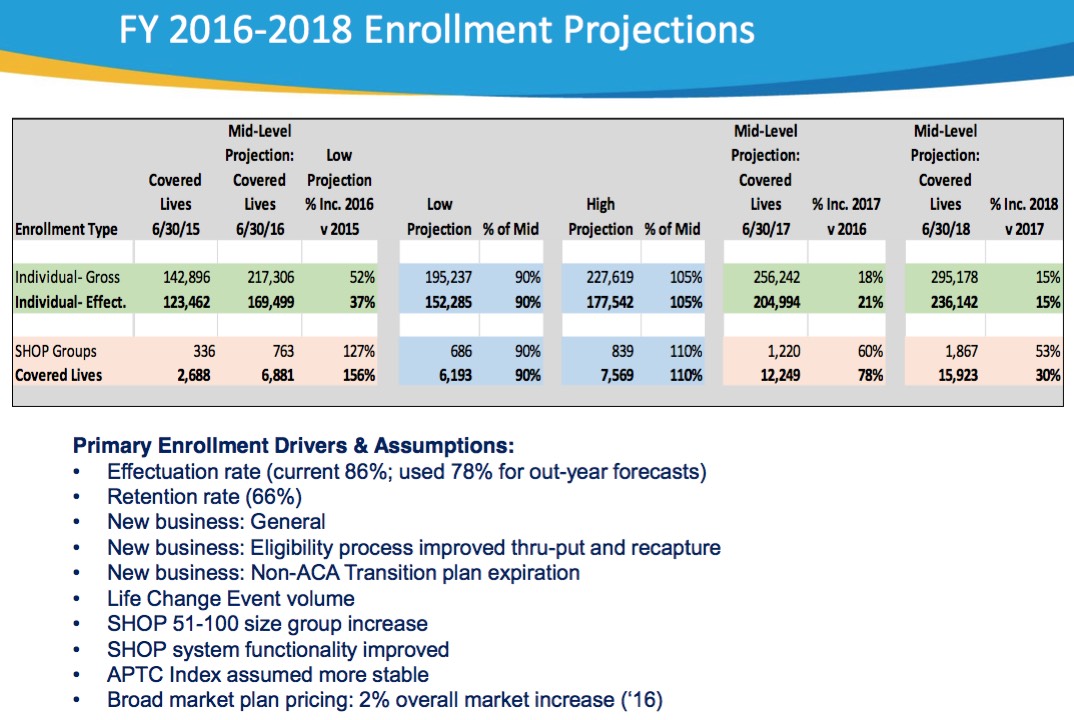 Assuming Colorado has a similar ratio next year, and 8.3% of that 217.3K comes in after #OE3 ends, that should mean roughly 18,000 of them...which would mean around 200,000 QHP selections during Open Enrollment.

HOWEVER, given the extra uncertainty from last week's Colorado HealthOP closure (sending 80,000 enrollees out to find other coverage), I'm gonna play it a bit cautiously and knock 10K off my total, bringing it to 190,000.

Vermont signed up just 31,619 people during OE2, which was actually fewer than the 38,048 they nabbed in 2014 (only one other state, Washington, managed to lose gross QHP selections year over year). This year I'm gonna take them at their word and split the difference at an even 35,000.

In terms of official projections (or even my own extrapolations from official projections), that's really it; several other state exchanges have informed me that they either have no plans for issuing targets publicly, or just haven't done so as of yet.

For the other 47 states (+DC), I'm using a combination of several factors to come up with my own estimates.

For most of the states, I'm using the state-level data from:

In addition to this, I made some tweaks of my own, based on my limited knowledge/educated guesses about things like:

As the third enrollment period for Obamacare nears, Health and Human Services officials are discussing some of their plans to expand enrollment for uninsured populations in five areas – Dallas, Houston, Chicago, Miami, and northern New Jersey. The New York Times reported that HHS Secretary Sylvia Burwell during a speech at Howard University Hospital in Washington, DC said this enrollment period would target the 10.5 million Americans uninsured and eligible through the Obamacare marketplaces. Burwell said the five areas being targeted in the new enrollment period represent those where many uninsured reside.

OK, so that's Texas (x2!), Illinois, Florida and New Jersey. I've also read elsewhere that Atlanta is going to be targeted hard, so add Georgia to the list.

UPDATE 10/20/15: I've been informed by the Maryland Health Benefit Exchange that they're projecting 150,000 people to be enrolled by the end of the 2016 Open Enrollment Period. On the one hand, this is about 8% lower than my original ballpark estimate of 163,000. They've also confirmed that they're defining "enrolled" in this case as "plans selected/checked out", not necessarily "effectuated", so it's an apple-to-apples comparison. 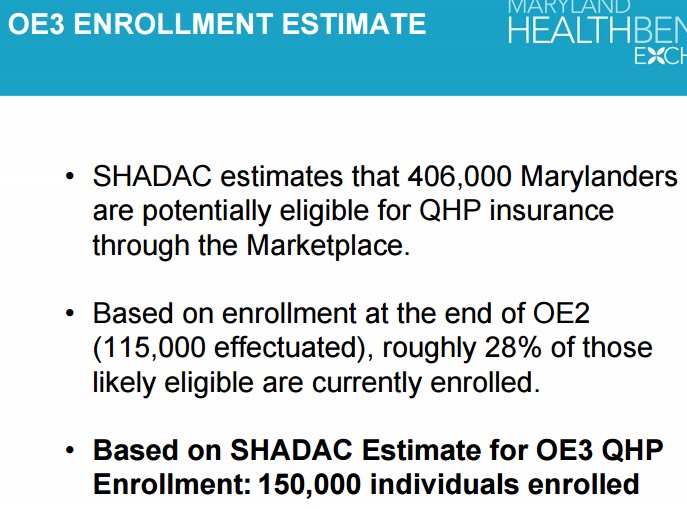 At the same time, I forgot that Maine is one of only two states looking at virtually flat year-over-year premium changes and is likely to see more of a bump accordingly. Therefore, I've shifted the 13K difference from Maryland up a spot to it's neighbor to the north (Indiana is also looking at flat rates, but Jed Lewis has reason to believe that the deductible increases there will still dampen Hoosier signups, so I'm keeping IN where it is.

UPDATE 10/20/15: I've also hunted down the Idaho exchange's official projection for #OE3...however, I'm awaiting clarification about what it actually means. According to Your Health Idaho's Sept. 18, 2015 board meeting minutes:

Rep. Rusche asked what our target enrollment is for this cycle and what barriers we see in making those targets. Mr. Kelly said the team is focused on the 80% goal of 92,000 as our enrollment target. Premium increases are a potential barrier. Net premium is a relatively small increase for most consumers, and each consumer will experience something different depending Page 5 of 14 on their plan, their location, their carrier, etc. We feel that while the premiums are increasing the relatively small net premium increase will mitigate this barrier to a large degree.

92,000 people would actually be about 5% lower than their 2015 QHP selection number (97,097). However, I contacted the exchange directly and was informed that:

I'm not sure what the "80% goal" refers to; it could mean that they're assuming a 20% attrition/non-payment rate, which would make their actual QHP selection target more like 115K (5K higher than my call). Assuming a standard 10% non-payment rate, however, that would mean roughly 102K selections. Either way, my 110K seems to be right on the money.

UPDATE 10/20/15: I've also found the Connecticut exchange's official projection, but again, I'm not sure whether this refers to their QHP selection or effectuated total:

As with Idaho, if they're talking about selections, 105K - 115K would be dead even with 2015's 109,839...and wouldn't bode well for enrollment growth nationally in 2016 (as the HHS Dept. has already warned). However, if they're referring to effectuated enrollments only, then assuming a 10% non-payment rate, they could be talking about a range of 116K - 127K, which would be dead even with my projection.

UPDATE 10/22/15: I've heard back from the Minnesota exchange (MNsure); they have a calendar-year target of 83,000 QHP enrollees, but agree that the "vast majority" are expected from Open Enrollment. This lines up almost perfectly with my own estimate of 80,000 #OE3 enrollees, so I'm leaving that one as is.

I will be making revisions like these to these projections, as appropriate, between now and November 1st, based on new evidence that comes in. If another CO-OP collapse is announced later in the next 10 days, or another exchange announces their official projection, I'll modify that state's estimate accordingly.

UPDATE 10/31/15: (sigh again) OK, two more CO-OPs have shut down in Arizona and Utah. However, I was already assuming only about 10% increases in both states to begin with, so this doesn't really change anything for my projections.

ONCE OPEN ENROLLMENT ACTUALLY BEGINS, while I'll obviously change my estimates for various states based on new evidence, the table below will be "locked down" so I can compare how I did versus the actual results. The odds are that I'll be dead on target for some, way over for some and way under for (hopefully a lot of) the rest.

Take all of the above, blend it all together, cross your fingers and here's what I've come up with: 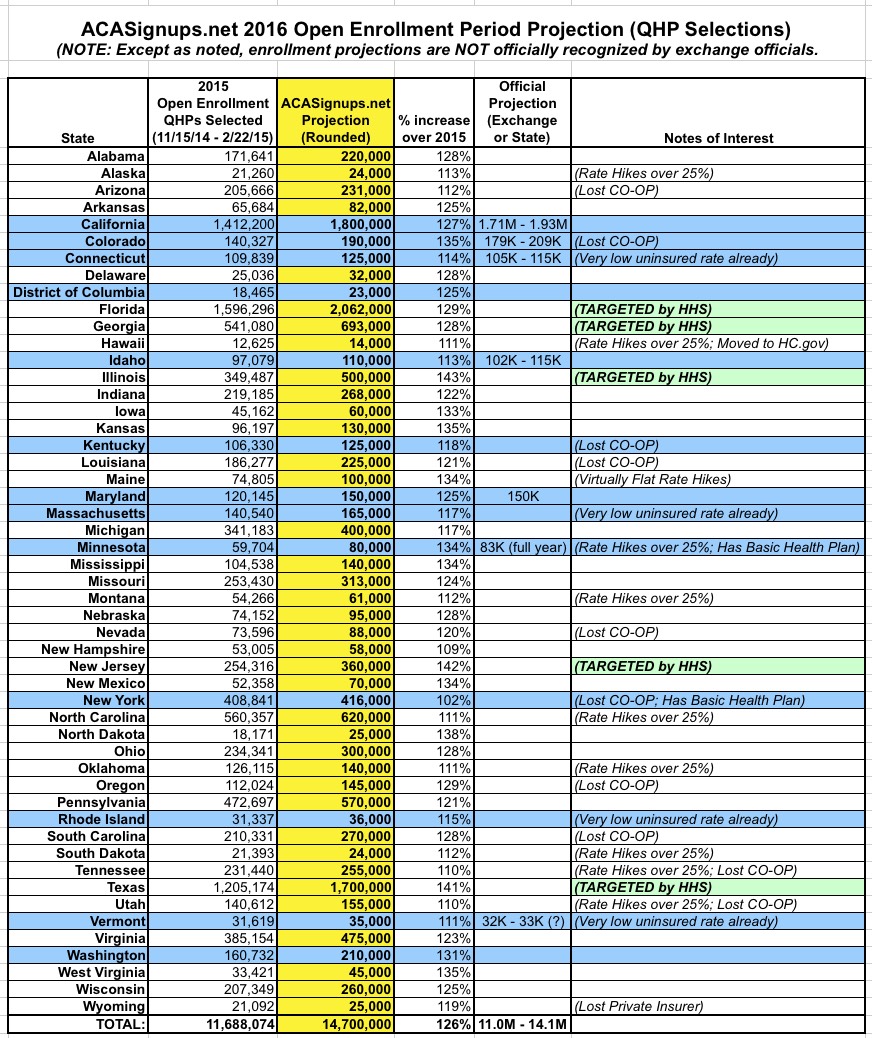