After the first Republican debate, I wrote a piece over at healthinsurance.org which noted that the Big Obamacare Story® to come out of it...is that there was no Obamacare Story at all. The same held true for the second GOP debate a few weeks later.

Surely, however, the first Democratic debate would be heavy on the Ocare, right?

Guess again. I was gonna do another writeup about all of this Nothing, but Jeffrey Young of the Huffington Post already has:

President Barack Obama's landmark health care reform law -- one of the most contentious political issues of the past six years -- received all but no attention during the Democratic debate Tuesday tonight. But considering that all five Democrats on the stage were supporters of the Affordable Care Act, perhaps it's not surprising that CNN opted to raise issues more likely to provoke confrontation.

Aside from general agreement that universal healthcare should be the eventual goal, there was really only one ACA-related question: Whether the candidates support allowing undocumented immigrants to buy into the exchanges:

The only thing I'll add here is that Clinton's seeming half-agreement that undocumented immigrants should be allowed to enroll in the exchanges but not to receive the federal tax credit subsidies if they qualify financially is a bit disingenous, since the only practical reason to enroll through the ACA exchanges for most people (as opposed to signing up directly through the insurance carrier itself) are the tax credits.

In other words, if you make over 400% FPL you wouldn't receive those credits anyway (regardless of legal residency status), and if you make less than that, why would you bother visiting HealthCare.Gov (or one of the state exchanges) if you still had to pay full price? Either way you'd probably be better off going directly through the carrier anyway.

Aside from that, the other interesting tidbit from Young's piece is that apparently I missed the release of Gallup's 2015 3rd Quarter Uninsured Rate survey last week. This is the first quarter since the ACA Exchanges and Medicaid Expansion launched 2 years ago that Gallup has found the uninsured rate to increase (if only slightly), from 11.4% to 11.6%. However, even this isn't too unexpected: Last year, the rate held steady at 13.4% for the 2nd and 3rd quarters, since things are pretty stable during the off-season. This year, with Medicaid expansion pertty much tapped out, the uninsured rate was almost certain to remain flat at best between Q2 and Q3; it inching back up could simply be noise in the survey's margin of error. It should be back on the decline again starting soon, as 2016 Open Enrollment ramps up.

In the meantime, though, here's where Gallup has things at: 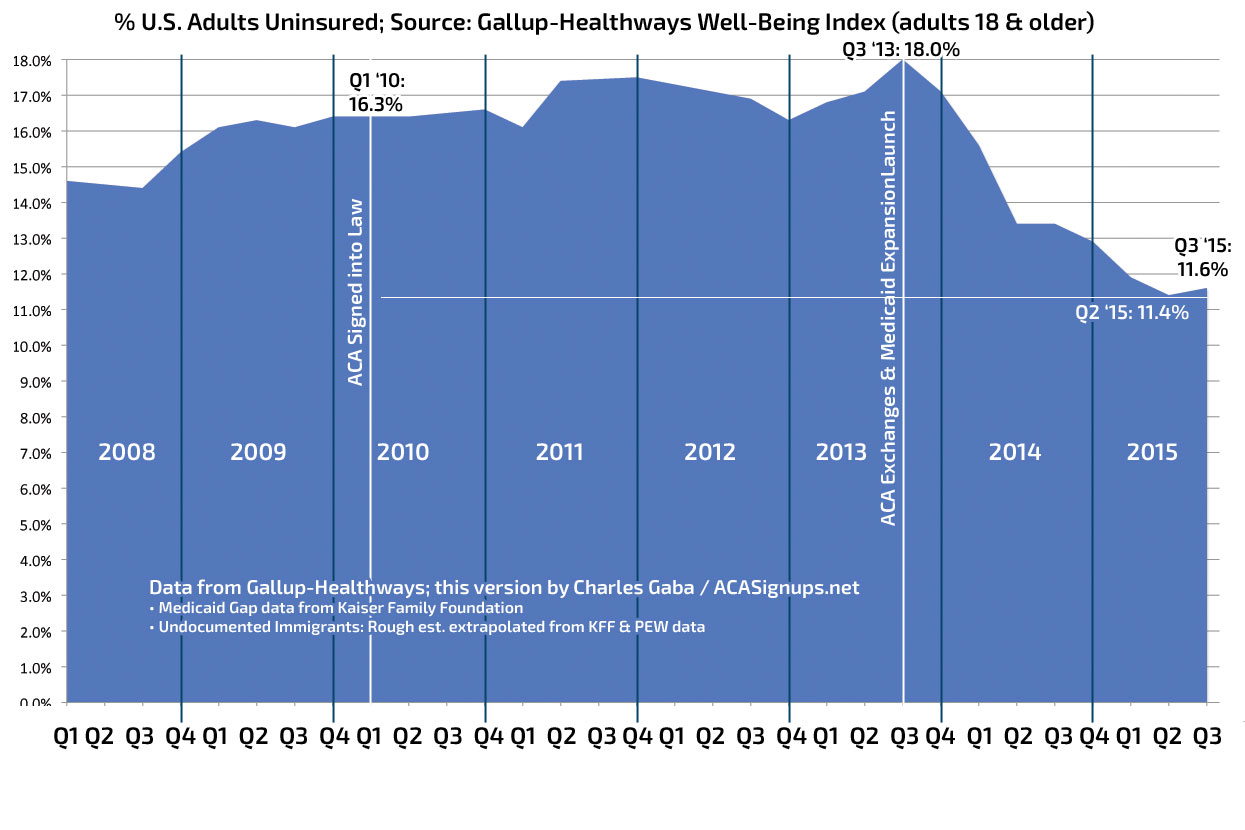