I planned on posting about this earlier today, but had to deal with a crisis for one of my Day Job clients (yes, I still have one believe it or not).

Early this afternoon, Covered California, the largest state-based ACA exchange in the country, held a conference call accompanied with a lengthy press release and a very nice slideshow full of pie charts and data points, giving a comprehensive overview of where things stand in the Golden State.

Many of their key points aren't really news to me; I knew, for instance, that they still had about 1.3 million people actively enrolled in private policies via the exchange as of the end of June, of whom about 90% are receiving APTC and/or CSR financial assistance. I also knew that they've been averaging at least 1,100 new enrollees per day being added during the off-season (it's been around 9,500/day nationally, and CA makes up around 12% of total enrollments). And the part about the vast majority of those who leave ACA exchange coverage moving on to other types of coverage is something which I've pointed out repeatedly for the past 2 years (yes, it's common senses but you won't believe how many Republicans have tried to treat the attrition rate as some sort of attack point).

However, today's release includes a whole bunch of other useful info which data/health wonks should have a field day with, so let's get to it (both documents are at the bottom of this entry)!

SACRAMENTO, Calif. — As Covered California gears up for its renewal and open- enrollment periods, the exchange announced that it has served more than 2 million consumers since it began offering health care coverage in January 2014. The milestone occurred as Covered California released its first-ever comprehensive report on its consumers.

As I said, this should be pretty obvious, but it's still good to have some hard numbers. CoveredCA even includes a full breakdown of just what happened to those who dropped their CoveredCA-purchased policies. Here's the stats on the 2015 numbers only... 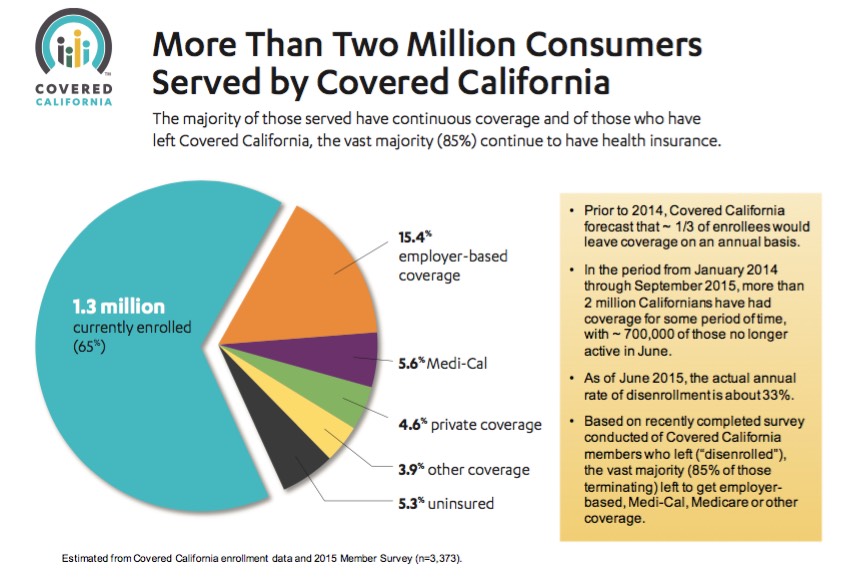 Lee noted that this is the nature of every individual health insurance market. Consumers come and go depending on their needs and circumstances.

“While the majority of consumers stay with Covered California, the good news is that most of those who move on enroll in another source of coverage and remain insured,” Lee said.

Well whaddya know? Some people turned 65 and moved to Medicare. Some fell on hard times and moved to Medicaid (aka Medi-Cal). Some may have moved, gotten married, gotten divorced or whatever and decided that an off-exchange policy made more sense for them. Some were young adults who turned 26 and moved onto their own non-CoveredCA plan. The largest portion, however, were hired by a company offering full insurance benefits.

NOTE TO REPUBLICANS: THIS IS A GOOD THING. IT MEANS THE ECONOMY IS IMPROVING.

Assuming that California is representative nationally, this suggests that out of the roughly 16.4 million people (around 9.6 million in 2014 and an additional 6.8 million thru 6/30 in 2015) who have selected private policies via the various ACA exchanges since October 2013, perhaps 870,000 are back to being uninsured now...but that's still 15.5 million who have full coverage of one sort or another. Not bad at all.

Next up are some hard stats:

The 1.31 million figure is slightly lower than the 1.39 million stated by CMS as of 6/30, but it's still pretty close. The 654K figure refers to those receiving Cost Sharing Reductions on deductibles, co-pays and so forth via Silver plans. This, too, is a bit lower than the 715K in the June CMS report. I assume slight clerical methodology differences account for this, since all numbers are as of June 30th.

Covered California also released data on the ethnicity of its enrollment population, which illustrates the positive enrollment trends seen over the last 18 months. While Covered California is increasingly improving its enrollment to better reflect the diversity of subsidy-eligible Californians, this improvement will take time to be fully reflected in active membership, which accounts for all the consumers enrolled since January 2014.

“The data released today show why changing to a culture of coverage is a long-term proposition,” Lee said. “The improvements we have made with partners across California to enroll our diverse state are bearing fruit, and we need to build on the good work we have done.”

Lee said Covered California will continue to focus on reaching the state’s diverse population and enrolling consumers in all communities during its upcoming open- enrollment period.

Supporting graphics related to this press release and the “Covered California Active Member Profile” are posted online at: http://hbex.coveredca.com/data- research/library/Active-Membership-Slides.pdf.

A link to the complete “Covered California Active Member Profile” can be found here: http://hbex.coveredca.com/data-research.

They also emphasized the important point I made the other day...

“Covered California consumers will benefit from an increased choice of plans and have access to more providers in 2016,” Lee said. “This new era of health care is working in California and around the country.”

Consumers can log into their Covered California online accounts to update their personal information, provide consent to verify their income, review their options and shop around if they are looking for a plan that better suits their needs. Consumers who do not take action by Dec. 15 will be automatically renewed into their existing plan.

In addition, they made another plug for shopping around...

“If you’re happy with your plan, and you want to maintain the level of coverage that you’ve enjoyed in 2015, you don’t have to do anything,” Lee said. “In addition, we know that about 20 percent of consumers who choose to keep their current plan will see a decrease in their premiums. However, some consumers may be able to save money and keep the same level of coverage if they shop around.”

Earlier this year, Covered California announced that thanks to its aggressive negotiating with health plans, the average rate increase was only 4 percent, and many consumers may be able to limit any premium increase, or reduce their current payments, by shopping around and switching to the lowest-cost plan in their same metal tier.

Finally, the press release makes note of the improvements/service expansion this year:

Consumers renewing their coverage for 2016 will have more health plans to choose from and access to more providers. Covered California previously announced that two health insurance companies, Oscar Health Plan of California and UnitedHealthcare Benefits Plan of California, will be offering products on the exchange. In addition, Blue Shield of California, Health Net and Molina Healthcare will be expanding to serve new areas. As a result, every Covered California consumer will have at least two plans to choose from, and 99.6 percent of consumers will have at least three options.

“We have also increased the number of services that are no longer subject to a deductible,” Lee said. “This will make it easier for consumers to see their doctor and get the right care at the right time.”

For consumers who are currently uninsured, Covered California’s open-enrollment period resumes on Nov. 1 and continues through Jan. 31, 2016. Right now consumers can find out if they qualify for financial help, compare the various plans available in their area and get a preliminary estimate of costs by using Covered California’s Shop and Compare Tool (at www.CoveredCA.com/shopandcompare/#calculator).

Individuals who have health coverage through Medi-Cal renew their coverage throughout the year, on a rolling monthly schedule. Medi-Cal will contact them directly if they need to take action. Unless they are contacted by Medi-Cal, these individuals do not need to go to the Covered California website to renew or apply.

All in all, this is great news for California. Assuming Healthcare.Gov and the other state-based exchanges are going to have similar improvements this time around, 2016 Open Enrollment should go pretty well.