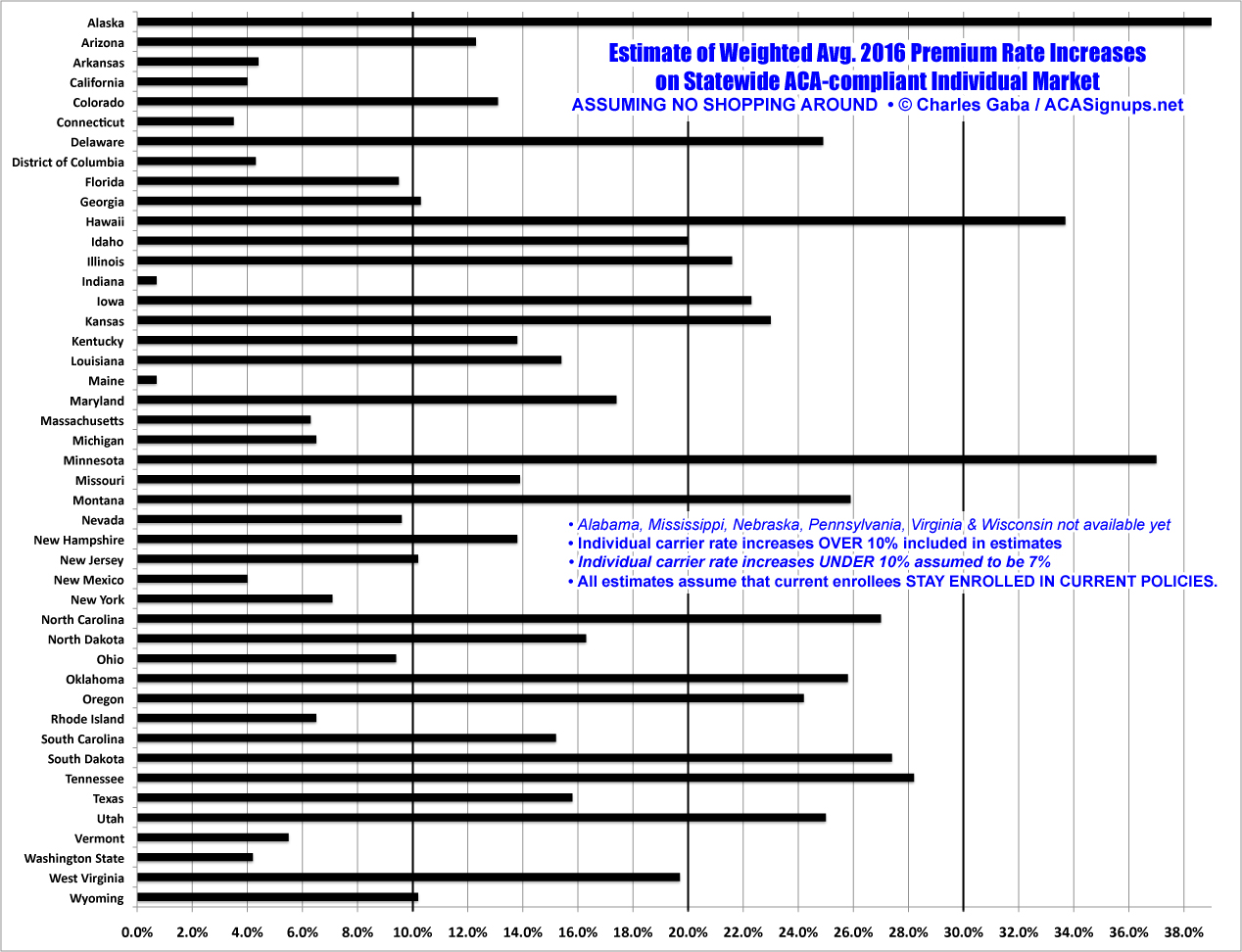 Obviously the rates are all over the map here, with no clear pattern. However, when we sort the states by different criteria, some trends do start to emerge.

First up: Medicaid expansion. The assumption here is that, all else being equal, states which have expanded Medicaid under the Affordable Care Act would presumably also see lower average rate hikes than those which haven't. Let's take a look (click image for higher-res version): 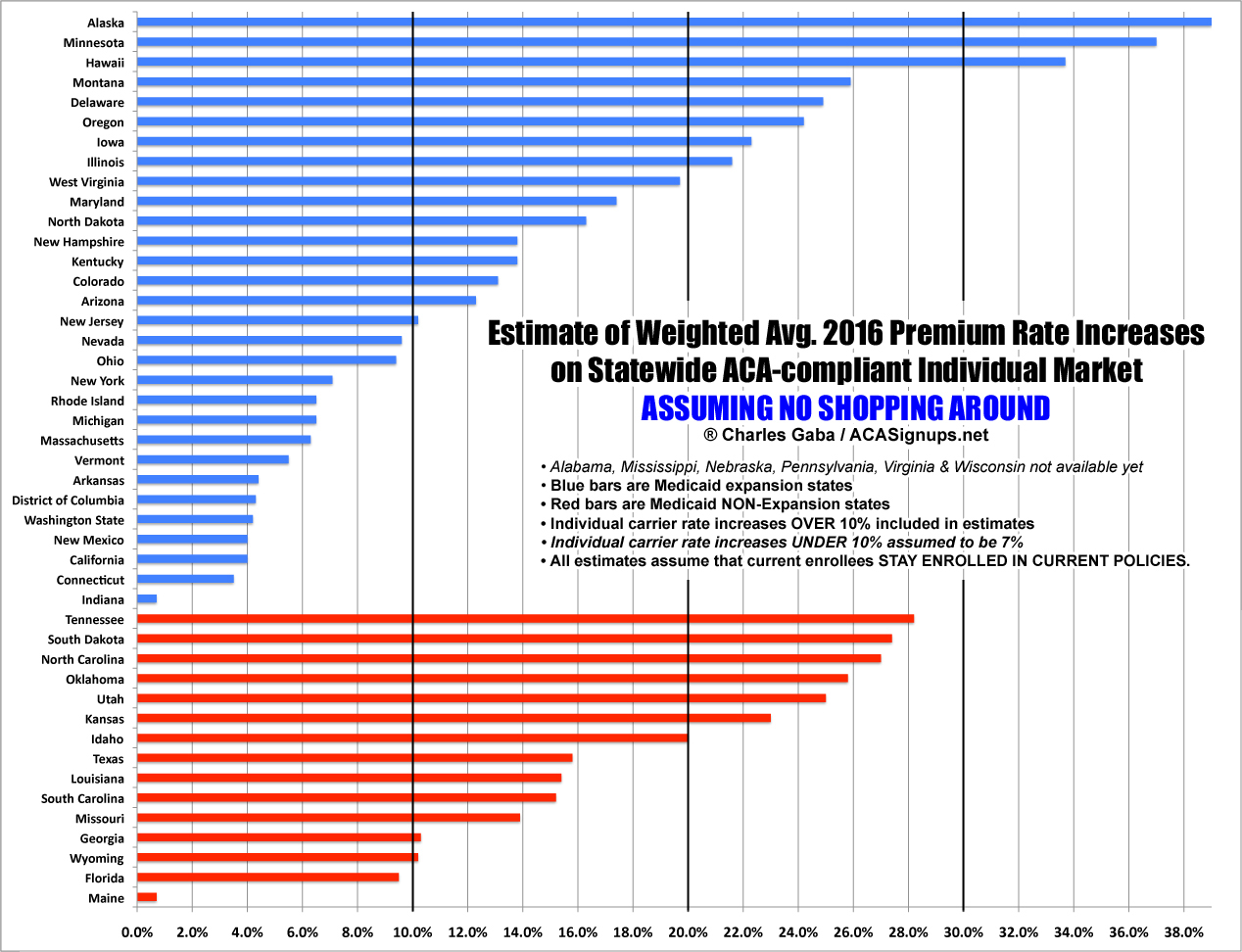 Hmmm...at first glance, the opposite appears to be the case here: The 3 highest average hikes are all in Medicaid expansion states (Alaska, Minnesota & Hawaii). However, the lowest average hikes are also found in the expansion states (aside from Maine, the non-expansion states are all 9% or higher). In addition, Alaska is an outlier since they just expanded Medicaid (and even that was barely forced through by the governor, is still facing a lawsuit from the state legislature and hasn't actually been implemented as of this writing anyway). I should note that 5 of the 6 missing states have not expanded Medicaid; Pennsylvania is the sole exception. My conclusion? There's no clear rate hike pattern based on whether the state expanded Medicaid or not.

Next, let's move from actual Medicaid expansion to the more general "Red/Blue" ideological divide. This is much more subjective; not every state is clearly in one camp or the other.

For instance, Michigan is currently completely run by Republicans at the state level (Governor, State House, State Senate, State Supreme Court, Attorney General, Secretary of State). However, there are hundreds of thousands more Democrats in the state than Republicans, both U.S. Senators have been Democrats for decades and the state has voted for the Democrat in the past 6 Presidential elections in a row. In addition, in 2014, Democrats received more votes than Republicans in the 14 U.S. Congressional races, the state House races and the state Senate races...yet, Republicans still came out ahead due to horrific gerrymandering. My ruling: Michigan is still a "Blue" state.

By contrast, even though registered Democrats also massively outnumber registered Republicans in Kentucky (53% to 39%) and the state currently has a Democratic Governor and Democratic-controlled state House, no one in their right mind would define KY as a "blue" state. The Democrats tend to vote Republican for whatever reason, and they haven't voted for a Democratic Presidential contender since 1996. My ruling: Kenucky is a "Red" state. Similar arbitrary categorizations may hold for some other states. 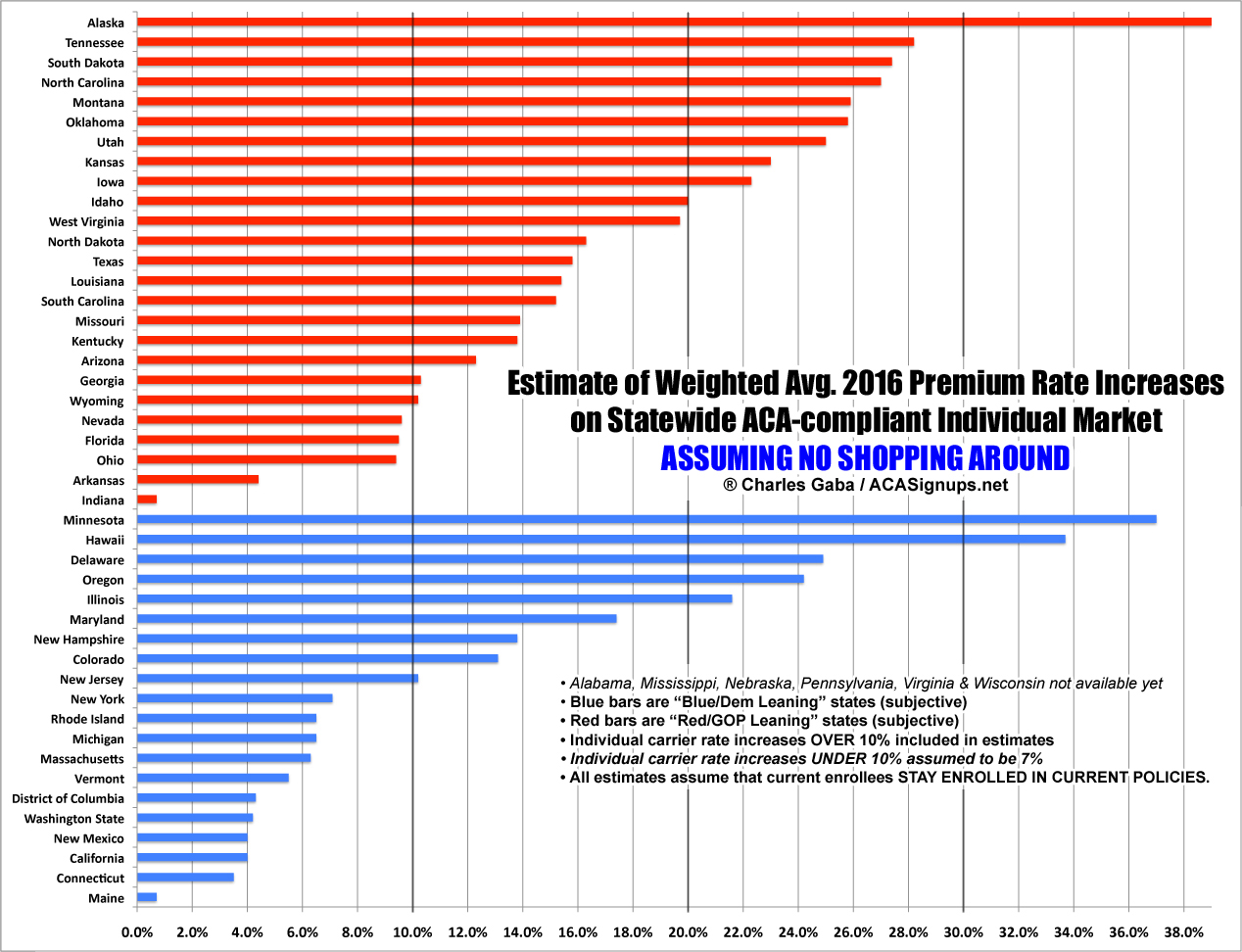 I should note that of the 6 missing states, 3 of them are solidly "red" (Alabama, Mississippi, Nebraska). The other three (Pennsylvania, Virginia and Wisconsin) are harder to categorize, but I'd probably put all 3 in the "blue" category overall.

Finally, let's look at the one clear pattern which has emerged so far: Approved rates vs. Requested rates (click for higher res version): 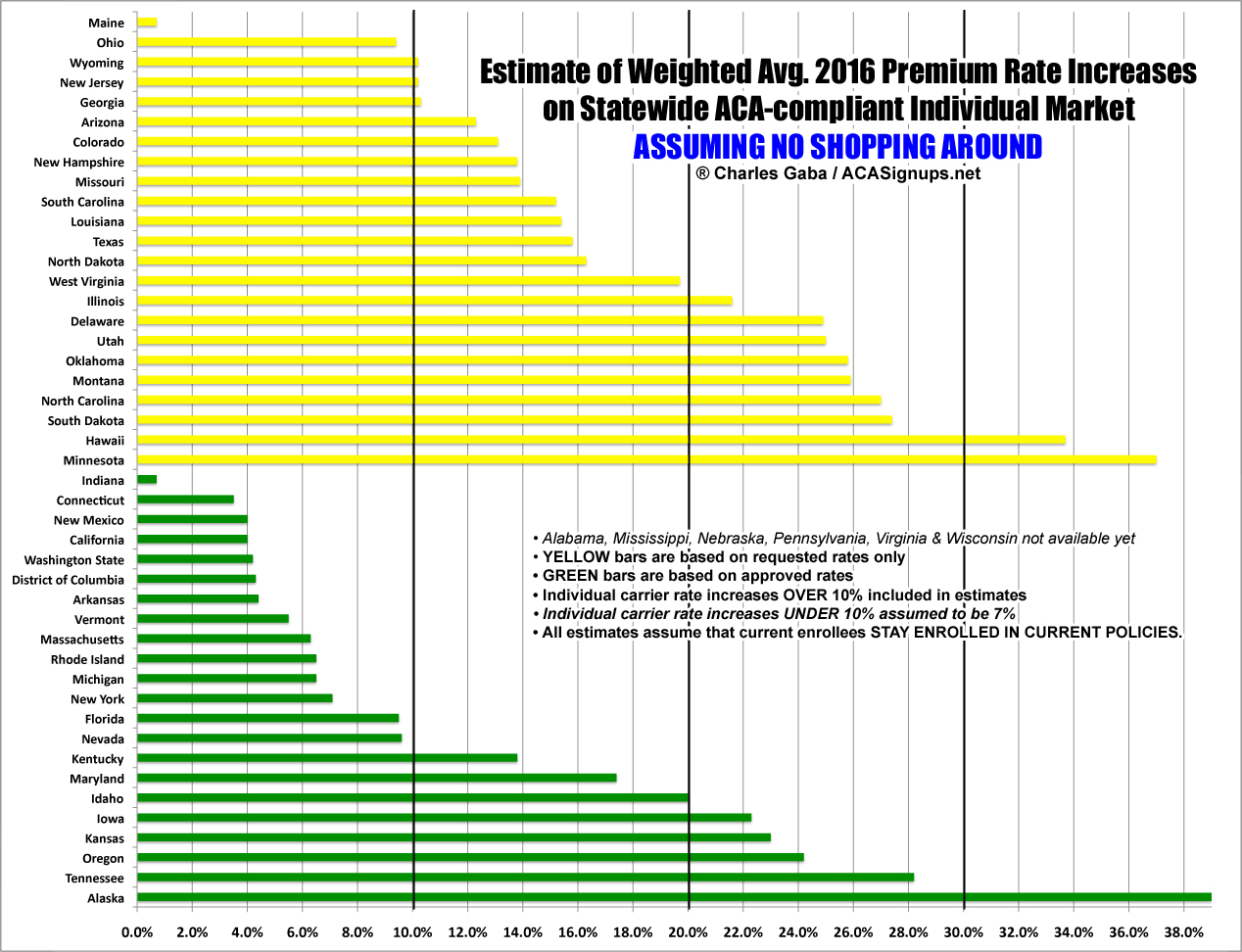 Again, I'd really need to include the 6 missing states to have a full picture, but this one seems pretty clear to me. Of the 23 states which haven't had their 2016 rate changes approved, only 2 of them (Maine and Ohio) are below 10%, and 9 states have requested average hikes exceeding 20%. Meanwhile, of the 22 states which have issued approved rate changes, 14 of them are under 10% and only 5 are higher than 20%.

The obvious takeaway here is that state regulators (at least in states which allow them the power to authorize rate changes) are tremendously important in keeping insurance rates from spiraling out of control. Let's just hope that the regulators in the "requested only" states take their jobs seriously.

UPDATE: Professional actuary Rebecca Stob requested that I break the states out a fourth way: By states which are allowing "transitional" or "grandmothered" policies to be continued into next year vs. those which aren't. There are 3 states (Colorado, Illinois and Oregon) which did allow "transitional" plans...but only through 2015.

Here's what it looks like when you break the states out this way: 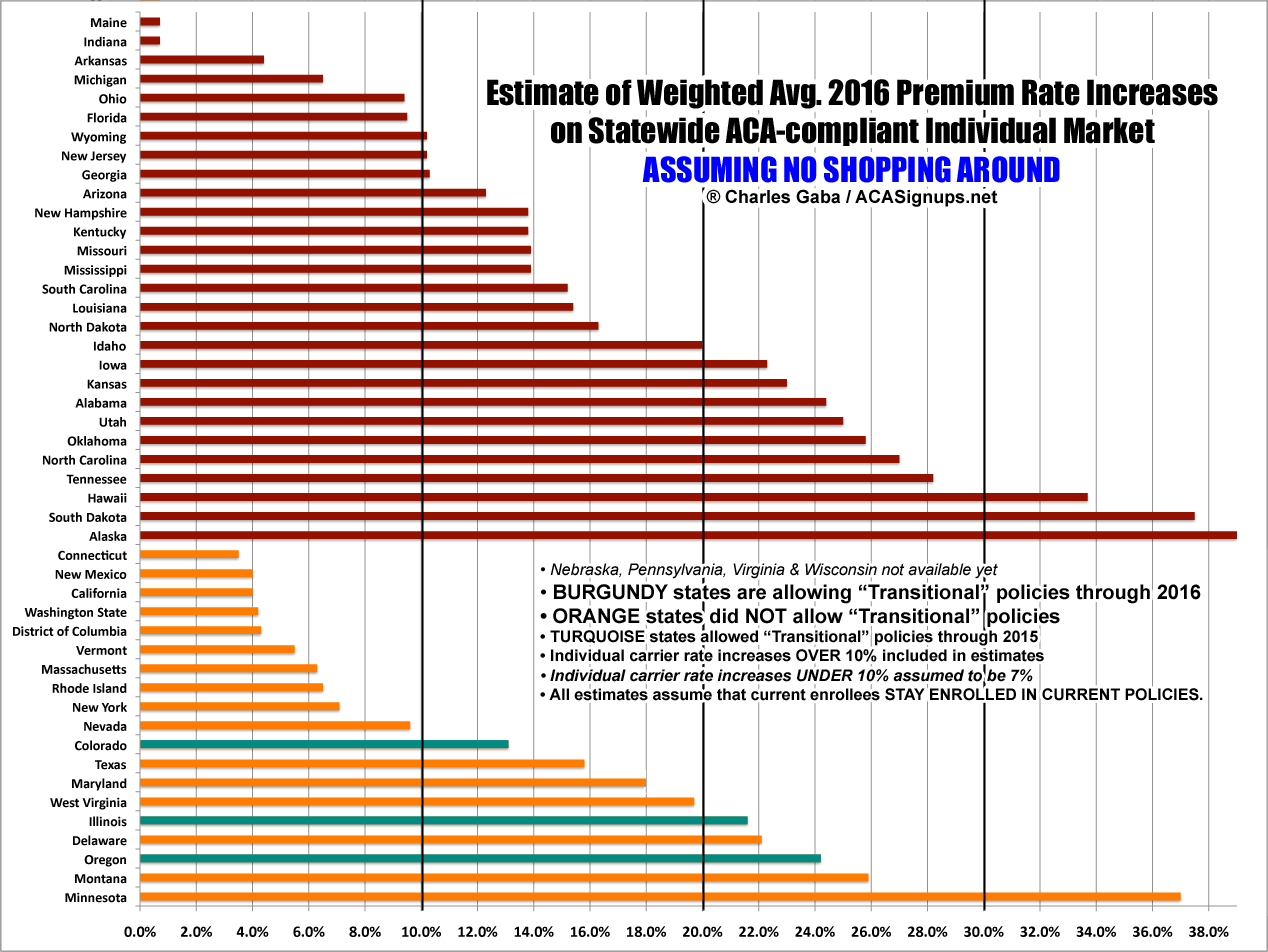 Overall, the states which didn't allow transitional policies do appear to be looking at lower rate increases than those which did, which is what you'd normally expect. This is even more true if you move the 3 turquoise states (CO, IL, OR) over to the "transitional" section.

So yes, there does appear to be a pattern here, if not quite as strong as the "approved/requested" chart: The states which are not allowing transitional plans next year do indeed seem to have lower hikes than those which are allowing them.