It's been awhile since I've crunched the numbers for a new state. As I noted a week ago, I've covered 42 states representing 87% of the total population, so any further changes assuming 100% of current enrollees stay with their current policy are likely to be fairly nominal unless various insurance regulators surprise me and slash the approved rate hikes significantly in a few states.

Thankfully, Louise Norris has picked up the ball and seems to be filling in some of the missing pieces using my own methodology, including North Dakota and South Carolina. I'll tackle the Palmetto State first:

Rates have not yet been approved for 2016, but Healthcare.gov’s rate review tool shows proposed rates from carriers that have requested rate increases of ten percent or more.  In South Carolina, that applies to two current exchange carriers:

...The remaining two carriers in the South Carolina exchange – BlueChoice Health Plan and BlueCross BlueShield of South Carolina – have both requested rate increases of less than 10 percent for 2016.  For 2015, both of those carriers had rate decreases.

But UnitedHealthcare will be joining the South Carolina exchange for 2016; their products had previously only been available outside the exchange.  So the number of carriers in the exchange should remain steady, at five.  UnitedHealthcare began offering off-exchange individual plans in South Carolina in 2015, and they had 4,109 enrollees (all off-exchange) as of when they filed 2016 rates in the spring of 2015.  They have proposed an average rate increase of 19.6 percent on those plans for 2016, although rates have not yet been finalized.

...It’s a reasonably safe bet to say that the ACA-compliant individual market in South Carolina stands at around 201,000 people (that figure is from 2014, but as ACAsignups’ Charles Gaba points out, it included grandmothered/grandfathered plans, and the increase in the individual market this year likely cancels out those numbers).  We do know that total on-exchange effectuated enrollment stood at 165,276 people as of June, and it’s reasonable to say that another 45,000 people have ACA-compliant plans outside the exchange (a total of nine carriers sell plans in the individual market in SC, four of which only offer plans outside the exchange).  For now, we’ve got the following proposed rate increases and market share:

Louise comes up with a worst-case scenario of around 16.8%, and she could very well be correct. I'm using slightly different numbers (I estimate roughly 207,000 ACA-compliant enrollees both on/off the exchange), giving a worst-case scenario of 16.6%...but I also tend to be a bit of an optimist, so have been using the "mid-range" average rate hike for "unknown" companies below the 10% hike threshold.

This gives an estimated, state-wide weighted average rate increase of 15.2%: 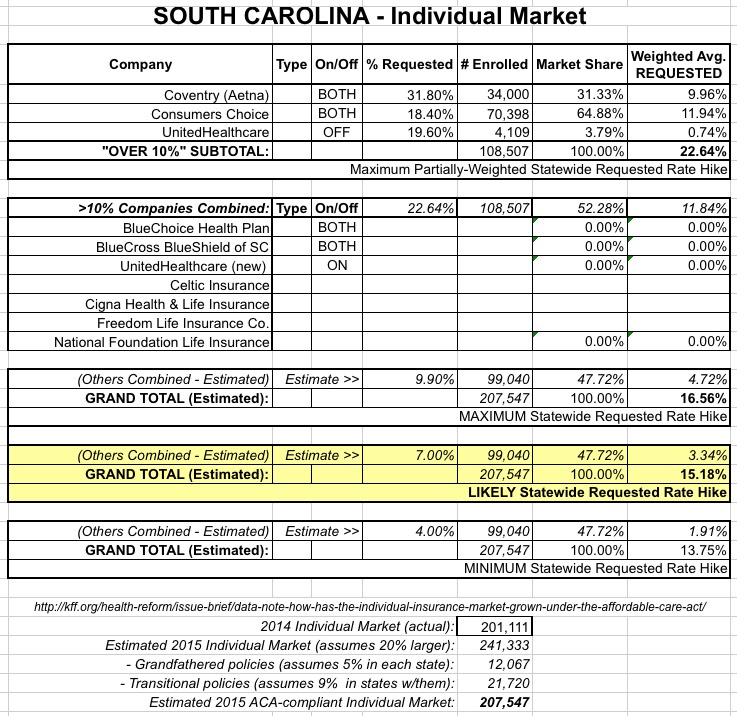