In which I was dead-on target AND way off at the same time: 9.95 million *effectuated* exchange enrollees as of 6/30

For months now, I've been operating on the assumption that the total number of currently effectuated private ACA exchange policies has been roughly 10.3 - 10.4 million, give or take. This was based on a combination of last year's enrollment pattern, the 214,000 additional people who selected QHPs during the #ACATaxTime special enrollment period, as well as assorted state-level enrollment updates out of California, Maryland and a few other state-based marketplaces.

On June 30, 2015, about 9.9 million consumers had effectuated Health Insurance Marketplace coverage – which means those individuals paid their premiums and had an active policy at the end of June.1 These numbers are consistent with HHS’s effectuated enrollment target of 9.1 million for the end of 2015.

Of the approximately 9.9 million consumers nationwide with effectuated Marketplace enrollments at the end of June 2015, about 84 percent, or more than 8.3 million consumers, were receiving an advanced premium tax credit (APTC) to make their premiums more affordable throughout the year. The average APTC for those enrollees who qualified for the financial assistance was $270 per month.2

Now, I'm still looking into whether there was a "mass cancellation" due to enrollees failing to provide proof of legal residence, as has happened twice before (112,000 were dropped for this reason last September, and another 90,000 were dropped for legal residency issues this past February). This could account for a significant portion of the drop.

UPDATE: OK, thanks to Larry Levitt for calling my attention to this...sure enough, towards the end of the press release:

During the time period from April 1, 2015 to June 30, 2015, enrollment in coverage through the Federally-facilitated Marketplaces was terminated for about 306,000 consumers with citizenship or immigration status data matching issues who failed to produce sufficient documentation of their citizenship or immigration status. In addition, during the same time period, about 734,000 households with annual household income inconsistencies had their APTC and/or CSRs for 2015 coverage adjusted.

Overall, as of June 30, 2015 the Marketplace has ended 2015 coverage for approximately 423,000 consumers with 2015 coverage who failed to produce sufficient documentation on their citizenship or immigration status and has adjusted APTC and/or CSRs for about 967,000 households.

423,000 enrollees. 90K of those were already accounted for in February, another 27K in March...plus another 306K between April and June via Healthcare.Gov.

Put another way, without subtracting the legal residency issues, I was off by somewhere between 0.2% - 1.1%.

Either way, what does this do to The Graph? Well, here's what I had it estimated at, followed by what it actually turned out to be (click both for high-res versions: 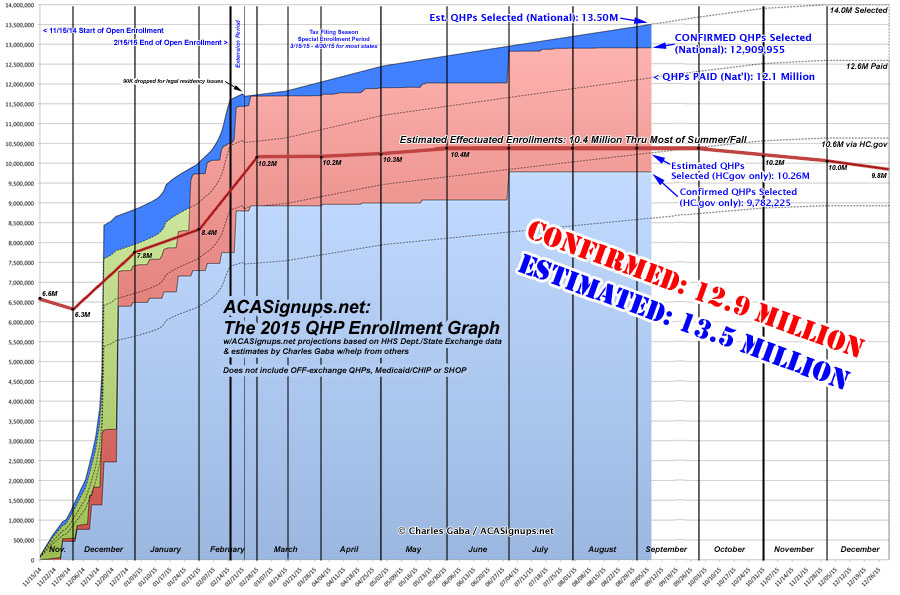 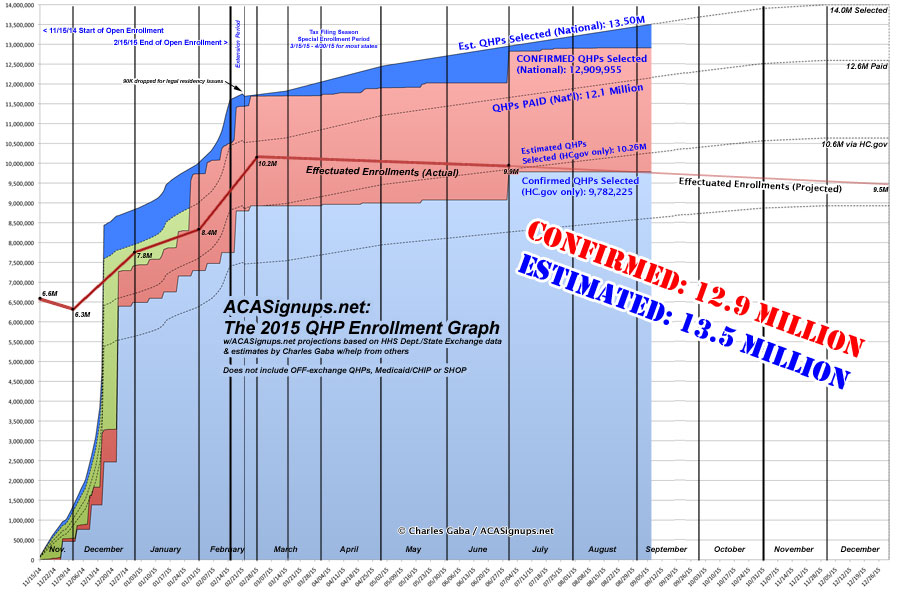 So, what other insight can be found here?

Well, it's important to keep in mind that those 423,000 people who were dropped for legal residency issues are only via Healthcare.Gov...that is, they don't include anyone dropped from the state-based marketplaces (exchanges) for this reason.

This explains why the relative ratio between HC.gov and the SBMs shifted significantly. During Open Enrollment, it was roughly 76% HC.gov / 24% SBMs, but this shifted to a 73/27 ratio by the end of June:

I'll post a detailed analysis of the state-level numbers in the next entry.