However, that still leaves the other three: Kaiser Foundation Health Plan, UnitedHealthcare of Mid-Atlantic and All Savers (which is actually a subsidiary of UHC, but lists separately). All three of these companies requested much lower rate changes (+4.8%, -0.5% and -3.2% respectively), and even with Kaiser being increased to a 10% hike still should lower the overall statewide average significantly...assuming the three have a significant combined market share.

Now, I do know that Kaiser and UHC had 17,791 and 3,157 enrollees respectively on the exchange as of February, and that the UHC number includes All Savers, which helps a little...but I have no clue what their off-exchange numbers are.

If there wasn't a single off-exchange enrollee for Kaiser/UHC off-exchange, the weighted average would have dropped from 25.3% requested to 20.0% approved:

These new rates announced today affect only a small percentage of Marylanders. Approximately 4.2% of Marylanders are in the small group market and 3.9% are in the individual market. More than 90% of Marylanders are covered by health insurance plans offered through large employers or employers who self-insure; “grandfathered” plans purchased before March 2010; or federal plans, such as Medicare, Tricare and federal employee plans.

Maryland's current population is roughly 5,976,000 people. 3.9% of that is about 233,000 people, a small number of whom are still in "grandfathered" policies which aren't impacted here. The number in the table is a bit higher (242K), but there's a lot of churn so it sounds pretty close to the mark. I'm a bit surprised as Maryland's 2014 individual market size was estimated at 280,000 by the Kaiser Family Foundation. In addition, I'd be very surprised if there aren't any off-exchange enrollments for Kaiser or UHC. It seems to me there should be roughly 40,000 more people enrolled off-exchange via these companies.

If so, then it would actually look more like this: 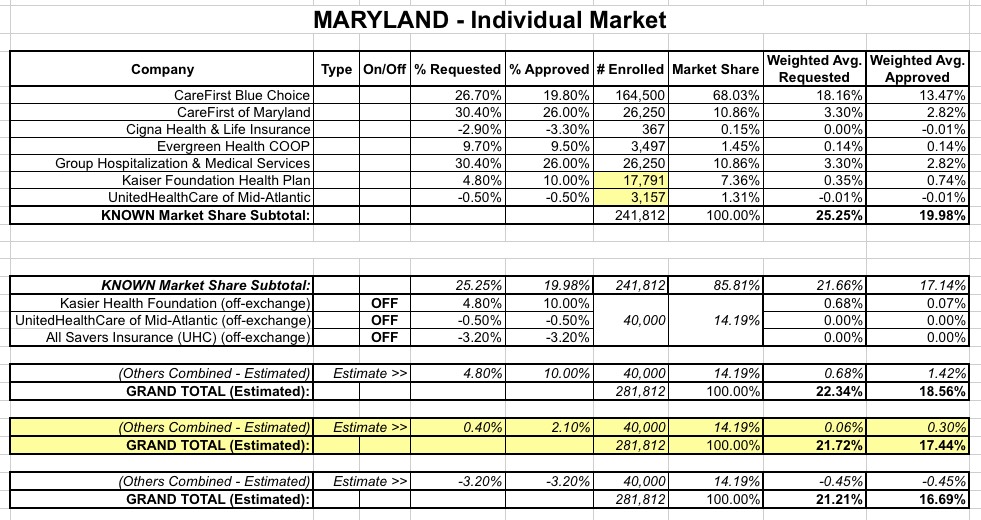 UPDATE: OK, never mind. This Baltimore Sun article makes it pretty clear that the total individual market really is just 233K or so this year:

Health care advocates criticized the CareFirst increases because they far exceeded those of other insurers and Carefirst dominates the market. It holds 94 percent of the individual market and 66 percent of the small business market.

If you add up CareFirst BlueChoice (68%), CareFirst of Maryland (10.9%) and Group Hospitalization & Medical Services (10.9%...GHMS is part of CareFirst as well), you get about 90%, which lines up pretty closely.