Premiums for individuals remain nearly 50 percent lower than prior to the establishment of the State’s health benefit exchange in 2014 – even before adjusting for inflation or federal financial assistance that is available to many consumers purchasing insurance.  Overall, DFS cut insurers’ requested 2016 rates by more than 30 percent in the individual and small group markets, which will save policyholders more than $430 million. Additionally, a new Essential Plan, available only through the NY State of Health, will lower premiums to $20 or less and provide better benefits for hundreds of thousands of lower income New Yorkers.

The "50% lower than pre-ACA rates" is admittedly a bit misleading: Prior to the ACA, New York already had a "guaranteed issue" law on the books (ie, no denials for pre-existing conditions...one of the legs of the "3-legged stool" included in the ACA), but without any corresponding tax credits or an individual mandate to ensure rates didn't spiral out of control (the other 2 legs of the ACA stool). As a result, pre-ACA individual market rates in New York were through the roof, making today's ACA-era rates seem dirt-cheap in comparison.

This, by the way, is one of the best examples of what would have happened across 3 dozen states if the King v. Burwell plaintiffs had won their case last month. Just saying.

As for the "Essential Plan" mentioned above, this refers to the "Basic Health Plan" allowed for by the ACA. It amounts to a sort of "Medicaid-Plus", and applies to people between 138 - 200% of the Federal Poverty Level (Medicaid itself covers those below 138% in expansion states). Until now, Minnesota was the only state with a BHP (mainly because it was already in place there prior to the ACA anyway); New York is the 2nd state to implement it. The impact this will have on the private policy risk pool is unknown.

Hmmm...OK, looks like my "requested" estimate was a bit too low (10.0% vs. 10.4%), but that's irrelevant now: The approved increase is just 7.1%. Again, this is higher than last year's average increase of 5.7%, but it's still a lot less than expected and well below the historical national average increase of 10-11% per year.

Here's some more info about the upcoming Basic Health Plan:

The Essential Plan will provide the same covered services as other plans offered on the Marketplace.  The Essential Plan has no annual deductible and lower copayments, making health care even more affordable for hundreds of thousands of New Yorkers.  For example, a person who earns about $20,000 a year and uses moderate health care services including an inpatient hospital stay, prescription drugs and doctor’s visits, will pay about $730 a year for premiums and out-of-pocket costs under the Essential Plan in 2016 as compared to about $1,830 in 2015 if they were enrolled in a Qualified Health Plan.

They also included information about the Small Group Market, which I only report on sporadically but which is obviously equally important:

Small Group Market
On average, insurers requested a rate increase of 14.4 percent in the small group market.  DFS cut the requested rates by 32 percent, to 9.8 percent.  A number of small businesses will also be eligible for tax credits that would lower those premium costs even further.

Again, I underestimated a bit; I had the small group requested average at around 13.9%; apparently it was 14.4%. Again, it's irrelevant now: The approved increase is 9.8% overall.

Interestingly, the approved weighted average also doesn't quite match up with my estimates; I assume that the market share numbers I have are slightly off from whatever the NY Dept. of Financial Services came up with: 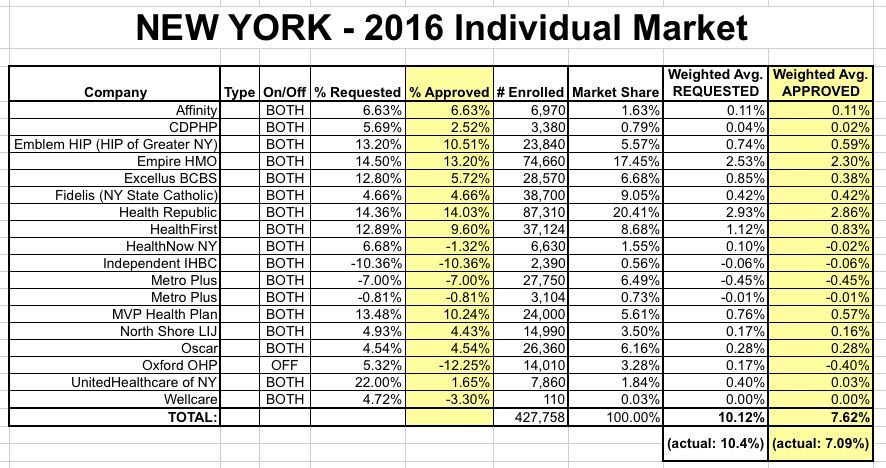 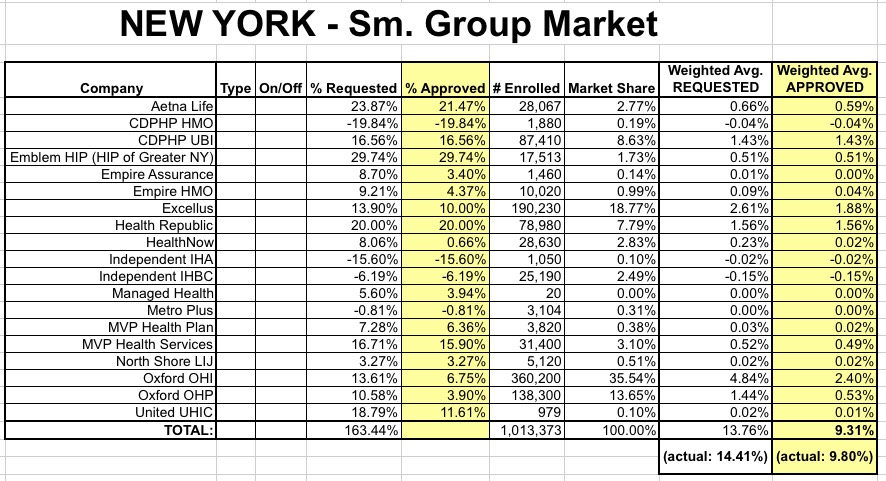