CA 2016 Rate Hikes: As if millions of ACA opponents suddenly cried out in terror...

Average Increase Is 4 Percent; Consumers Who Shop Can Lower Their Premium by an Average of 4.5 Percent

SACRAMENTO, Calif. — Covered California announced its rates for 2016 and unveiled which health insurance companies will be offering plans through the marketplace. The statewide weighted average increase will be 4 percent, which is lower than last year’s increase of 4.2 percent and represents a dramatic change from the trends that individuals faced in the years before the Patient Protection and Affordable Care Act.

This means the majority of Covered California consumers will either see a decrease in their health insurance premiums or an increase of less than 5 percent if they choose to keep their current plan. In addition, consumers can reduce their premiums by an average of 4.5 percent, and more than 10 percent in some regions, if they shop around and change to a lower-cost plan within the same metal tier.

I shouldn't have to point this out, but...

Needless to say, CA's rates only going up a mere 4% this year...after an already-impressively low 4.2% last year...is kind of a Big Deal.

In some regions of the state, it's even better news:

“Health care is local,” said Lee. “And as good as these average premium changes are across the state, it is important to look locally at each region. For example, in the two regions that encompass Los Angeles, the most populous regions in the state, the weighted average increase for consumers who stay in their current plan is only 1.8 percent. In addition, if they shop around, they could reduce their current costs by more than 11 percent by moving to a lower-cost plan in the same metal tier.”

Another indicator of the downward trend in premiums, which is used by some national comparisons of rate changes, is the change in the lowest-cost Bronze plan and the lowest-cost Silver plan. This is an important reference point because consumers have the ability to change carriers and plans. 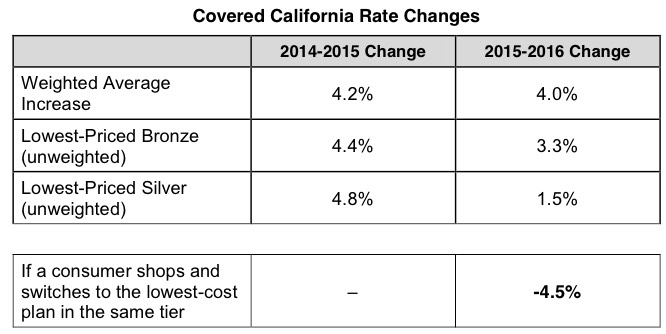 CoveredCA also noted that they're bringing in two additional competitors to the market this year:

UnitedHealthcare is the largest single health carrier in the United States, and it will be offering coverage in California in pricing regions 1, 9, 11, 12 and 13. Oscar is a new health insurance company that specializes in offering its members intuitive technology tools aimed at guiding them to better care. Oscar will offer plans in regions 16 and 18.

...Below is the complete list of the companies selected for the 2016 exchange:

There's a whole mess of other info available at the links included in the press release (see below), but the main point is that while yes, 2016 rates will be going up dramatically in many parts of the country, there are other states where they're going up nominally...and it's an excellent development that the largest state in the country happens to be among the "nominal" crowd. Equally important: Once again, even in the states where average rates are going up substantially, enrollees may be able to keep the increases to a minimum (or even save money) by shopping around.

And finally, the actual individual company plans and rates for next year:

UPDATE: It's worth noting (thanks Rebecca Stob!) that unlike most states, CoveredCA is an "active purchaser":

Lee noted that Covered California is an “active purchaser,” which allows it to choose which plans participate in the exchange and then negotiate the rates, networks and quality elements to get the best value for consumers. Covered California also created a standard benefit design, which establishes the services that plans must offer and creates a level playing field where health insurance companies must compete on price and quality.

As an aside, I should also note that while CoveredCA doesn't give an exact enrollment update here, they do confirm that active QHP enrollees (ie, effectuated enrollees) are still "more than 1.3 million", which means that the total has indeed held steady since March as I've been projecting nationally. "More than 1.3 million" could theoretically mean as few as 1,300,001, which would be a mere 3.1% net attrition rate since March (less than 1% per month), or as high as 1,350,000 (about a 0.5% increase...I assume anything higher would be worded as "nearly 1.4 million"). My own estimate over 10.4 million nationally corresponds to about a 2% increase over the end of March nationally, so it's safe to say that anywhere from 10.3 - 10.4 million is in the right ballpark.

Finally, considering that in some states, the insurance commissioner may be, shall we say, somewhat lacking in utilizing their authority to keep rates in check, this last point is crucial to remember:

“If you really want to see the potential of the Affordable Care Act, California is a good test case as a state that is using all the tools available to us,” Lee said.

UPDATE: Title changed. I just realized that ACA opponents will never be silenced no matter what.

And finally, just to remind everyone: PRIOR to the ACA, 10-12% annual rate hikes were typical nationally.

Update: Apparently, CoveredCA is targeting a net increase of 200K effectuated enrollees for the 2016 open enrollment season, or 1.5 million total. To achieve that, they'll have to hit about 1.75 million QHP selections this winter, which is actually just above their original target for 2015 (which they fell well short of).