UPDATE: Presenting the 1,000% Rate Hike, brought to you by the Republican Party & CATO Institute

In my latest exclusive over at healthinsurance.org, I break out the post-King v. Burwell carnage by the numbers. The short version?

While I go into the detail on each of these in the full entry, here's a table showing how it all breaks out.

Column A is the hard effectuated APTC-receiving enrollees as of 3/31, directly from the Centers for Medicare & Medicaid report last week.

Column B adjusts this number for the additional 105,000 or so who should have effectuated enrollments as of the end of June, added during the #ACATaxTime special enrollment period.

Column C is the average tax credit currently being received by each of these folks per state.

Column D shows how much the enrollees in each state would have to shell out in extra taxes (remember, these are tax credits which be lost) just in order to hold onto their policies for the balance of 2015.

Column E is how much these people are paying on average now...followed by Column F, which is how much they'd have to pay at full price for the rest of 2015.

Column G is the percentage increase, ranging from "only" a 132% spike in Arizona (from $120/month to $278/month) to a whopping 650% hike in Mississippi (from $50/mo to $405/month on average). So far, this is exactly in line with a similar report by the Kaiser Family Foundation...and that's certainly bad enough.

HOWEVER, the KFF report only uses 2015 premium rates. The much uglier consequences of a King v. Burwell plaintiff win won't be felt until 2016...and as you know, next year's rates are already likely to increase somewhat in most states regardless of the outcome of the King case, perhaps by an average of 10% or more.

A 10% average 2016 rate hike is shown in Column H...and instead of ranging from a 132% - 650% increase, now all these folks are looking at their premiums spiking even more, relative to the subsidized rates they're currently paying.

Remember that with millions of people forced to drop their policies, the insurance companies will be stuck with mostly higher risk, more expensive customers. That's called "adverse selection", and it means that they'll have to jack up their rates even more...by as much as 35-45% more, according to the Urban Institute, RAND Corporation and American Academy of Actuaries.

UPDATE 6/10/15: Robert Laszewski, a conservative health policy consultant who opposes the ACA but seems pretty intellectually honest about it, has confirmed that no, the currently posted rates do not include any additional post-King v. Burwell increases. 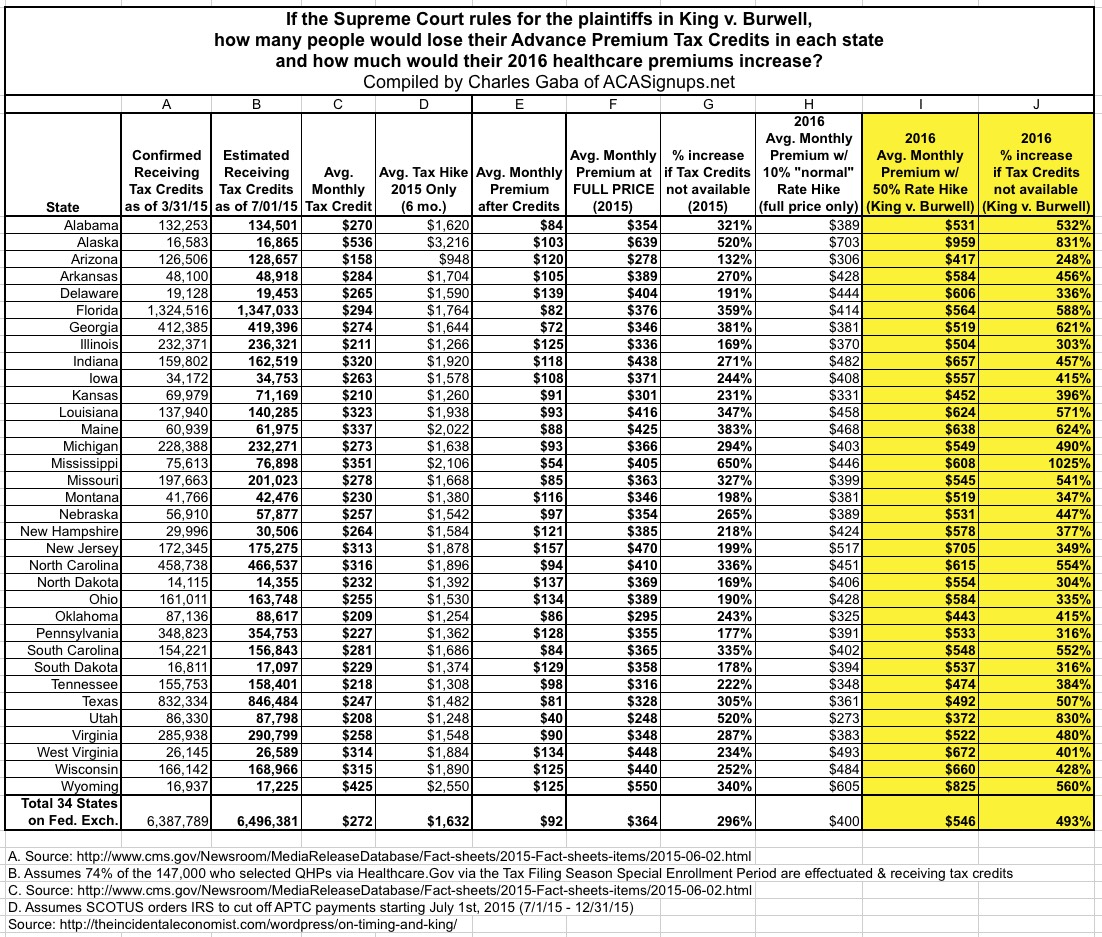 Yes, that's right: Someone in Mississippi currently paying a mere $54 per month could potentially end up being charged over $600/month for the exact same policy...over 1,000% (11x) as much. Even at the opposite end (Arizona) someone paying $120/month right now would be looking at over $400/month next year...a 248% spike.

Overall, the average rate hike in 2016 for someone currently receiving subsidies via the exchanges looks like it'd be around 500%.

All because someone at the CATO Institute found a typo, and the Republicans in Congress won't take 5 minutes out of their day to pass a 1-page bill to resolve the very issue they ginned up in the first place.

Oh, one more thing: Remember, all of this only includes those CURRENTLY enrolled in the 34 states in question. This doesn't include any of the millions of additional people who were planning on enrolling via Healthcare.Gov in these states next year.