UPDATED: Everybody Panic!! 64% rate increase requested...on policies which no one is enrolled in anyway??

Over the past few weeks, I've dug deep into the 2016 individual and small group market rate request filings for about a half-dozen states, including Michigan, DC, Washington State, Oregon, Connecticut, Maryland and Vermont. However, readers may have noticed that I kind of stopped after that, mainly because when I got to Virginia, I found an insane 6,000 page filing request and blanched.

As it happens, Healthcare.Gov has set up a nifty new section devoted to displaying a searchable database of exactly this type of data, RateReview.Healthcare.Gov: 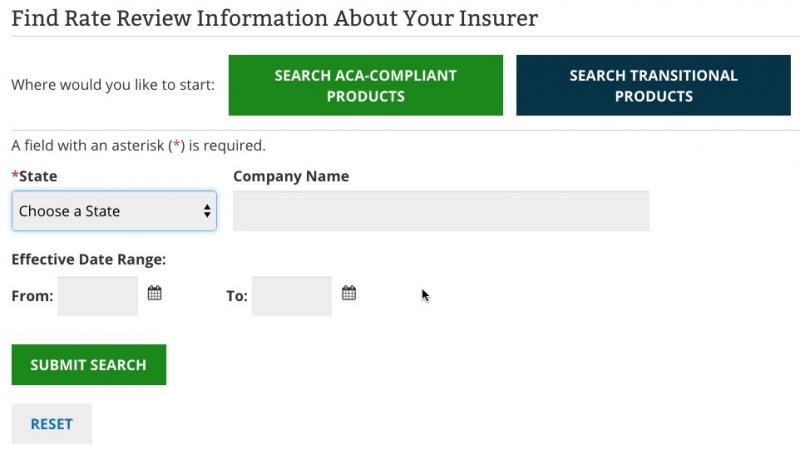 The good news is that it lets you filter out "transitional" (grandmothered) policies, lets you choose by state or company, clearly indicates the year in question (1/1/2016 is what's relevant here) and displays all results in a consistent, easy-to-find format which cuts out all the gibberish.

The bad news is that the results actually cut out a bit too much information; they don't list the number of covered lives impacted (that is, the company's current market share), nor do they break out enrollments by metal levels/etc. within each company.

As I noted in my latest exclusive at healthinsurance.org, those are important pieces of the puzzle, because it doesn't mean much to say that the "average" rate increase in a state is 15% if it turns out that one company with 90% of the enrollees only raises rates by 10% while another company with 10% of the enrollees raises theirs by 20%. You have to look at the weighted average in several different ways to get a clear picture.

Furthermore, again, these are requested rates only. A company can ask for a 1,000% spike; that doesn't mean they're gonna get it...and for that matter, in that instance their actual effective "rate increase" will technically end up being -100%, since they'd lose every customer they have.

The Rate Review site has actually been available for awhile now, but only listed 2014 and 2015 filings until recently, which are only indirectly useful for looking ahead to 2016. Supposedly the 2016 requests are supposed to be posted there as of today (June 1st), but so far it looks like only a handful of states have 2016 data listed. Perhaps they're uploading it as I type this?

Unfortunately, there seem to be some...um...discrepancies in the system so far. For instance, it looks like Arkansas is one of the states which has already posted their 2016 requests... 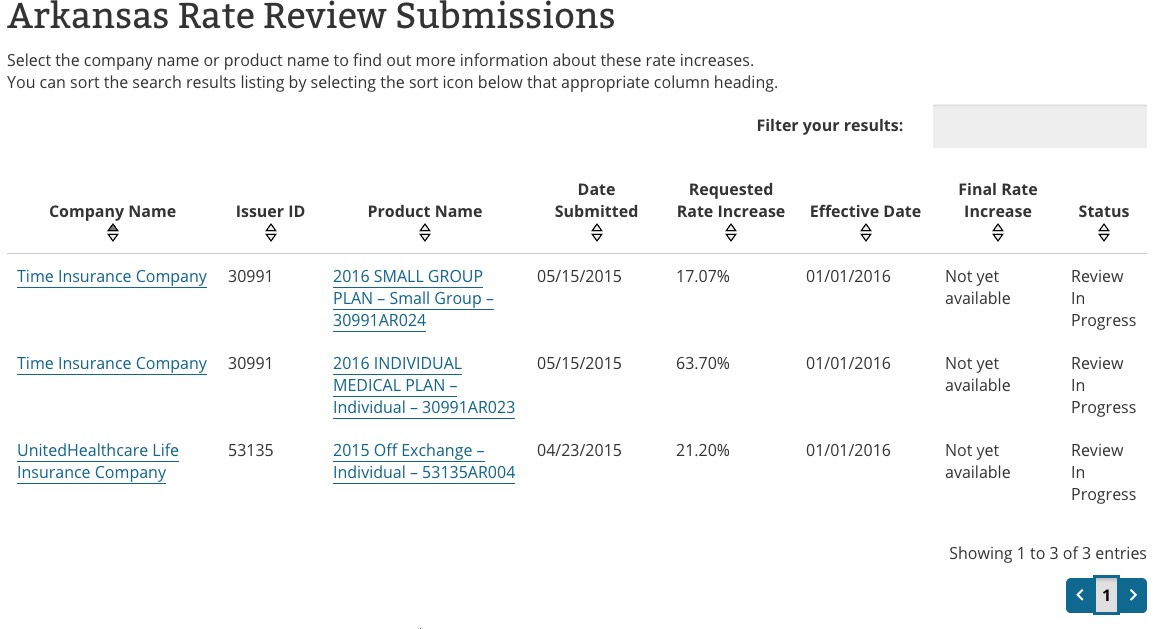 ...and holy crap!! Time Insurance is asking for a 64% rate hike on the individual market??? AIEEEEEEEE!!!!

But wait a minute...when you look at the actual rate filing for Time Insurance, check out the description at the bottom: 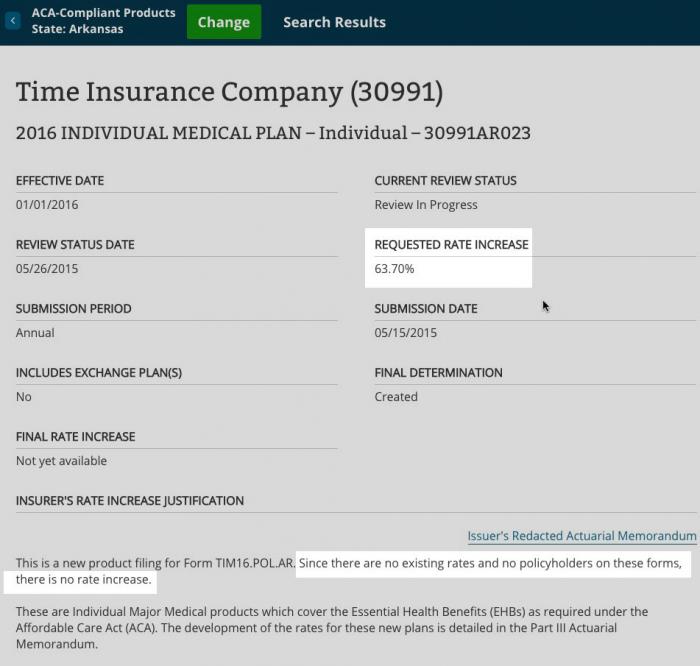 "Since there are no existing rates and no policyholders on these forms, there is no rate increase."

Um...OK...so Time Insurance is asking for a 64% rate increase on policies which don't have anyone enrolled in them in the first place??

This is for off-exchange policies only, and Time doesn't appear to even be available on the Arkansas ACA exchange in 2015 (I checked in Little Rock, anyway; it's possible that they're available in some counties but not others?), so I'm assuming that they're brand-new to the state next year, and if so, that's fine.

However, this still makes little sense. There's three possibilities here: Either this is a clerical error (in which case, how many others are there which will make people panic for no reason?), or I'm reading it correctly (in which case it's just silly to list a "rate increase" at all) or there's some other factor here that I'm just not understanding.

In any event, this is yet another good example of why you should take these initial rate request filings with a huge grain of salt.

UPDATE: OK, thanks to commentor "intheknow" who points out that according to the "redacted" rate filing memorandum for Time Insurance in Arkansas, the discrepancy is explained as such: 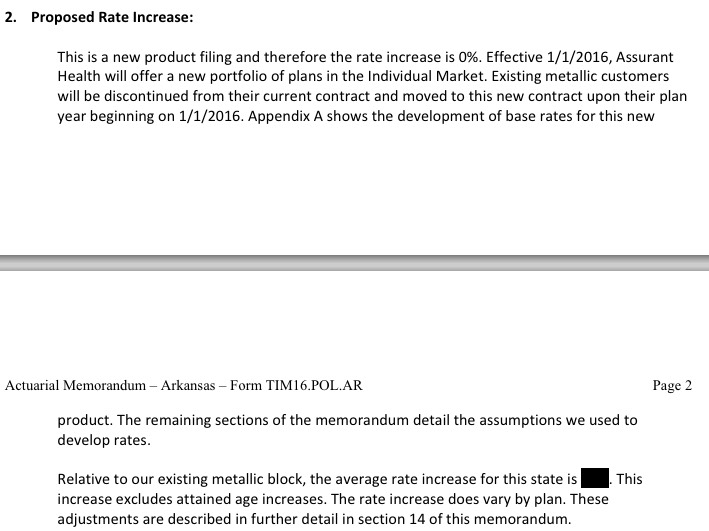 In other words, Time Insurance is dropping all of their current 2015 policies and replacing them with all new policies. Therefore, technically speaking, the 2016 policies don't have any current enrollees...but at the same time, they'll be priced with premiums roughly 64% higher than the "equivalent" existing metal level policies.

So,this answers one question...but it raises several others.