The 2016 Rate Request Train continues to chug along; in addition to Oregon, Washington State, Connecticut and Michigan, I can now add the District of Columbia to the list.

The first thing to note about the DC market is that one of only two (the other is Vermont) in which all individual and small group enrollments are done through the ACA exchange; no off-exchange enrollees here. That makes things a bit simpler.

In addition, the DC Dept. of Insurance, Securities & Banking has also provided a handy table showing the year over year changes on both markets:

As you can see, DC has a pretty simple setup; 4 insurance companies operating in the Small Business (SHOP) exchange, only 2 of which are operating on the Individual exchange (and one of those, Kaiser, is only offering HMOs, not PPOs). An unweighted average of each gives the following:

However, when you look at the actual rating requests, you get something quite different: 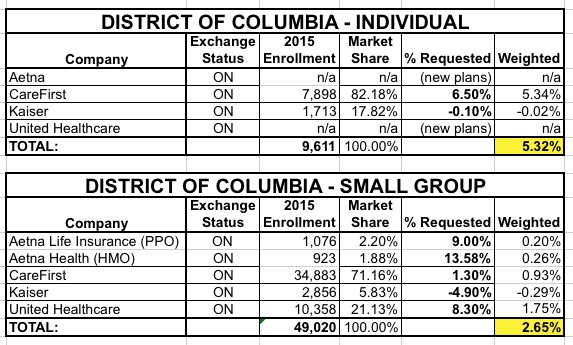 Why the huge difference? Well, note that the first set of tables specifically state that those are only for plans which existed in 2015 and are still being sold in 2016. On the individual market, Aetna and UHC appear to be replacing all of their 2015 policies with brand-new ones which may or may not have any resemblance to the existing ones, making an apples-to-apples comparison difficult. This is also the main reason why the "total" individual enrollments are listed as just 9,611 even though nearly 20,000 people selected plans for 2015 (of whom about 17.5K actually paid up). presumably the remaining 8,000 or so are enrolled through Aetna and UHC, but I can't compare their rates for next year, skewing the results...so I don't know how accurate that 5.32% weighted average really is.

Things appear to be more accurate on the Small Group (SHOP) side, where the weighted average is a mere 2.65%.