A week or so ago, U of Michigan assistant law professor Nicholas Bagley and his associate, Boston U. public health asst. professor David K. Jones) posted a lengthy, comprehensive analysis of potential post-King v. Burwell options for the HHS Dept. and/or the impacted states in the event that the Supreme Court rules in favor of the plaintiffs. As I noted at the time, several of their points were very close to my own last July...except that I was just shooting off at the mouth, whereas they actually know what they're talking about, legally speaking.

Today, Bagley has posted a follow-up which focuses even more closely on my line of thought:

What if HHS declared that any state that performs substantial, ongoing, and essential exchange functions has established an exchange, even if the state never formally elected to do so?

The idea is not as outlandish as it might at first sound, as David Jones and I explain in an essay at the Yale Law Journal Forum. The ACA doesn’t define what it means for a state to “establish” an exchange. And the word is at least somewhat ambiguous. As the ACA uses it, “establish” means “[t]o make or form; to bring about or into existence.”

As I put it last summer, albeit in a more ham-handed way:

However, if the courts decide to look at the case on the "micro" level--parsing exact definitions of the word "State" (which seems to be the concensus as to how they're proceeding from the people I've talked to about it), then they'll also have to (or at least certainly should) also look equally closely at two other words: "Establish" and "Facilitate."

So, as I said, depending on how the court defines the terms "establish" (ie, to "establish" an insurance marketplace) and "facilitate" (as in, "facilitating" the purchase of insurance policies through the marketplace), it's conceivable that all it would take for any of the individual states to "establish" their own exchange would be to register a domain name at GoDaddy or wherever and set up a simple welcome/information portal site...which would then lead them to HC.gov for the actual purchase of the policy.

At the time, I was making my case for the "GoDaddy/Grand Slam" workaround (which Bagley thought might be viable initially but later dismissed as being completely unworkable), but Bagley/Jones are applying this to the next part of my post from last July. They go on to say:

Given these broad statutory delegations, HHS could revise its regulations and the Blueprint to provide that some states should be understood as having established an exchange, even if they never formally elected to do so. Consider, most notably, the fourteen states that conduct plan management functions for their federally facilitated exchanges. They include the seven “partnership” states (AR, DE, IL, IA, MI, NH, and WV) as well as seven others that did not apply for partnership status (ME, VA, OH, KS, NE, SD, and MT). These states already perform many of the core functions of an exchange. They are primarily responsible for certifying whether health plans meet federal standards for exchange participation; they monitor those health plans to assure their compliance with those standards; they oversee quality reporting requirements; and they collect data from the plans on their rates and benefits.27

As Bagley puts it today:

Might the performance of these essential exchange functions, over time, constitute the establishment of an exchange? The argument finds some support in the ERISA case law, of all places. The courts have consistently rejected the argument that an employee benefit plan is “established” within the meaning of ERISA only when an employer says that it has established a plan. Instead, “it is the reality of a plan, fund, or program and not the decision to extend certain benefits that is determinative.”

Unfortunately, he concludes that he has no clue whether the Court would buy this argument or not...but if it did, that would instantly resolve the issue for 14 out of 34 states. 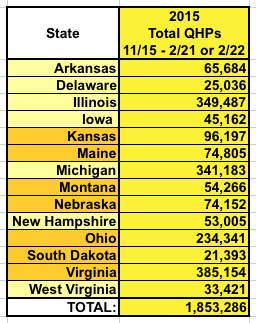 How many people's tax credits would this workaround save? Well, Bagley gives a round estimate of 3 million, based on this estimate from the Kaiser Family Foundation regarding how many people could potentially lose their credits if the King plaintiffs win. However, that's based on hypothetical enrollment numbers in 2016, not the actual, existing HC.gov enrollees as of July 2015 (ie, the earliest date by which such a ruling could result in people losing their credits).

To get that number, first we have to look at how many people will actually be enrolled in those 14 states. As of 2/22/15, all 14 only added up to around 1.85 million people...and of course you then have to chop that down a bit:

If that doesn't sound like much (only 21-22% of the 6.5 / 6.7 million who would otherwise lose their credits across all 34 / 37 HC.gov states), remember that the other 23 states not listed here include behemoths like Texas, Florida, Georgia and North Carolina.

On the other hand, remember that for all those whose actual tax credits would be saved, there'd be a roughly equal number of additional people who would avoid up to a 45% rate spike to their insurance policies as well...so we're really talking about saving perhaps 2.8 million people from being left dangling here.

Meanwhile, Jonathan Cohn has a great piece on King v. Burwell over at Huffington Post which, among other things, gives the expected date of the SCOTUS announcement:

Most experts expect the court to rule on King v. Burwell, as the case is known, on or around June 29, which is the last official day of its term.

As it happens, June 28th (1 day earlier) is my birthday, and was also the date of the first huge SCOTUS Obamacare decision 3 years ago (NFIB v. Sebelius). So, there's that.