This evening I'm reposting one of my more popular entries from last September, because I have a couple of updates to it:

From "It'll Destroy America!!" to "It Doesn't Suck But It Will Someday!" in 10 Easy Steps

(ok, this one is a gimme; the technical mess at HC.gov and some of the state exchanges did make it almost impossible for anyone to sign up the first month.)

...which was clearly already being proven wrong by the time Thanksgiving rolled around.

...that is, until the Christmas/New Years spike, which brought the total enrollee figure up to over 2.1 million.

...which actually turned out to be only around 1-2 million people at most, the vast majority of which (including myself) simply swapped out their old policies for new ones.

...well, this seemed a wee bit early to be asking that question considering that the policies for over 52% of the eventual enrollees wouldn't even take effect until April or May, but in the end the answer turned out to be around 90%.

...around 43%, as it would eventually turn out, which is even lower than the 50% I had estimated.

Um...not so much; more like 3% per month, give or take, which is natural, expected, after being partially balanced out by off-season enrollments.

...which brings us to September, and Avik Roy's latest talking point, which boils down to:

His premise boils down to two main points:

First, he claims that the ACA has already casued a "rate increase of 49%", which I've already demonstrated is hogwash (to reach that conclusion, the study he cites compares "discount cards", which amount to coupon subscriptions and which don't include actual hospitalization coverage, etc. against actual healthcare insurance policies by any reasonable definition of the term).

Second (and this one may have some merit in the future), is that the risk adjustment/reinsurance/risk corridor provisions in the ACA (which ironically amount to insurance policies for the insurance companies) will be running out at the end of 2016 (emphasis mine):

Importantly, a set of Obamacare exchange provisions called the “three Rs”—risk adjustment, reinsurance, and risk corridors—effectively encourage insurers to offer premiums on the exchanges that are imprudently low. If you are an insurance company, and you lose money because your premiums were lower than your actual claim costs, Obamacare subsidizes that loss for you. It’s this part of the law that Sen. Marco Rubio (R., Fla.) and others have been calling a “bailout” of participating insurers.

The problem is that the “three Rs” are transitional. Reinsurance and risk corridors expire at the end of 2016, at which point insurance companies like Aetna, Humana, and Cigna will have to charge premiums in line with their costs. That may lead to a spike in premiums in 2017.

Of course, there's a rather obvious reason for his insistance on using the "O" term so much.

On the other hand, that's an awfully big "may".

Maybe he'll prove to be correct. Maybe premiums will shoot through the roof in 2017.

Update 5/06/15: Well, Roy may have turned out to be at least partially correct about this one, based on this early report from Standard & Poors...except that it might not be quite that simple, according to this analysis by actuary Rebecca Stob).

However, there's about 100 other things which may happen between now and then as well. Maybe the new Apple Watch will help usher in a new age of personalized healthcare monitoring which will lower costs. Maybe the other 20-odd red states which have refused to expand Medicaid will finally stop being jerks about it (as Pennsylvania, Utah, Tennessee and even Wyoming appear to be on the brink of doing). Maybe the cost of Medicare will continue to drop for whatever inexplicable reasons you care to cite.

Even if Roy proves to be correct on this, it doesn't change the fact that opponents of the Affordable Care Act have been forced to change their tune from "Obamacare will turn America into a post-apocalyptic wasteland!!" to "Well...ok, maybe it won't, but that doesn't make it awesome, and it'll probably suck in a few years."

That brings things up to date. Now that the second enrollment period is under our belt and anywhere from 14 million to 17 million people are newly insured thanks to Obamacare, they've rolled out a new attack:

Republicans are shifting their line of attack on ObamaCare, abandoning assertions that few people are taking advantage of the law for new arguments that enrollees are getting stuck with low-quality insurance plans.

Republicans initially argued the Affordable Care Act (ACA) had not made a dent in the size of the uninsured population. Speaker John Boehner (R-Ohio) said in March 2014 that the law had led to “a net loss of people with health insurance” because of canceled plans.

...“I don’t think it means anything,” [WY GOP Sen. John Barrasso] told Fox News. “They are cooking the books on this.”

...Republicans are now acknowledging that an expansion has taken place, but are pointing to the quality of the insurance that people are gaining to argue that the law is still bad for the country.

Asked Sunday about his previous statement, Boehner said on NBC’s “Meet the Press”: “Yeah, you know why there’s more people insured? Because a lot more people are on Medicaid.

“Giving people Medicaid insurance is almost like giving them nothing, because you can’t find a doctor that will see Medicaid patients,” Boehner added. “And so where do they end up? The same place they used to end up, in the emergency room.”

Speaking on the Senate floor last week, Barrasso did not mention the number of people who have signed up; he instead focused on the caliber of the coverage, saying, “there is a difference between coverage and care.”

...Republicans have also pointed to a survey released this week showing that most emergency room doctors have seen an increase in patients, despite the law’s intention to reduce the need for people to rely on emergency rooms for care.

Of course, it turns out that the ER visit study being touted by the GOP is seriously questionable for at least two reasons:

As for the "they're all on Medicaid!!" whining by Boehner, it's true that many, possibly even most of the newly insured are via Medicaid or CHIP...but a couple of things:

Finally--and this is the key thing--even if it turns out that most of the newly enrolled are via Medicaid...what's wrong with that?

Yes, it's true that Medicaid enrollees do have a hard time finding a doctor to treat them...but at least they have a chance at doing so. Given a choice between Medicaid and nothing, I somehow suspect that just about anyone would prefer Medicaid.

In fact, according to at least one study (admittedly only covering Michigan residents, and conducted in 2012, well before the exchanges launched), Medicaid enrollees were actually more satisfied with their coverage than anyone else, including even Medicare:

Michiganders covered by Medicaid reported the highest satisfaction with their insurance, outpacing those who get their health coverage from their employers, buy it themselves, or participate in Medicare.

On the opposite end of the spectrum, Medicaid recipients were the least likely to report a negative experience with their coverage (41 percent) and yet were the most concerned about losing their coverage.

“These results tell us that those with Medicaid coverage greatly appreciate it.  They tend to have higher health needs, and so their coverage is valuable to them,” said Udow-Phillips.  “Combine this with the results from our “Access to Health Care” brief showing more than 90 percent of Medicaid recipients had easier access to care in 2012, and you see a positive trend for Medicaid in Michigan.”

...poor residents of Arkansas, Kentucky and Texas, when asked to compare Medicaid with private coverage, said that Medicaid offered better “quality of health care” and made them better able to “afford the health care” they needed.

Medicaid, the federal-state program for poor and disabled Americans, is a frequent political target, often described as substandard because of its restricted list of doctors and the red tape — sometimes even worse than no insurance at all.

But repeated surveys show that the program is quite popular among the people who use it. A 2011 survey from the Kaiser Family Foundation found that 86 percent of people who had received Medicaid benefits described the experience as somewhat or very positive. A slightly more recent Kaiser survey showed that 69 percent of Americans earning less than $40,000 a year rated the program important to them or their families.

Of course there is still a real danger to the Affordable Care Act looming...the King v. Burwell decision. Then again, that particular threat was ​created by Republicans in the first place, so I can't exactly count that one. 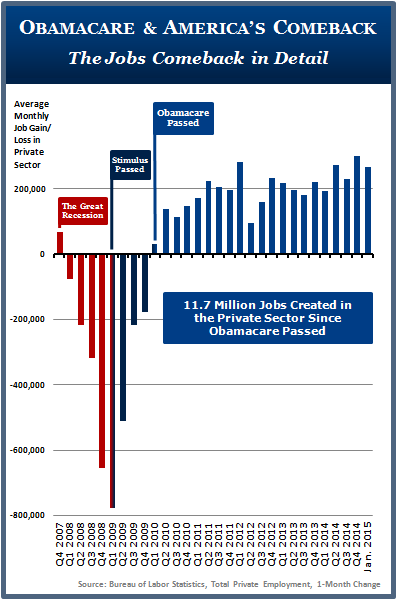