As of last Thursday, total QHP selections on the Massachusetts exchange were up to just shy of 119K. Between the weekend and the massive snowstorm that MA is digging out of, they went 5 days without a dashboard report, until today: 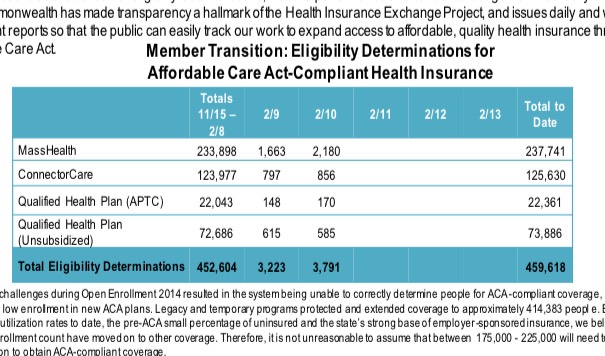 Of course, that means that there's also another 99,000 people who started the process and have been approved for a private policy, but who may--or may not--have actually completed the process. Heading into the final 5 days, I presume that more and more of this enrollee pool will be scratched off the list; if, say, 80% of these folks follow through, Massachusetts would hit at least 200,000 QHPs by Sunday night.

I've already stated, repeatedly, that my original target of 300K for MA was simply absurd, based on my misunderstanding the nature of their "temporary coverage" situation. A week or so ago I downshifted this to 200K even, which is looking much more reasonable now.

The elegibility number is identical to the report above. The enrollment number includes both MassHealth (Medicaid) and paid QHP enrollees only. Subtract the 237,741 from that and you have 100,918 paid QHPs out of the estimated 122.6K selected, or an 82.3% payment rate.