Last week, after having hunted down the current QHP enrollments for about a dozen states, I tallied them up and concluded that the average "attrition rate" for private ACA exchange policy enrollments was around 2% per month since April, after lopping off about 12% for those who never paid their first premium.

I still stand by this, but an extensive discussion with Jed Graham of Investors Business Daily made me realize that presenting it this way can lead to confusion, because I'm essentially mixing together two different estimated numbers (% paid & attrition rate), each of which may vary widely from state to state, instead of simply comparing the number of people currently enrolled against the 8.02 million who had enrolled (whether paid up yet or not) as of April 19th.

When you do that, you get two different answers, depending on whether you include Florida or not (and there's a very good reason why I've run the numbers both ways, which you'll see in a moment). 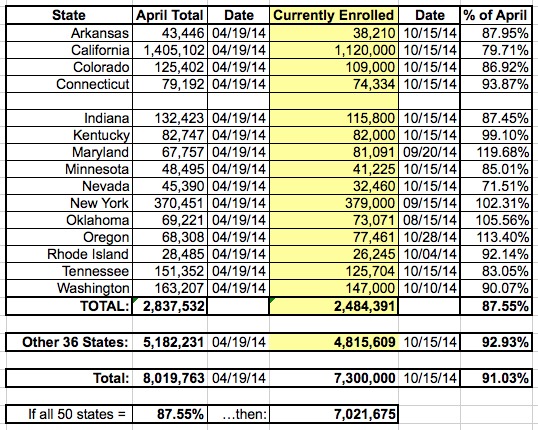 NOTE: The source for the "currently enrolled" numbers in all of the above states is either the state-based exchange or the state insurance commissioner's office.

A couple of things: First, for New York State, the current number is actually somewhere between 347,000 - 411,000; nearly 1,300 zip codes in the state have "fewer than 50 people" enrolled via this handy tool I mentioned being utilized by Dan Goldberg and his companions over at CNY last week. Assuming an average of 25 per zip code and you get around 379K in the Empire State...which is around 2% higher than the April 19th total.

I essentially have current data (almost all are from mid-October; Maryland & NY are mid-September, and Oklahoma is from sometime in August) for 15 states. These states make up around 35% of the national total of 8.02 million.

Based on this, the current number of people enrolled seems to be roughly 87.5% of the April total. Extrapolating this out nationally, that would be around 7.0 million people even ​currently enrolled in private QHPs via the ACA exchanges...precisely what the CBO was projecting way back in May 2013 in the first place.

Of course, the actual number could be higher or lower than that. 35% is a pretty good base, but notice the wide variants within that--Nevada only has 71.5% of their April total, while some states (Maryland, Oregon and even Oklahoma) have substantially higher numbers than last spring.

In September, HHS Secretary Sylvia Burwell surprised everyone (including myself) by finally tossing out a key data nugget: 7.3 million people were "currently enrolled and paying" for their ACA policies "as of August 15th". The fact that this was the only data point issued led some ACA critics, particularly Bob Laszewski and Megan McArdle, to suggest that the timing of that announcement was no coincidence. They figured that because the ACA allows a 90-day grace period before insurers are allowed to kick people off the rolls, that there may have been a ton of people whose policies started in May, who paid for 1 or 2 months, then stopped paying at all, leading the insurance companies to drop their policies in August or September.

In addition, they figured that a bunch of people would be dropped in October due to them having immigration/citizenship data issues, and that some other number would drop their policies themselves due to losing their federal tax credits over income data problems. I thought the 3-month grace period issue was interesting, but have dismissed the immigration data issue as likely being nominal at most.

In any event, it now looks like there may have been some truth to the "Grace Period" theory. If so, then 7.3 million currently enrolled people may have been the high water mark after all, after which there's been a gradual drop-off of perhaps 300,000 people who were either dropped involuntarily or who chose to drop out for their own reasons.

OK, so what about Florida?

Well, here's what the same chart looks like with FL thrown in: 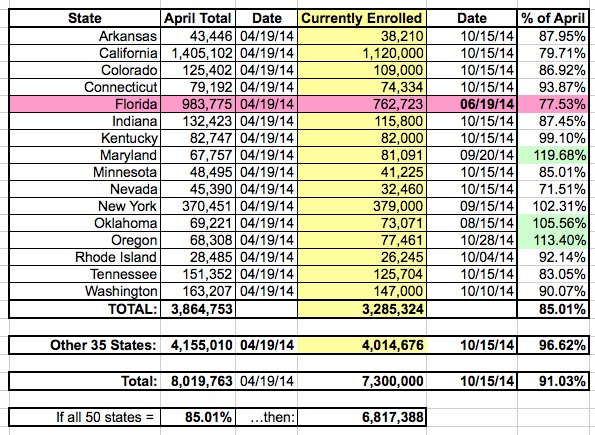 As you can see, with Florida thrown into the mix, the national estimate gets knocked down by another 200K, from 7.0 million to 6.8 million, for two reasons: First, Florida's original enrollment total was the 2nd highest in the country (984,000, 2nd only to California); second, because their "current" retention rate shown (77.5%) is the 2nd worst of all the states I have data for (only Nevada is lower).

So why don't I just include Florida outright? Simple: Look at the end date of June 19th. That's far too long ago (I was iffy about including Oklahoma as well, but August is still a lot more recent than June). Not only is that missing 4 months of data, it also flies completely in the face of the "3 month grace period" theory. How could Florida have already lost 220,000 enrollees (or, more accurately, had 220K either never pay up in the first place or get dropped immediately) by June? Was their payment rate that much worse than average? If so, why? Unlike Nevada (which had horrendous technical glitches), FL is run through the federal exchange, so they shouldn't have had any more issues than any other state run though HC.gov. California's number look similar (79.7% retained, huge state), but the CA number is as of October, not June; major distinction...and it's still 2 percentage points higher.

It would be very helpful if I could get a more recent Florida figure than June...except I can't. I know this because I've tried...and according to the Florida Dept. of Insurance, the current enrollment figures are protected as trade secrets by state law, which has led to some questioning of the methodology used to calculate the 2015 rate increases announced back in August.

In other words, there's something very peculiar going on in Florida here...but I have no way of knowing what that is, since the state isn't legally allowed to tell me.

In any event, there you have it. IF the other 2/3 of the states follow similar retention patterns to the 1/3 I have data for, the current number enrolled in exchange QHPs as of this writing should be somewhere between 6.8 - 7.0 million people.

On the other hand, given the wide variances noted above, it's also possible that the drop-off has been far less dramatic than that. As you can see above, while the 15 states listed are averaging about 12-15% less than April, the current total could still be around 7.3 million if the other 35 states (+DC) have 93-96% of their April figures. This is highly unlikely, but it's possible.

I've modified both my Attrition Rate Projection Chart as well as The Graph accordingly: 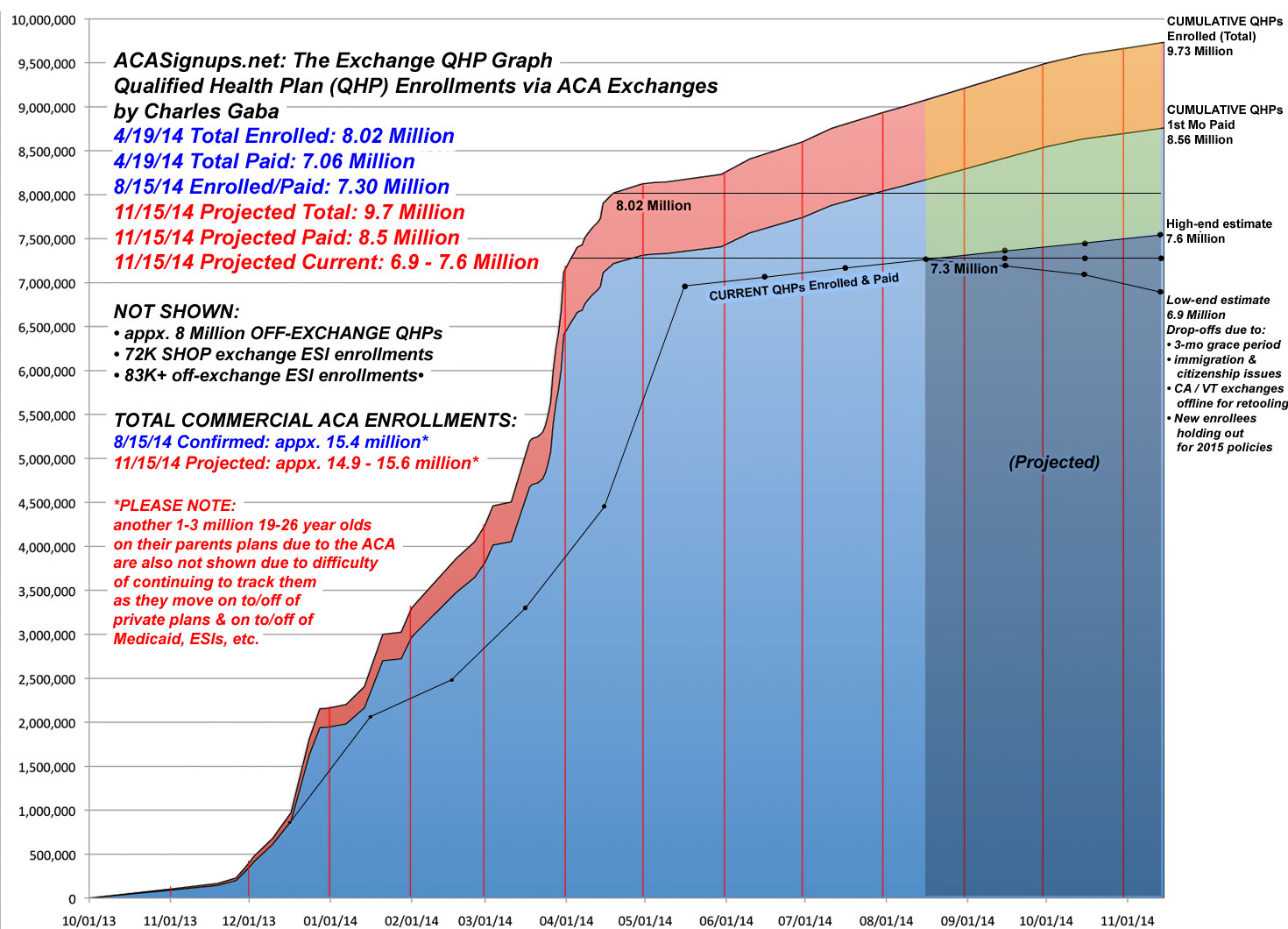 Now, on the one hand, ACA opponents will no doubt try to claim that this "proves" that the Obama administration was "cooking the books" and that the total never "really" broke the 7 million projected by the CBO back in May 2013.

On the other hand, this is pretty silly. I don't think anyone was arguing that every one of those 7 million people would start on 1/1/14 and keep their policies intact all the way through 12/31/14. I've always argued that it's perfectly fine to not include those who never paid their first premium (ie, the actual April figure should probably have been announced as being more like 7.1 million instead of 8 million), but that's getting into semantics. There's how many went through the enrollment process, how many of those paid their first premium and how many are currently enrolled; lots of different ways of presenting the data.

In addition, as I've pointed out many, many times before, there's all sorts of perfectly legitimate reasons why people drop their coverage, such as turning 65 and moving to Medicare, gaining a job with benefits and so forth...but it would still be nice if HHS would provide more clarity about what the current number actually is and what the churn rate has been throughout the summer & fall.

All this really means is that instead of the "Exchange QHP Renewal" pool being 8 million (which it never was) or 7.3 million (which it was back in August), it's more likely around 6.9 million, which is perfectly fine with me. If you assume that around 5 million of these were part of the original 22 million uninsured "target pool" for exchange QHP enrollment, there's still up to 17 million to focus on for #OE2.

Speaking of which, I'll be posting my official #OE2 enrollment projection sometime between now and the 15th; stay tuned!