Urban Institute joins the crowd: 4 major surveys agree, U.S. uninsured down by 10-13 million due to ACA

Hot on the heels of this morning's Commonwealth Study survey, which pegs the reduction of the number of uninsured adults at 5% (around 9.5 million, plus perhaps 2.5 million children under 18, for a total reduction of around 12 million) comes another study by the Urban Institute, which gives a slightly smaller reduction (4% of all adults nationally, or around 8 million...or around 10.5 million or so if you add children in).

The Urban Institute survey may be lower than the other three, but the RAND study was actually quite a bit higher (remember, it was conducted back in mid-MARCH, meaning that RAND was claiming a 9.3 million uninsured adult reduction before 40% of the Open Enrollment enrollees had even signed up), so it's looking very much like Gallup and Commonwealth have  hit the nail pretty much on the head.

Still, this does suggest that if all 50 states had taken ACA expansion, the uninsured rate nationally could have dropped by as much as an additional 4 million people by now. What a shame. 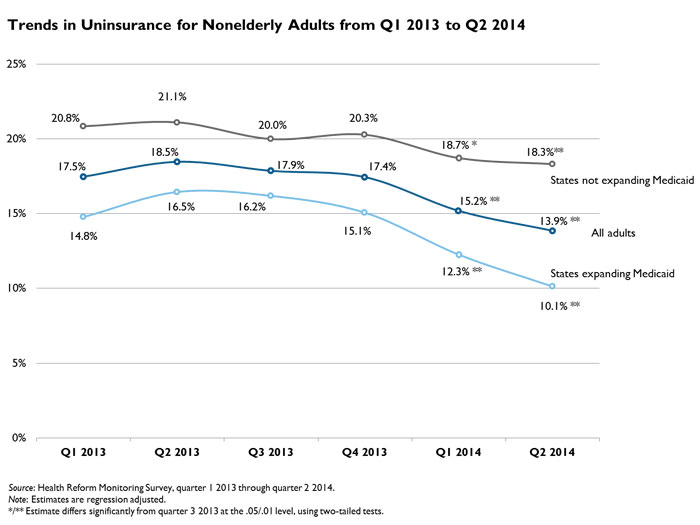