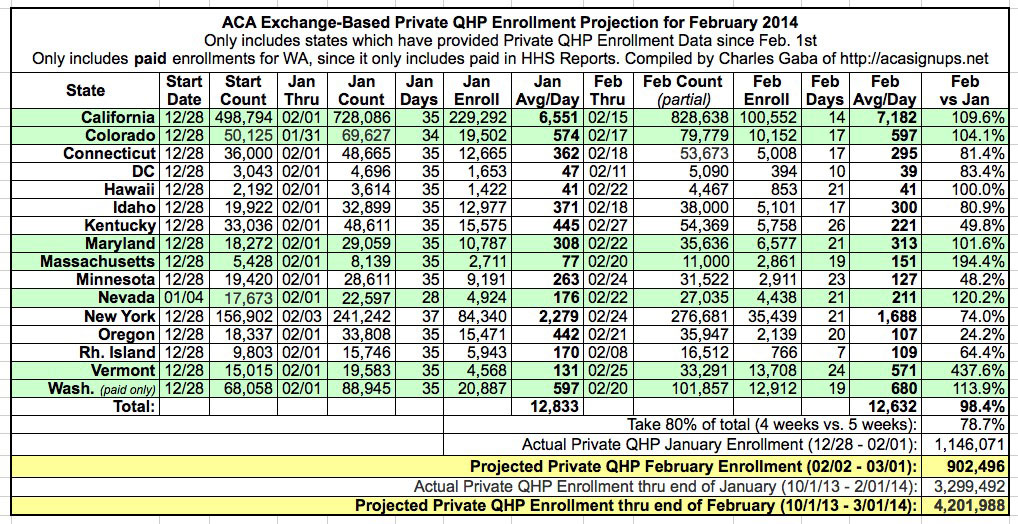 Next comes the "Paid vs. Unpaid" factor. Notice that only 1 state (Washington) specifies "paid only", even though there are 6 other states which have started reporting the breakdown between the two (Maryland just started doing so yesterday). Until yesterday I was carefully only including paid enrollments for all 7 states in the projection...but this morning I realized that the HHS report will probably include unpaid as well...for every state except for Washington.

Since for purposes of this prediction, I'm trying to guess what the HHS report itself will be, I went back and added the unpaid numbers back into the projection model, which raised the total estimate up by about 15,000 from my "final call" tweet last night (serves me right for including "final").

In other words, the number of paid enrollments will probably still be around 20-25% lower than the HHS total (around 3.3 million).

However, as I've repeatedly pointed out on several occasions, there's nothing either surprising or even concerning about this, because many of the unpaid enrollments are due to the premiums not being due yet, while others (including my own family's situation) are due to the insurance companies themselves having a screwed-up billing system which may take a month or two to sort itself out.

That said, there are still a number of people who haven't paid their premiums yet which can't be blamed on the insurance companies or the payment deadlines either, which I'm putting at around 10% or so.

So, if you want to be a real stickler about it, call it:

--I'm not including the (admittedly few) SHOP Small Business enrollments, which really should be included since they're part of the ACA exchanges.

--More importantly, I'm not including the large number (at least half a million, most likely 2-3 million or more) of off-exchange (direct) enrollments. Whether these should be included or not is a matter of perspective, but they certainly shouldn't be written off either.

So, there you have it: I'm saying that the HHS Report itself will state 900K in February, 4.2 million cumulative. We should know in about 2 weeks whether I'm full of beans or not.