OEP 2023: Has SBM enrollment stalled out?

As I noted in yesterday's analysis of the semi-final 2023 Open Enrollment Period report released by the Centers for Medicare & Medicaid Services, one of the most striking data points we're seeing this year is a significant drop in year over year on-exchange enrollment across a number of states operating their own ACA exchanges...even as enrollment continues to surge across states hosted on the federal exchange (HealthCare.Gov). 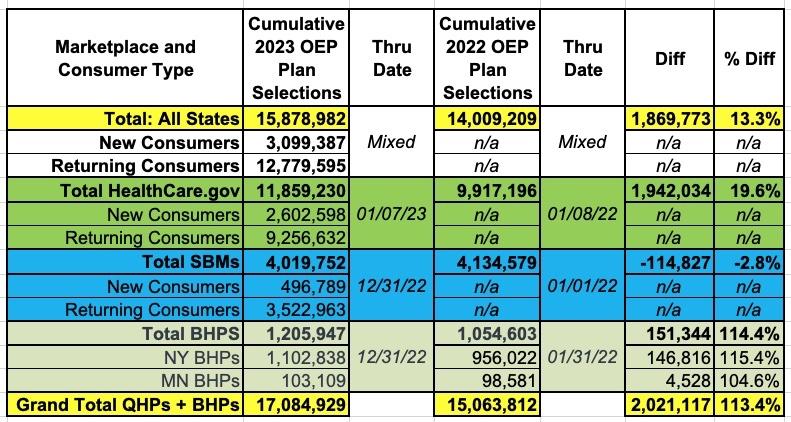 As I explained, the bulk of this gap is actually due to all twelve remaining non-Medicaid expansion states also being hosted on the federal exchange (South Dakota recently voted to expand Medicaid but it doesn't go into effect until this summer). Since this includes four of the largest states in the country (TX, FL, NC & GA), it's not surprising that the massive enrollment spike in FFM states is dramatically skewing these results.

However, as I also went on to note, even if you only include expansion states hosted on the federal exchange, there's still a dramatic difference in year over year enrollment. SBMs are, again, down 2.8% year over year, while FFMs which have expanded Medicaid are still up 10.3%:

There's one other important factor I forgot to account for, however, which I need to do in order to make this a fair, apples-to-apples comparison: Basic Health Plans.

Only two states have BHP programs in place: Minnesota and New York. Since BHPs are only available to those earning between 138 - 200% of the Federal Poverty Level, this means that the BHP programs are effectively cannibalizing enrollees who would otherwise be signing up for highly-subsidized ACA exchange Qualified Health Plans (QHPs). And given that BHP enrollment is either equal to (in Minnesota) or over five times higher than (in New York) QHP enrollment, this has a pretty dramatic impact. Furthermore, BHP enrollment in New York is up 15.3% in New York and up 4.6% in Minnesota this year compared to roughly the same point last year.

With this in mind, I've run the numbers again, this time comparing SBM states, including BHP enrollment, to HC.gov expansion states only, which gives me the following table. I've noted that BHPs are included for NY & MN, and have also listed some of the more noteworthy state-specific ACA policies. There may be others which I've forgotten to list, but this should be the bulk of them: 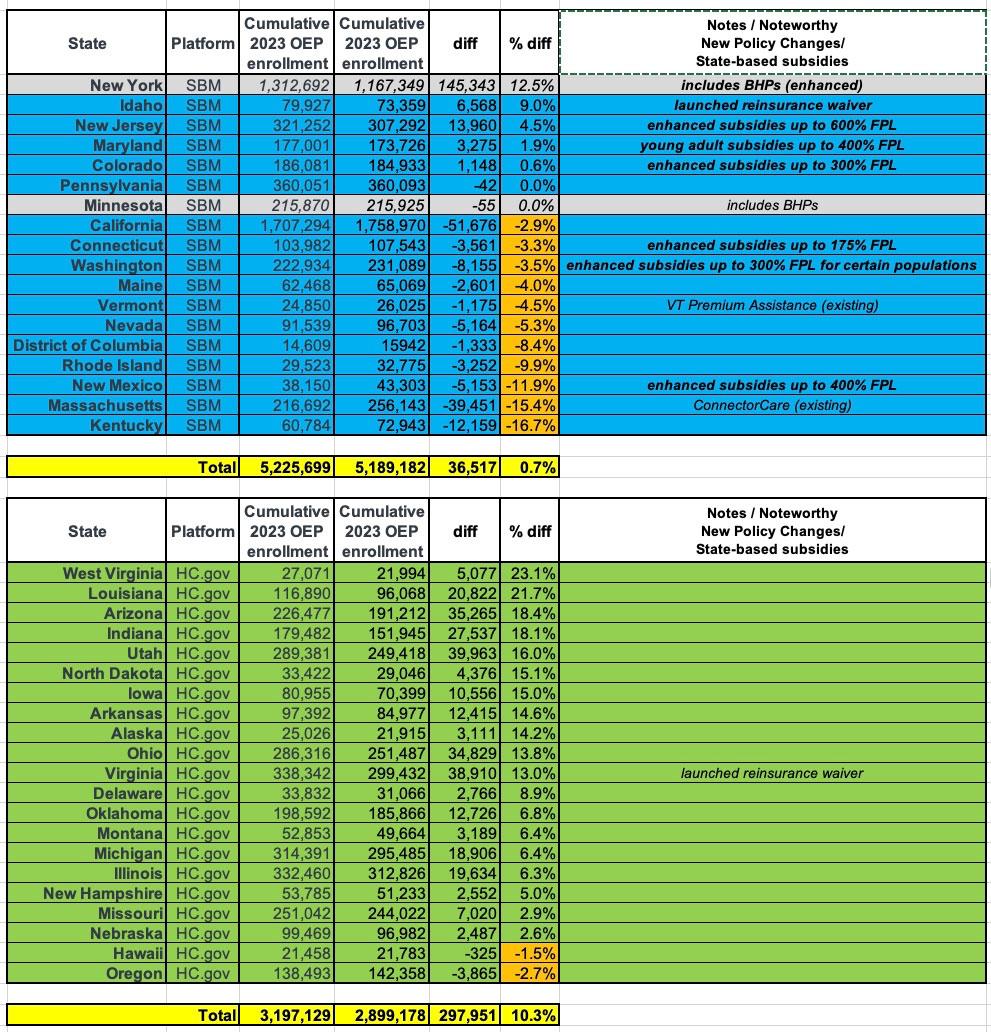 As you can see, once BHPs are added to the totals, the gap is less dramatic--SBM enrollment is actually up 0.7% vs. last year. However, there's still a 10-point gap between SBMs and expansion FFMs. In order to match the latter's 10.3% increase, enrollment across the 18 SBM states would have had to be nearly 500,000 higher than it actually is at the moment.

Instead, only two states (New York, including BHPs) and Idaho (which launched a new reinsurance waiver program this year) are in the +10 point ballpark. Of the other 16 SBM states, 11 of them are not only down vs. last year, they're down by more than the worst-performing expansion FFM state (Oregon).

The other head-scratcher here is that, as shown in the notes column, many of the SBM states have launched their own supplemental state-based premium or cost sharing subsidies, and while some of those programs aren't new, several of them are (or have been newly enhanced starting in 2023). Normally you would think that this would boost enrollment in those states, yet several of the ones which have expanded financial assistance this year (New Mexico in particular, along with Washington State and Connecticut) have seen drops vs. the same point a year earlier. Huh.

I'm genuinely perplexed by what's going on in Kentucky, Massachusetts (which led in enrollment growth for many years in a row) and, again, New Mexico.

It's important to note that there's still anywhere from 15 - 31 days of enrollment data missing from all 18 SBMs (as well as 8 days missing from the FFM states); it's certainly possible that some of these states will see a last minute enrollment surge which closes the gap somewhat. That won't be known for certain until the dust settles in all 50 states + DC on January 31st.

The table below shows actual, official OEP enrollment including BHP enrollees in both FFM & SBM states for every year since 2014. For 2023 I'm using my projected final 2023 OEP QHP + BHP numbers, which should be perhaps ~3% higher nationally than the hard numbers reported yesterday. I've also listed the states which have shifted between FFM & SBM status, which complicates proper year-over-year comparisons a bit...except that there were no changes in FFM/SBM status between 2022 and 2023.

Obviously as the trend of states moving to SBMs continues (Virginia is launching their SBM next year; it's my understanding that Oregon is planning on making the move soon; and a bill was introduced last year in my home state of Michigan with bipartisan support to do so as well), overall SBM enrollment will increase at the expense of FFM enrollment...but it's interesting to see what appears to be a sort of plateau happening among the current SBM states, at least for the moment: 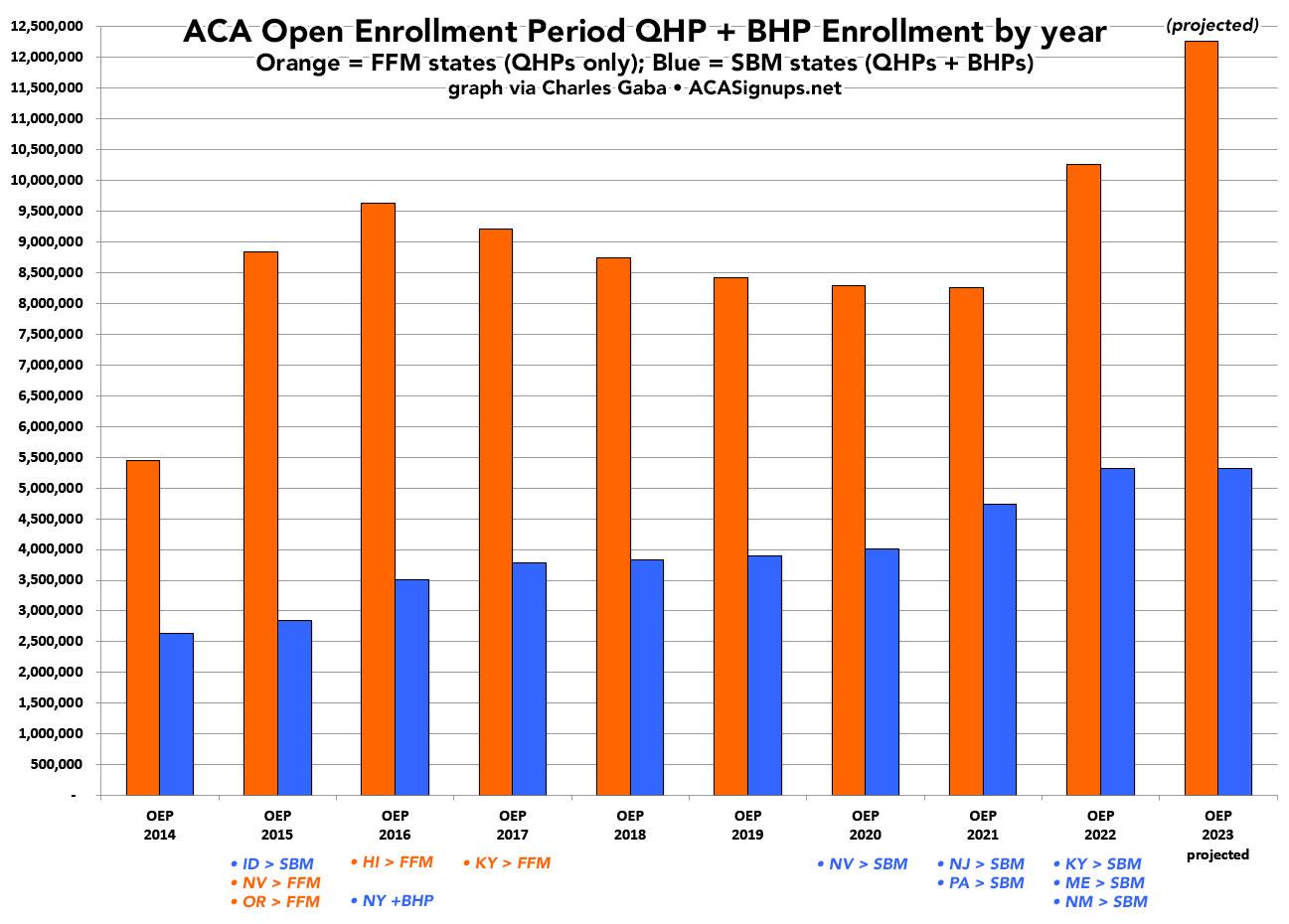