PEO-Eww: Something's Rotten in the District of Columbia

There's perhaps no other population center in the United States more Democratic-leaning than the heart of our nation's capital, the District of Columbia. In 2020, DC voted for President Biden by a whopping 88 points, giving him 93% of the vote. Every DC Mayor has been a Democrat since before DC even had a mayor (in 1967 DC's government was reorganized), and 11 of the District's 13 Councilmembers are Democrats...with the other two being listed as Independents.

You'd assume that DC's governing body would be a staunch supporter of both the letter and spirit of the Affordable Care Act, and for the most part you'd be correct.

And yet, somehow, in this liberal bastion, there's a decidedly anti-Patient Protection, anti-Affordable Care bill which has somehow managed to work its way into the Council's legislative proceedings.

I was informed last week of B24-0305, aka the "Professional Employer Organization (PEO) Registration Act of 2021," which, if passed and implemented, would create a carveout allowing PEOs to be exempt from ACA consumer protections.

OK, first up: What's a PEO? Here's an explainer from the Society for Human Resource Management:

A professional employer organization (PEO) is an organization that enters into a joint-employment relationship with an employer by leasing employees to the employer, thereby allowing the PEO to share and manage many employee-related responsibilities and liabilities. This allows employers to outsource their human resource functions, such as employee benefits, compensation and payroll administration, workers' compensation, and employment taxes.

PEOs typically serve as a professional employer of their clients' employees. The client company reports its wages under the PEO's federal employer identification number (FEIN), and employee liability shifts to the PEO. Employers gain economies of scale by having more benefits options, sometimes at lower rates.

Yes, that's right: This is an attempt to bypass ACA rules for an industry which employs over 4 million people nationally (I don't know how many in DC specifically).

From the text of the bill itself:

(a) A PEO providing health insurance coverage in the District shall only offer health benefit plans issued by insurers, hospital and medical services corporations, or health maintenance organizations entities that are licensed in the District, and use the forms and rates approved by the Commissioner.

(b) A fully insured health benefit plan offered to a covered employee of a PEO shall be considered a large group plan subject to District laws .

(c) A health benefit plan offered to a covered employee of a PEO that is not fully-insured shall be considered a multiple employer welfare arrangement subject to the Health Insurance Portability and Accountability Federal Law Conformity and No-Fault Motor Vehicle Insurance Act of 1998, effective April 13, 1999 (D.C. Law 12-209; D.C. Official Code § 31-3301.01 et seq.).

(d) A PEO that sponsors a fully insured health benefits plan for covered employees of the PEO and is registered under this act shall not be deemed to be engaging in the sale of insurance.

So what does that all mean? Well, it's not pretty.

Here's an explainer from the DC Health Benefit Exchange Authority of the dangers this would pose to both employees and small businesses in the DC jurisdiction:

The draft for markup of B24-0305 eliminates vital ACA health insurance consumer protections and overrides laws that protect employers and their workers. HBX raised these concerns in 2020 when this bill was introduced as B23-0885 and HBX testified at the March 2022 hearing in opposition to B24-0305. The Executive provided amendments to B24-0305 that were unanimously agreed to by HBX, DISB, and DOES. The markup draft does not include HBX amendments.

The draft as written, B24-0305 exempts PEOs from the District’s ACA protections. If B24-0305 becomes law, District small businesses and their workers will lose ACA and District consumer protections.

Language in the bill that does this: Section 4(b) A fully insured health benefit plan offered to a covered employee of a PEO shall be considered a large group plan subject to District laws. (emphasis added)

Language in the bill that does this: Section 4(b).

District policymakers have a history of enacting laws that protect DC’s residents and businesses to ensure a stable and competitive health insurance marketplace. This bill directly undermines those protections by exempting PEO coverage from these essential protections. Examples of such actions include:

The explainer also includes a table which lists the specific ACA protections which apply to small group plans which don't apply to large group plans: 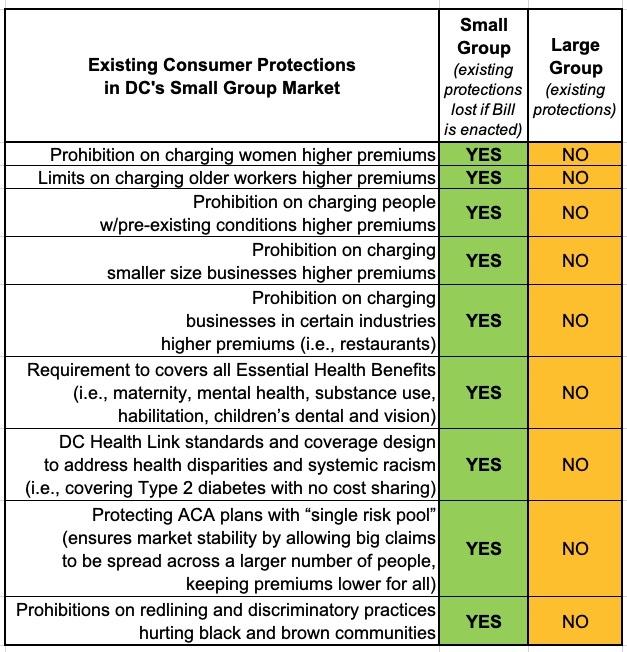 Chairman Gray and Members of the Committee on Health:

The undersigned organizations represent millions of individuals facing serious, acute and chronic health conditions across the country. Our organizations have a unique perspective on what patients need to prevent disease, cure illness and manage chronic health conditions. The diversity of our groups and the patients and consumers we represent enables us to draw upon a wealth of knowledge and expertise and serve as an invaluable resource regarding any decisions affecting state health insurance marketplaces and the patients that they serve. Based on this our organizations strongly oppose this legislation.

Our organizations believe that everyone should have quality and affordable healthcare coverage. Exempting a group of employers – including Professional Employment Organizations, as B24-0305 does – from these protections would not provide consumers with the coverage that they need to stay healthy and would be particularly harmful for patients with pre-existing conditions like asthma, COPD, cancer and heart disease.

If exempted from small group requirements, PEOs would not be required to provide the same robust benefits as health insurance plans in the exchange are required to cover, such as the ten essential health benefits including prescription medications and hospitalizations. Patients with lung disease, cancer and heart disease have unique health needs. Comprehensive coverage is vital for all of the patients we represent, and they need to have access to the medications, treatments, and specialists they require to manage their conditions and stay healthy.

This legislation would allow PEOs to discriminate against certain populations, including women or employees of certain industries, by charging them higher rates simply because of their health status. Additionally, plans offered by PEOs would not have to maintain basic network adequacy standards, which could result in patients not being able to get the care they need.

We understand the challenges small businesses and self-employed people have in finding affordable healthcare coverage but exempting a subset of employers such as PEOs will not result in more people with healthcare that is affordable, adequate, and accessible.

We fear that B24-0305 could result in more segmentation of the marketplace. PEOs could cherry-pick certain businesses with healthier employees, driving up premiums in the marketplace.

There is a history of PEOs collecting health insurance premiums and not paying claims, collecting workers’ comp premiums and not buying insurance, and collecting payroll taxes and not paying the IRS. Exempting PEOs from state oversight and enforcement provisions increases the risks of scams and fraud. This is not what our District residents need right now. This is especially true in light of the COVID-19 pandemic, which has highlighted the critical importance of adequate, accessible and affordable healthcare.

Similar plans also have a history of fraud and insolvency. If this continues, patients could pay their premiums but still not have the coverage they were promised when they get sick. This could leave patients with cancer, heart disease, and other expensive illnesses with massive medical bills or force them to forgo needed treatment.

Our organizations are committed to working with you to expand access to quality and affordable health coverage but exempting Professional Employment Organizations from being required to offer ACA compliant plans is not the right solution. As the Council has always made difficult decisions with the best interest of the health of district residents at the forefront, we respectfully ask the Committee on Health to vote NO on B24- 0305 and continue to protect district residents.

So, how did this bill manage to make it this far? Well, it's sponsored by three of the DC Council members: Health Committee Chair Vincent Gray, Christina Henderson and Charles Allen. There was originally a fourth cosponsor as well, Brianne Nadeau, but she removed her name from the bill over a year ago (the original legislation apparently was sold as simply requiring PEOs to register with the District; she pulled her name from it when she learned that part of the bill would include stripping ACA protection requirements for PEOs).

It would be very interesting to find out what commissioners Gray, Henderson and Allen's rationale is for sponsoring a bill which, from all evidence, would severely undermine the heart of the ACA's patient protections for thousands of DC residents.