President Biden claimed the pandemic is "over" even though we still have "problems" with COVID. That was...a mistake. 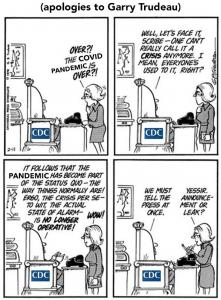 Last night President Biden raised a lot of eyebrows during a 60 Minutes segment in which he was being interviewed while walking through the Detroit Auto Show:

President Biden: "The pandemic is over...we still have a problem with COVID...we're still doing a lot of work on it...but the pandemic is over...If you notice, no one's wearing masks; everyone seems to be in pretty good shape...and so I think it's changing, and I think this is a perfect example of it."

Then, today, HHS Secretary Xavier Becerra, who I had hoped would try to walk back and/or clarify the President's statement, instead doubled down on it:

U.S. Health Sec. Xavier Becerra supported a surprise comment over the weekend from President Joe Biden, who declared the pandemic over.

"He's made it clear that Americans are still dying in the hundreds every day from COVID, and so we have to stay at this. The vaccines are the most effective way for us to stay protected," Becerra added.

Biden's comments took senior officials by surprise, according to the Washington Post.

And whether or not public health emergency needs are over is something the administration is still weighing, Becerra said.

"I think the president was reflecting what so many Americans are thinking and feeling," Becerra said, noting that with effective vaccines, tests, and treatments, the country is on a better path than earlier in the pandemic.

"I believe the president made it very clear — COVID is still here. We just have to make sure we're smart," he added.

Look, yes, things are certainly far better than they were, and yes, the new treatments and bivalent booster vaccines should make things even better, and yes, pretty much every school, business, restaurant, etc. has now been open for some time, etc etc etc.

And if President Biden had simply said that, it would have been fine.

HOWEVER, pandemic has a definition:

1: occurring over a wide geographic area (such as multiple countries or continents) and typically affecting a significant proportion of the population

Hell, I just got over a case of it last month, and my own son just recovered from COVID last week...and both of us are fully vaxxed/boosted and still wear masks at indoor public events.

OK, so who gets to "decide" when the pandemic is actually "over?"

I've read that technically it's the World Health Organization gets to call it--which makes sense, given that they're the World Health Organization, and a pandemic (as opposed to an epidemic) generally means that the disease in question has spread across multiple nations and/or continents. Even if cases in the United States dropped off to zero, the pandemic still wouldn't be "over" if it was still raging in multiple other nations/continents.

I also found this piece from the Columbia School of Public Health from last year:

WHAT IS AN EPIDEMIC?

The Centers for Disease Control and Prevention (CDC) describes an epidemic as an unexpected increase in the number of disease cases in a specific geographical area. Yellow fever, smallpox, measles, and polio are prime examples of epidemics. An epidemic disease doesn't necessarily have to be contagious. West Nile fever and the rapid increase in obesity rates are also considered epidemics. Epidemics can refer to a disease or other specific health-related behavior (e.g., smoking) with rates that are clearly above the expected occurrence in a community or region.

WHAT IS A PANDEMIC?

The World Health Organization (WHO) declares a pandemic when a disease’s growth is exponential. This means the growth rate skyrockets, and each day cases grow more than the day prior. In being declared a pandemic, the virus has nothing to do with virology, population immunity, or disease severity. It means a virus covers a wide area, affecting several countries and populations.

This makes it sound like as soon as the rate of growth slows to a crawl, the pandemic is over. By definition, that would mean that as soon as 100% of the entire global population is infected, there's no longer a pandemic. I mean, I suppose if the entire population of the planet were to die of COVID the pandemic would also then be over as well.

In other words, saying that the pandemic is "over" may (or may not?) technically be accurate from a strict epidemiological standpoint, but it isn't a terribly useful definition when you're also trying to convince the public to get vaccinated and boosted.

OK, so how about comparing the current COVID situation in the United States to, say, influenza?

Here's the estimated range and annual burden of influenza cases, hospitalizations and deaths in the U.S. over the past decade or so (pre-COVID) according to the Centers for Disease Control: 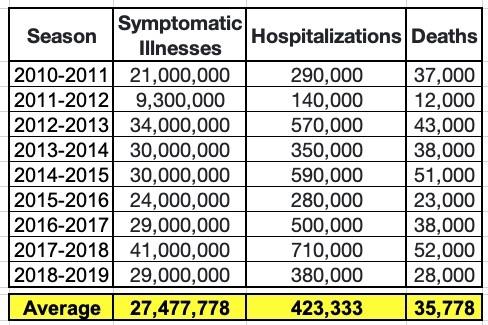 That breaks out to around 75,000 cases, 1,200 hospitalizations and 100 deaths per day (except that the flu tends to be very seasonal and thus more concentrated over a period of a few months each year).

We in the U.S. have never considered "standard" influenza to be an "epidemic" or a "pandemic," however; we just sort of...accept the idea that around 100 people will typically die of the flu each year.

Does that mean that if and when we ever manage to get COVID down to similar numbers that that's when we can declare the pandemic to be "over" (at least here in the United States)? 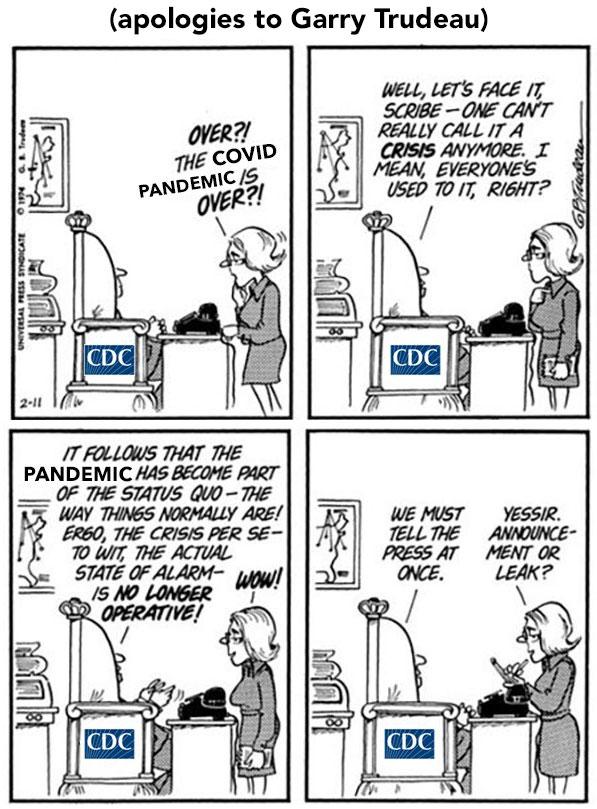 (note: the original version of this classic Doonesbury strip was published in 1974, referring to the then-ongoing energy crisis.)

Right now we're averaging around 60,000 new cases, 4,400 new hospitalizations and 400 new deaths per day. If you use the flu as your guideline, we seem to have hit that benchmark (at least for the moment) for cases, but hospitalizations are running 3.6x higher and deaths around 4.0x higher.

Even if we're able to force both of those numbers down to flu-like levels, however, there's still two other major factors to keep in mind: Long COVID...and new variants which may be more likely to escape the vaccines.

Dr. Peter Hotez, a global health expert and vaccinologist, told Yahoo Finance in a separate interview Monday that the president's comments may have been premature.

"There's very well likely another major new variant of concern out there. We got hit very hard with Alpha in January of 2021 and Omicron in January of 2022. We don't know what January 2023 is going to bring," said Hotez, dean of the National School of Tropical Medicine at Baylor College of Medicine.

The World Health Organization stopped short of declaring the pandemic over in recent weeks, emphasizing that an end is in sight as global vaccination rates increase.

But in declaring the pandemic over in casual commentary, the future of congressional funding for the pandemic — and the president's own emergency powers — are in question.

"I was hoping that the White House would issue a clarification today," Hotez said.

"The fact that the White House had ample time to clarify it, that says to me they are deliberately not trying to clarify that," he added.

It's been difficult enough getting certain segments of the population to even take their first COVID vaccination shots over the past year and a half, much less getting a 3rd or 4th booster shot on top of it...and now the Biden Administration is supposed to be pushing people to get the brand-new, just-authorized "bivalent" COVID-19 vaccine shots, which are supposed to be updated to be more effective against the more recent COVID variants.

The President of the United States saying on national, prime-time television that the pandemic is "over," no matter how off-the-cuff it was intended or what it was "shorthand" for (as opposed to issuing a formal statement or address to the nation) almost certainly made the job of getting people to take the new booster shot a hell of a lot more difficult.

This also raises another important issue: The formal HHS Public Health Emergency declaration. Millions of people will be kicked off of Medicaid whenever the formal PHE expires, which is currently set to happen on October 15th.

By an amazing coincidence of timing, Sarah Lovenheim, the Assistant Secretary for Public Affairs at the HHS Dept., issued this statement earlier this afternoon:

The COVID Public Health Emergency remains in effect & HHS will provide a 60-day notice to states before any possible termination or expiration. As we’ve done previously, we’ll continue to lean on the science to determine the length of the PHE. Read FAQs:

In other words, the PHE will remain in effect until at least November 18th (60 days from today). The general assumption is that Sec. Becerra will formally extend it until at least January 15th sometime soon. Still, having the President say that the pandemic is "over" and the HHS Secretary saying that this statement was "correct" is gonna make a lot of people jump all over such an extension, regardless of the nuance or other complications involved.

People know that I'm a huge fan of the President in general, and for the most part I think he's done a stellar job, especially given the razor-thin margins in Congress he has to work with, among other limitations--but I think this was a mistake on his part. I just pray it doesn't come back to bite him (and thousands of other Americans) on the ass this winter.