via the Maryland Insurance Administration:

The rates for individual health insurance plans under the Affordable Care Act (ACA) will change/increase by an average of 6.6% this year. The approved rates are 4.4% lower on average than insurance carriers originally requested – a difference of more than $50 million in total annual premium savings for Maryland consumers.

Historically, medical premiums have increased at a faster pace than general inflation. With inflation averaging 8.3% in 2022 (as measured by the U.S. Bureau of Labor Statistics), a 6.6% premium increase is 1.7% below average.

Commissioner Birrane credited the ability to keep the rate below general inflation to the success of the innovative reinsurance program developed by the Hogan administration in 2018 to reduce and stabilize rates in the individual market. After experiencing several years of double digit rate increases that followed the implementation of the ACA, the reinsurance program was designed to bring rates down over 3 years and, thereafter, to align future rate increases with increases in claim and cost trends. The program has been successful and - even with the approved rates for 2023 - premiums in the Individual market have decreased by an average of over 25% since implementation. The Maryland reinsurance program is the largest in the country and has pushed Maryland rates to among the lowest in the country.

“The reinsurance program continues to do its job,” Commissioner Birrane said. “The 2023 rate changes are tied to increasing claim costs and projections as to what those costs are likely to be 2 in 2023, given claim cost trends. Inflation, increased unit costs for services, increased utilization, and the on-going uncertainty of COVID-related costs, are all significant factors influencing rates. Nonetheless, we have been able to keep rates below inflationary trends thanks to the reinsurance program.”

Maryland’s 1332 State Innovation Waiver was the result of a bipartisan legislative effort led by the Hogan administration and the Maryland General Assembly in 2018. The waiver was approved by the U.S. Centers for Medicare and Medicaid Services in August 2018, clearing the way for the implementation of the reinsurance program in 2019. The flexibility provided by the waiver allowed Commissioner Birrane to modify the parameters of the reinsurance program in 2023, allowing the state to remove more liability from the carriers and reduce the necessary rate increase. Absent that flexibility, the average rate increase in the individual market would have been closer to 8%.

Nationwide, carriers have asked for an average rate increase of 10%* in the individual ACA market in the states where rate requests have been made public.

*(Note: This is actually outdated; the actual average preliminary rate increase nationally is 7.7% across the 37 states which have public data available.)

States are beginning to announce final approved unsubsidized premium rates. The MIA noted that rate changes in the individual market are influenced by whether a state has adopted a reinsurance program similar to Maryland’s and, if so, when the program was implemented. For example, two states, Idaho and Virginia, which have newly approved 1332 programs and are just beginning their reinsurance programs, are seeing rate decreases. These rate decreases should be compared to the 2019 rate decreases from year 1 of the Maryland program, as shown on Exhibit 1.

About 232,000 Marylanders are affected by the approved rates. The actual percentage by which the rates for a specific plan will change depends on the carrier and plan. As an example, for a 40-year-old living in the Baltimore metro region, rate changes for the lowest cost off-exchange silver plans range from 2.7% to 13.3%, with average monthly differences ranging from $7 per month to $60 per month.

Maryland's insurance dept. also posted the final 2023 small group market rate changes, which have also been reduced somewhat (from +10.0% to +7.6%): 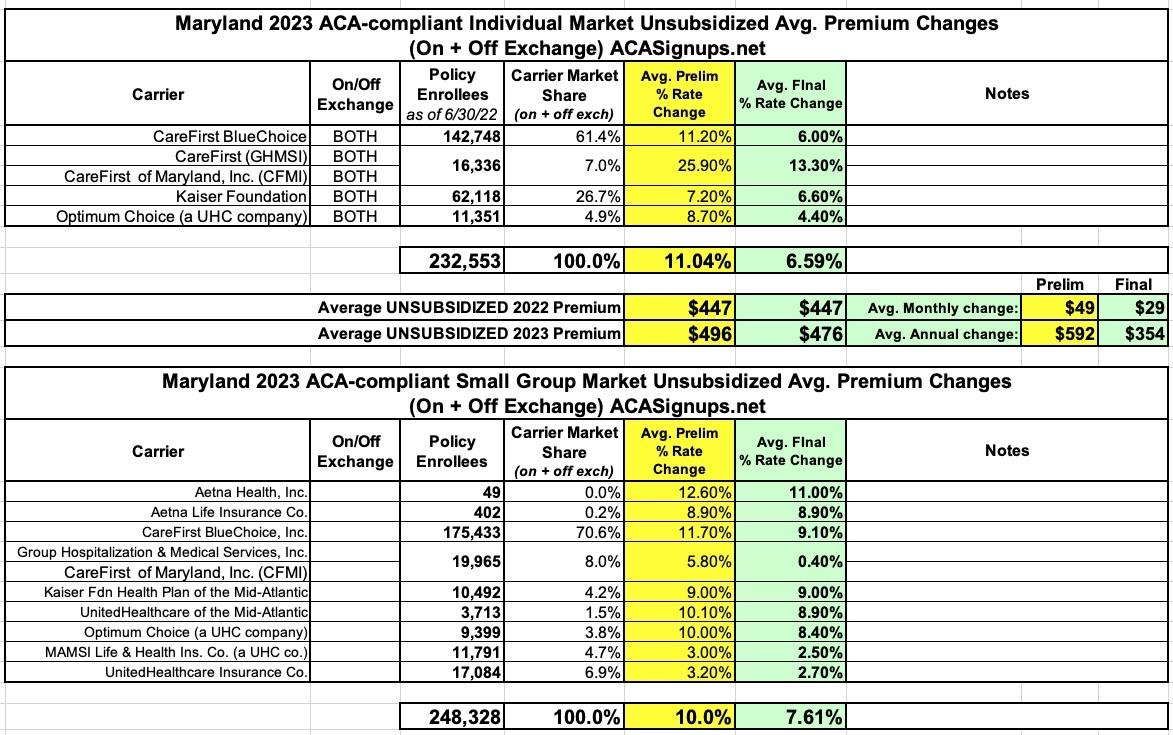