UPDATE: There Will Be Lawyers: Gov. Kemp challenges HHS on his right to kill HC.gov in Georgia

Back in April, I did some minor champagne cork popping after the Centers for Medicare & Medicaid Services rightly put the kibosh on the so-called "Georgia Access Model" waiver pushed by GOP Governor Brian Kemp:

There's not a single part of the paragraph above which shouldn't be setting off major alarms:

It's important to note that this proposal wouldn't simply move Georgia from HealthCare.Gov over to a state-based ACA exchange the way that 18 other states already have; those are basically just state versions of the federal website. Health insurance policies sold on them are still required to be ACA compliant, and ACA subsidies are still restricted to enrollees in those policies, as they should be.

What Georgia's waiver would do is something very different which would completely undermine many of the primary reasons the Patient Protection & Affordable Care Act was passed in the first place.

Five months later I was pleased to report that the Centers for Medicare & Medicaid Services (CMS) did the right thing:

NEW: Fed'l govt. suspends Gov. Kemp's plan to separate GA from HealthCare.Gov with no replacement. CMS points to expected coverage losses for Georgians. GA has 90 days to submit a corrective plan but this may be the beginning of the end... #gapol

...Commenters also asserted that Georgia’s initial assumptions in its waiver application are now incorrect given the major changes that have impacted the baseline. For example, one commenter noted that monthly QHP effectuations for 2022 will be at least 140,000 people higher than Georgia assumed it would be, perhaps as much as 200,000 higher due to the COVID-19 SEP and the enhanced subsidies under the ARP.36 Additionally, these commenters noted that the changes have impacted the baseline such that as of December 15, 2021, nearly 654,000 Georgians selected Marketplace plans, 37 exceeding Georgia’s target enrollment for the Georgia Access Model by 261,000 people.

Commenters noted that changes in law (e.g., ARP), policy (e.g., increased outreach, the COVID19 SEPs), and other circumstances (e.g., regulations such as the extended 2022 OEP, and the new SEP opportunity for those at or below 150 percent FPL) increased enrollment, thereby impacting the State’s initial baseline analysis and projections for the Georgia Access Model.

Unfortunately, as I warned at the time:

In accordance with STC 17, Georgia will have 90 days from the receipt of this notice to respond with a written challenge to the Departments’ current determinations or to submit a corrective action plan, consistent with the process discussed below.

Well, "90 days from the receipt of this notice" happens to be July 28, 2022...and sure enough, look what Gov. Kemp's office sent to CMS Administrator Chiquita Brooks-LaSure yesterday, just 24 hours before the deadline:

This letter is in response to your letter dated April 29, 2022, in which the U.S. Department of Health and Human Services (HHS) and U.S. Department of Treasury (collectively, “the Departments”), stated that they would suspend implementation of Part II of Georgia Access unless Georgia submitted either a corrective action plan or a written challenge to the Departments’ determinations prior to July 28, 2022. This letter is Georgia’s written challenge.

The letter itself is 9 pages long; I'm not going to repost the whole thing here, of course, but it's important to note that nowhere in the letter does Kemp's office attempt to actually modify or correct the waiver request...they simply claim that a) Georgia doesn't have to comply with CMS's additional information request and b) the existing waiver request supposedly complies with the requirements as it is.

The first reason gets into a whole bunch of wonky legalese which I'm not equipped to discuss, but I'm pretty sure that CMS wouldn't have demanded the additional actuarial information if they didn't think they were legally entitled to do so.

As for the second reason, Kemp's office starts by basically saying "No Backsies!"...that because the waiver had already been approved by the Trump Administration, it's too late for the Biden Administration to pull the plug:

...the Departments have no authority to reopen, reconsider, or suspend an approved waiver before it goes into effect. The STCs and regulations contemplate the Departments monitoring the waiver’s compliance with the statutory guardrails once the waiver is implemented.

...then they claim that CMS's actuarial analysis is flawed and biased:

...The Departments claim that Part II of Georgia Access no longer complies with the statutory coverage guardrail because of “[1] changes in relative levels of advertising and [2] attrition due to the change in enrollment pathways (absence of HealthCare.gov).” See Suspension Letter pg. 8. The entire basis for that conclusion, however, comes from a brief analysis done by the Departments’ handpicked consultant, Acumen LLC.

Kemp claims that replacing HealthCare.Gov with a variety of private, profit-based insurance carrier websites is exactly the same as states which replace HealthCare.Gov with their own nonprofit, government-run, state-based ACA exchanges (which are required to list all ACA-compliant offerings in a true apples-to-apples fashion, and which aren't allowed to list non-ACA compliant "junk" plans). This is, to put it mildly, nonsense:

...Acumen’s analysis of transition attrition is particularly puzzling. Acumen claims that “[t]he removal of the HealthCare.gov platform as the enrollment channel in Georgia is ... likely to impact total non-group enrollment.” See Acumen Analysis pg. 8. But it was always going to be the case that Georgia would transition away from HeathCare.gov under Part II of Georgia Access; that was a primary point for approving the waiver in the first place. And the transition from the federal exchange to the Georgia Access Model is no different than the six states (Kentucky, Maine, Nevada, New Jersey, New Mexico, and Pennsylvania) that have recently transitioned from the federal exchange to a state-based exchange.

As my colleague David Anderson notes, all of this presumably boils down to a court battle; There Will Be Lawyers indeed.

In the meantime, I'd be willing to bet that every one of the eleven different health insurance carriers offering ACA policies in Georgia in 2023 have contracted with a service like Health Sherpa or Sotheon (disclosure: both of whom advertise on this site) to set up some sort of "White Label" Enhanced Direct Enrollment portal just in case Kemp ends up winning this battle.

It's also quite possible that the expense of contracts like that are behind some of the 11.8% average rate increases being requested by Georgia carriers is due to carriers assuming the "Access Model" will go through. For instance, here's UnitedHealthcare, which just raised their original 20.26% rate hike request to 23.89%:

Other carriers are all over the place. Ambetter, which has by far the largest marketshare, seems to be assuming the Access Model won't go through, meaning they'd stay on the federal exchange: 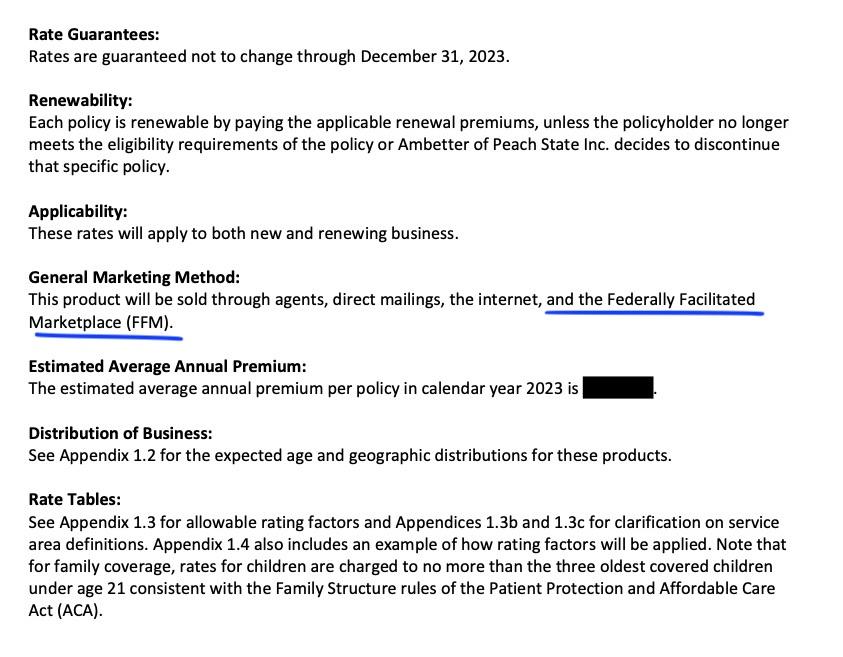 ...while Alliant Health Plan, with 5.8% of Georgia's individual market, seems to assume it will be in place: 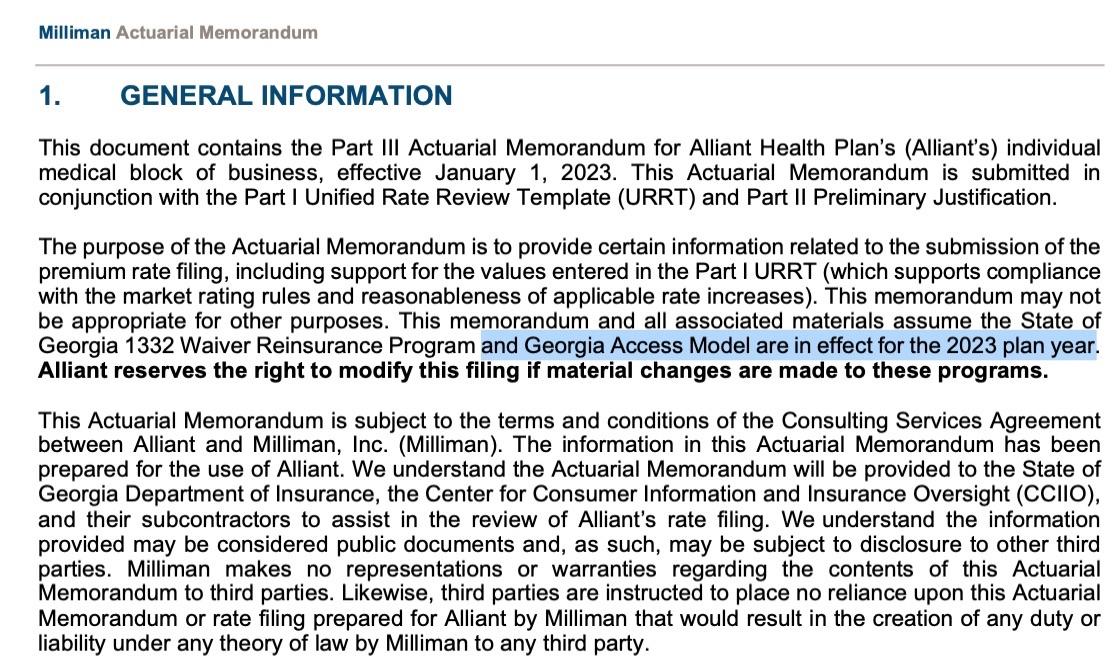 Then there's Bright Health Plans, which I can't quite figure out (not sure if "Georgia Exchange" means the federal exchange or if it's their name for an "Access Model" created platform):

In other words, it seems to be a bit of a mess right now.

Today's July 28th. The contracts between CMS and the insurance carriers for HealthCare.Gov participation have to be signed in late September, and the 2023 Open Enrollment Period launches on November 1st, so the clock is ticking...and none of this has anything to do with whether or not the American Rescue Plan's expanded ACA subsidies are finally extended or not...