Manchin Van Pelt yanks (most of) the football away...again (updated) 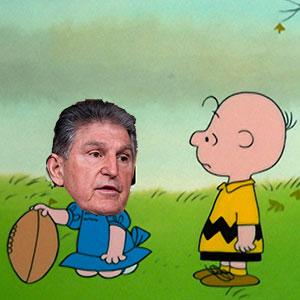 WASHINGTON — Sen. Joe Manchin, D-W.Va., and his staff told Democratic leadership on Thursday that he's not willing to support major climate and tax provisions in a sweeping Biden agenda bill, according to a Democrat briefed on the conversations.

Instead, Manchin, a key centrist who holds the swing vote in the 50-50 Senate, said he is willing to back only a filibuster-proof economic bill with drug pricing and a two-year extension of funding under the Affordable Care Act, the source said.

Manchin "was explicit that he will not support a bill in August" with energy or climate provisions or one "closing tax loopholes exploited by the wealthiest" and large corporations, "despite his support for those specific things throughout the entire negotiation," said the Democrat briefed about the discussions.

Democrats hope to pass a bill before September to prevent major insurance premium hikes under the Affordable Care Act, which could be difficult to avert if they don't act quickly.

Here's the thing: Not only did Manchin previously "support" those specific things earlier this year, he passionately demanded that they had to be included, specifically to fight inflation:

truly wild listening to this Manchin interview from Feb. (start at 3:40 mark).

Manchin argues forcefully, with extensive detail, that we need to raise taxes on corporations & the ultra-wealthy *in order to combat inflation* https://t.co/vXu0pVy5Dc

Oh, but wait, it gets better: The "two-year extension" of the American Rescue Plan's enhanced subsidies? That's not only shorter than the three year extension included in the Build Back Better bill which Manchin shot down last winter, take a look at what his biggest beef with the larger package was at the time:

Manchin once again said this week that the Build Back Better Act is “dead,” referring to the $2 trillion-plus bill that passed the House. A nonnegotiable red line for him is that all new programs must be permanent and fully financed.

That's right: Six months ago he insisted that one of his major problems with the BBB bill was that several of the provisions, including the enhanced ARP subsidies, were only included for a few years, and that they had to be made permanent within the bill (which I obviously support doing!).

Hell, he even agreed to have the Congressional Budget Office do a special 10-year score of how much the BBB bill would cost if all of the short-term provisions were made permanent (FWIW, the ARP subsidies were projected to cost $220 billion for ten years vs. $74 billion for three years).

In short, Sen. Manchin either doesn't have the slightest idea what he actually wants or he's been jerking everyone around for a solid year for no reason other than to keep his face in the news. He could have set his conditions clearly last summer if he wanted to, but instead he's forced the rest of the Democratic Party and President Biden to kiss his ass every day in the hopes that he might possibly agree to do something useful.

The thing is, he has all the cards at the moment, and he knows it. With a 50/50 Senate, not a single Republican willing to vote for any such bill, and Vice-President Harris only able to act as a tie-breaker, Manchin's vote is needed for any reconciliation bill to get through.

Senate Majority Leader Chuck Schumer and Speaker of the House Nancy Pelosi can either take this "offer" (such as it is, assuming it doesn't change by the time I publish this blog entry)...or they can get nothing at all, in which case ARP subsidies expire at the end of 2022 and up to 13 million Americans face massive health insurance premium hikes...with the notices of those increases showing up just a week before the midterm election.