via the Oregon Division of Financial Regulation:

Salem – Oregon consumers can get a first look at requested rates for 2023 individual and small group health insurance plans, the Oregon Department of Consumer and Business Services announced today.

Oregonians will also see an uptick in premiums due to the expiration of temporary enhanced subsidies for on exchange individual market plans. The additional premium support has helped to lower monthly premiums by an average of 46 percent since enactment in 2021. Under the enhanced subsidy structure, people between 151 percent and 200 percent of the federal poverty level can get a bronze plan for as low as $1 per month, with other plans varying in costs. The loss of subsidies will equate to an approximate $11.9 million increase every month for Oregonians.

Health insurance companies submitted rate requests to the department's Division of Financial Regulation on May 16. The requested rates are for plans that comply with the Affordable Care Act for small businesses and individuals who buy their own coverage rather than getting it through an employer. Every county has at least four companies available for people to buy insurance on the individual market.

Over the next two months, the division will analyze the requested rates to ensure they adequately cover Oregonians' health care costs. The division must review and approve rates before they are charged to policyholders.

“Oregon continues to have a strong and competitive insurance marketplace, with four carriers offering plans statewide and Oregonians in most our counties having five or six companies to choose from, " said Insurance Commissioner and DCBS Director Andrew Stolfi. “The Oregon Reinsurance Program continues to allow Oregonians to find reasonable rates."

The Oregon Reinsurance Program continues to help stabilize the market and lower rates. Reinsurance lowered rates by 6 percent for the fifth straight year.

Virtual public hearings about the 2023 health insurance rates will be held July 27-28. A web address to watch the public hearings will be posted at oregonhealthrates.org. At the hearings, each insurance company will provide a brief presentation about its rate requests, answer questions from the division, and hear public comment from Oregonians.

“We look forward to a thorough public review of these filings as we work to establish next year's health insurance rates." Stolfi said. “We encourage all Oregonians to join us for the virtual public hearings and provide feedback on their health insurance plans."

Oregonians are encouraged to comment on rate change requests during the public comment period, which opens later this month and runs through July 7. The public can submit comments at oregonhealthrates.org and during the public rate hearings.

Preliminary decisions are expected to be announced in early July, and final decisions will be made in early August after public hearings and comment periods end.

According to the official SERFF rate filing forms, the weighted average increases should be 7.0% and 7.3% respectively, but there's any number of factors which could account for the discrepancy. One noteworthy item: Cigna Health just jumped into Oregon's small group market in 2022, but it looks like they're jumping right back out again in 2023...at least, they don't seem to have submitted any 2023 rate filings, anyway. Huh. 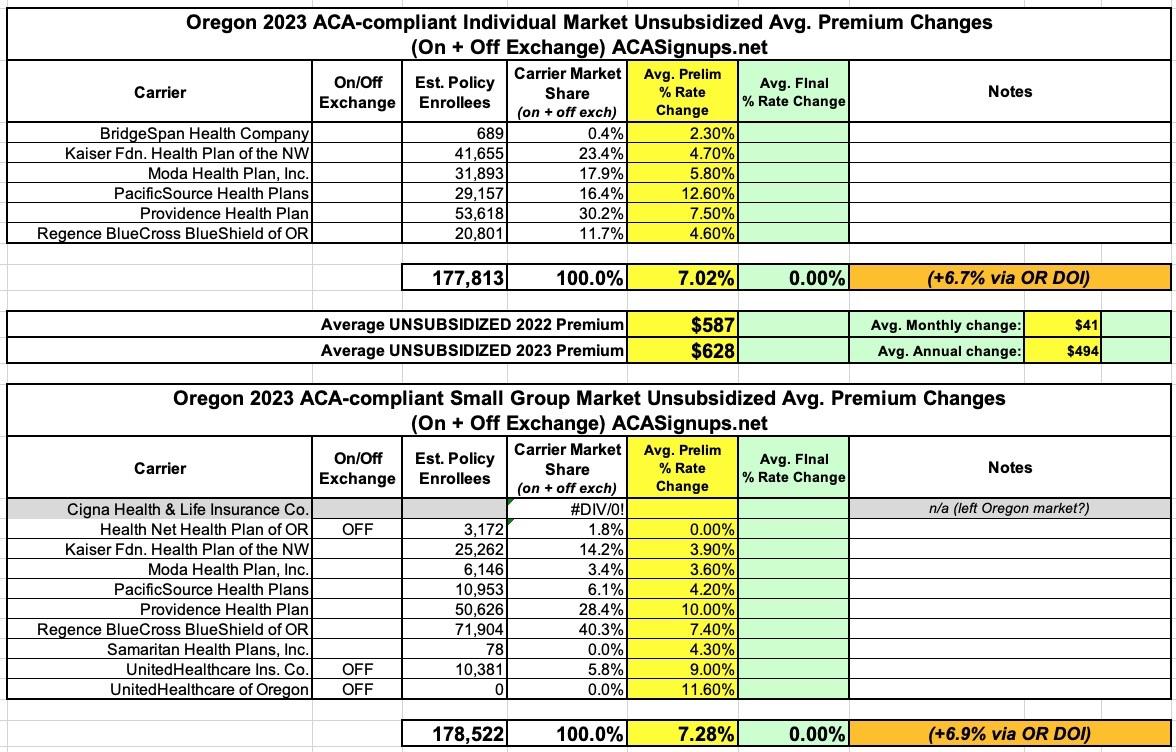