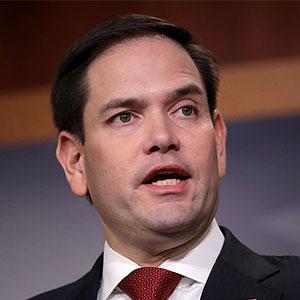 First of all, guess who's proudly claiming responsibility for helping destroy over a dozen businesses and kicking hundreds of thousands of people off of "the plan they like"? Marco Rubio.

ObamaCare is on life support and we have one senator who we can thank for planning years ahead a way to cripple the fraudulent program: Marco Rubio.

In 2013, Joshua Green, a liberal, recognized the role Marco Rubio played in his so-called “devious plan to kill Obamacare”:

Republican Senator Marco Rubio of Florida will introduce a bill today that represents a new and potentially crippling line of attack against the Affordable Care Act, aka Obamacare.

...Rubio’s bill takes a new tack by seeking to abolish “risk corridors,” one of several mechanisms in the law meant to hold down premium costs and entice insurers to participate in the exchanges by ensuring they won’t lose a lot of money if they draw a costlier applicant pool than anticipated. Risk corridors function like Major League Baseball profit-sharing: Insurers who wind up with unexpectedly healthy applicants and lower costs will “pay in” money to the government, which in turn “pays out” to insurers with costlier applicants, thereby stabilizing the nascent market. (snip)

...Once Republicans took over Congress Rubio’s bill passed into law. There would be no bailouts of health insurers. There would be no bailouts for health insurers. Rubio predicted the problems years before others (as he has with all the foreign policy crises) and figured out a way to deal with them. He laid out his plans in his op-ed in the Wall Street Journal years ago.

And how many people are we talking about here?

This fall, more than a dozen health insurers representing 800,000 people have dropped out of the ObamaCare exchanges, many out of fear that the administration no longer has the cash to cushion their losses in the costly early years of the marketplace.

The nation’s largest insurer, UnitedHealthCare, specifically mentioned the specter of a funding shortfall last week when it threatened to end its participation in the exchanges after 2016.

The angst in the industry centers on an obscure program in the healthcare law known as “risk corridors” that was designed to shield insurers against losses.

Rubio in 2013 went on the warpath against the program, decrying it as a “taxpayer bailout.” He penned op-eds against it, testified about it as the star witness at a House Oversight Committee hearing and even made his case to top House Republicans including then-Speaker John Boehner (R-Ohio).

OK, so Marco Rubio--the same genius who, while a Florida State Representative, pushed through a completely useless, waste-of-taxpayer-money boondoggle called "Florida Health Choices"--is absolutely gleeful about helping put several hundred people out of work across a dozen states and simultaneously throwing hundreds of thousands of people (as well as dozens of healthcare providers) into a panic as they scramble to replace their coverage on only a couple month's notice.

I'm sure he's proud of himself for this.

Now, I should reiterate, as I already noted, the ACA's Co-Op program already had a lot of barricades thrown in front of it before the risk corridor debacle took place, one of which was actually implemented by the Obama administration itself. Some of them may very well have failed this year even if they had received the full 100% loss reimbursement they were entitled to. Others might have only limped along for another season before still collapsing, depending on how 2016 played out. However, there were at least a few of them (the one in Colorado comes to mind) which were already turning things around and could have been successful if they hadn't been cut off at the knees after being operational for less than 2 years. And while those other barriers may have contributed to the problem, 12 of the 13 Co-Op failures have pinned a significant portion (if not all of it) on losing the Risk Corridor payments that they were entitled to (the first one to fail, CoOportunity, fell apart a year ago, before the risk corridor change was even made).

However, the one small bit of justification which Rubio and the GOP could try to make for all of this is that they did all of the above to "save taxpayer money". Of course, Medicare Part D (which was, after all, passed by Republicans without any fuss) includes it's own version of the Risk Corridor program; while it's different in some ways, it's still similar enough that U of M Law Professor Nicholas Bagley states that "one can’t attack the ACA program as a “bailout” without saying the same of the early Part D program."

Hypocrisy aside, however, "no government bailouts!" is supposed to mean that the taxpayers won't be on the hook for the program, right?

Well, Prof. Bagley has a new post today which suggests that Rubio and the GOP might have gone through all of their Risk Corridor Kabuki for absolutely no substantive reason whatsoever (beyond political posturing, of course):

The administration has vaguely said that it will “use other sources of funding for the risk corridors payments, subject to the availability of appropriations.” But the budget bill limits the administration’s power to dip into other funds, and a Republican-controlled Congress isn’t likely to appropriate money for a program that’s been decried as an insurer bailout.

But there’s another option, one that hasn’t received much attention. When Congress creates an entitlement directly in legislation, the person who’s supposed to get the entitlement can file a lawsuit in the Court of Federal Claims to recover what she’s owed. That’s why plans should still be able to get their cost-sharing reductions, even if the House of Representatives prevails in its case over whether an appropriation exists to cover the cost-sharing reductions.

The same principle holds (1) where Congress vests a federal agency with the power to obligate the United States to make certain payments and (2) the agency welches on those obligations. Here, the ACA instructs HHS to create a risk corridor program requiring the government to pay health plans a given amount of money. If the past is any guide, plans should be able to sue if HHS doesn’t pay them in accordance with the program. That’s so whether or not Congress has appropriated money to fund the program.

You get all that? Bagley is saying that to the best of his knowledge, it appears that the risk corridor payments will end up being paid in full no matter what. It's just a matter of time, paperwork and legal red tape.

Of course, the Co-Ops (and that private Wyoming company) are still going out of business at the end of the year anyway (well, one of them didn't even make it that long). It doesn't do them any good to get reimbursed 2-3 years from now when they're already liquidated. The larger point, as Bagley closes, is this:

That’s small consolation to the co-ops that needed risk corridor payments now to stay afloat. But the question for health plans isn’t whether they’ll get paid. It’s when. Marco Rubio hasn’t killed Obamacare and he hasn’t saved taxpayers any money. All he’s done is throw a wrench in the works.

UPDATE: Good grief. Over at Balloon Juice, Richard Mayhew points out that the domino effect of Rubio's Rubi-Con is even worse:

In the short term, the effect is directly about the benchmark plan. Anywhere where a closed insurer was the issuer of the second least expensive Silver (the benchmark plan) or the cheapest silver, the Federal government will pay more in Advanced Premium Tax Credits. The new benchmark plan is either the former #3 Silver or #4 Silver plan. The gap between the personal contribution and the new benchmark plan is now wider than it would have been. Over the long run, there are fewer competitors and more importantly, fewer competitors who are mainly concerned about the Exchange market and thus can offer low provider reimbursement level products (with attendant skinny networks).

So the Rubio rider causes a lot of chaos, does not actually solve the problem it is superficially intended to solve, costs the government more money in the short term as the benchmarks are recalculated upwards, and costs the government more money in the long term as there are fewer insurers and thus less competition. The big winners are Rubio (as he gets to fundraise and preen off of it) and incumbent insurers that have large cash reserves.

UPDATE x2: Mayhew just unpeeled another layer from the onion of stupidity which is Rubio's scheme:

Here's what he means by this: Anyone for whom the cheapest Bronze plan still costs more than 8% (actually 8.13%, according to Louise Norris) of their household income qualifies for an exemption from the Individual Mandate tax penalty. If you earn, say, $25,000, but the dirt-cheapest plan available on the exchange in your area costs more than $2,032/year even with tax subsidies, then you get off the hook and don't have to pay the $695 tax for not being covered.

What Mayhew is noting here is that the Co-Ops tended to have lower premiums than most of their competitors (which, admittedly, is one of the things which got them into trouble in the first place). With them out of the picture, that means that the cheapest plans available are no longer as cheap. Perhaps their local Co-Op would have had a Bronze plan for under $2K for the individual above, thus meaning that they have to sign up or pay the tax...but with the Co-Op having gone belly-up, the next least-expensive Bronze plan available might be $2,200 or whatever. Result? They no longer have to pay the penalty, which means $695 less being paid to the IRS, which means less tax revenue...and thus, an even higher deficit.

Plus, of course, one more uninsured American.