More recently, I've switched to posting the same data starting on December 15th, which is (roughly) the start of the Omicron variant wave (although this is fuzzier than the start of the Delta wave).

First, the partisan breakout: The case rate ratio is a very different picture under Omicron. For the first two months of Omicron, case rates are 1.13x higher in the BLUEST decile than the reddest: 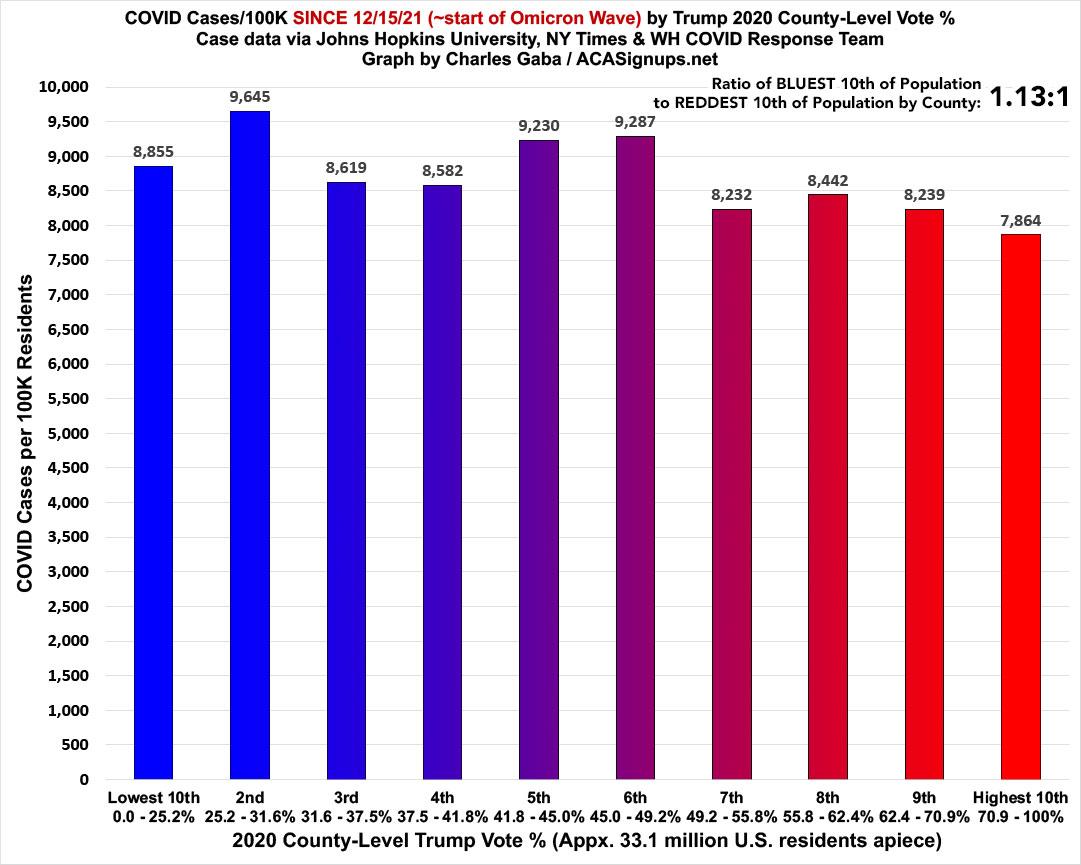 Death rates since Omicron started still swing red, as the death rate in the reddest decile is 2.02x higher than in the bluest. This is down from 2.9x higher a couple of months earlier, however, and down from nearly 5.8x higher during the Delta wave. On the other hand, it's up from 1.96x higher last week, which I'll be talking about more below... 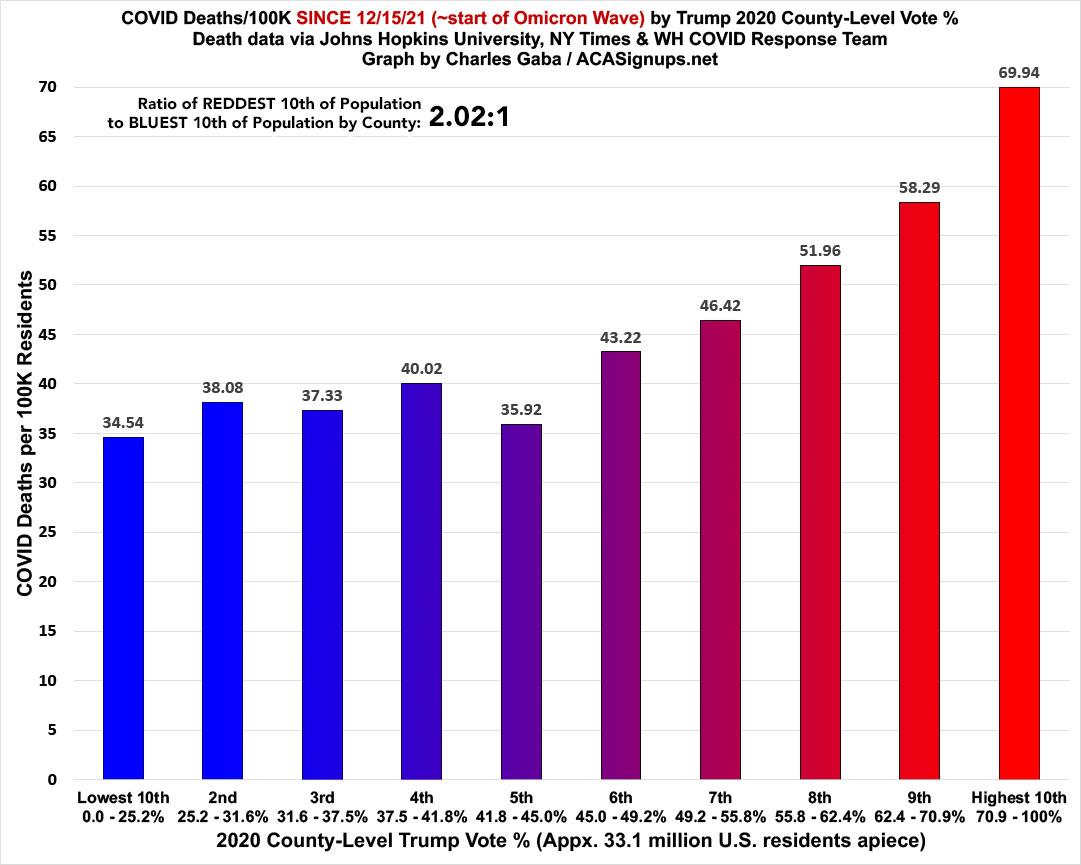 Case rates since mid-December are now 1.3x higher in the most-vaccinated counties...except that this is down from 2.4x higher a couple of months earlier: 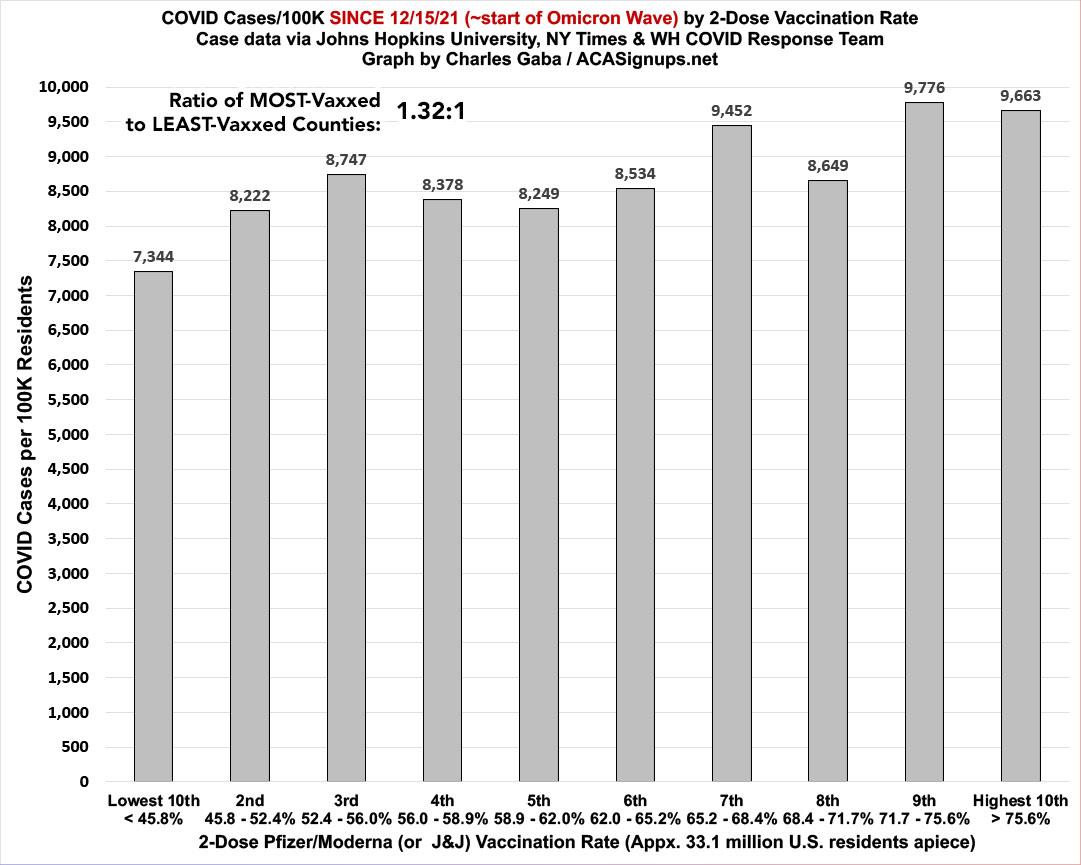 The death rate, however, is still 2.2x higher in the least-vaccinated decile than the most. This is down from 3.3x higher a couple of months ago, and way down from the 4.8x higher ratio during the Delta wave: 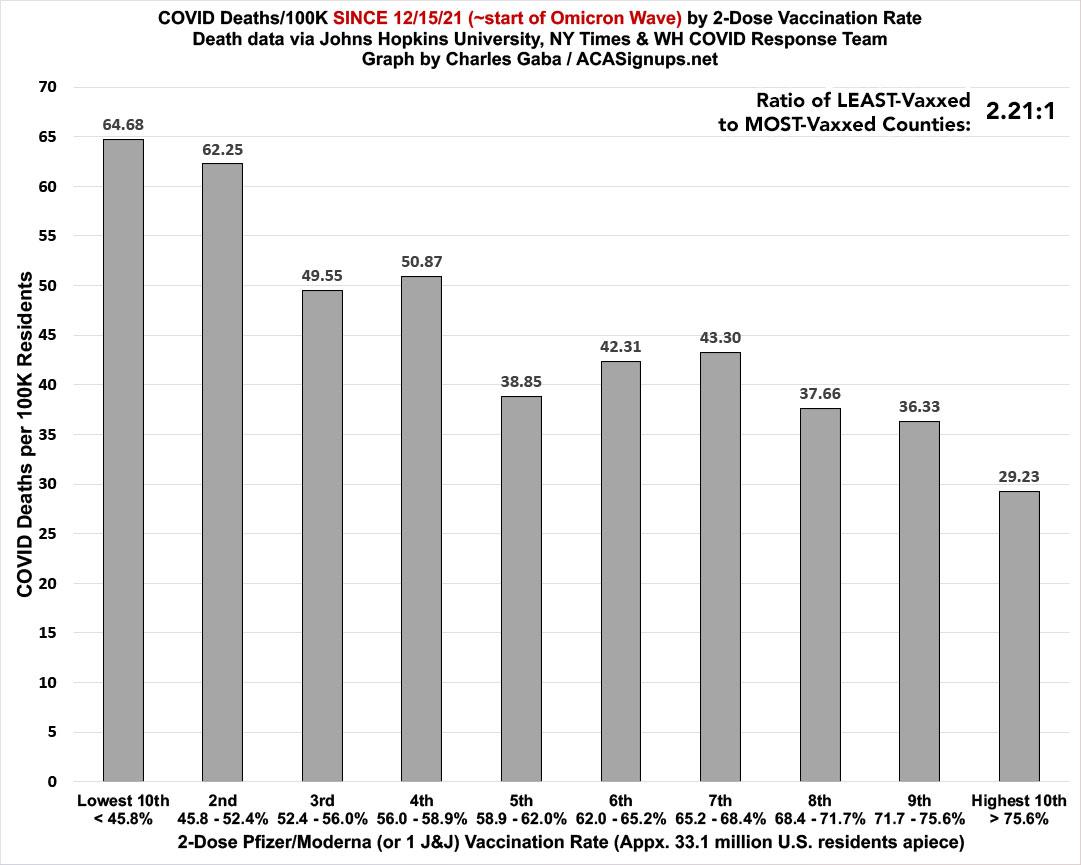 For comparison, here's what the Reddest/Bluest decile ratios look like over time if you start on May 1st, 2021...the point when pretty much all U.S. adults could theoretically have received their second COVID-19 vaccination shot (all adults became eligibie to get vaccinated in every state by early April; the second shot is given 3 weeks after the first): 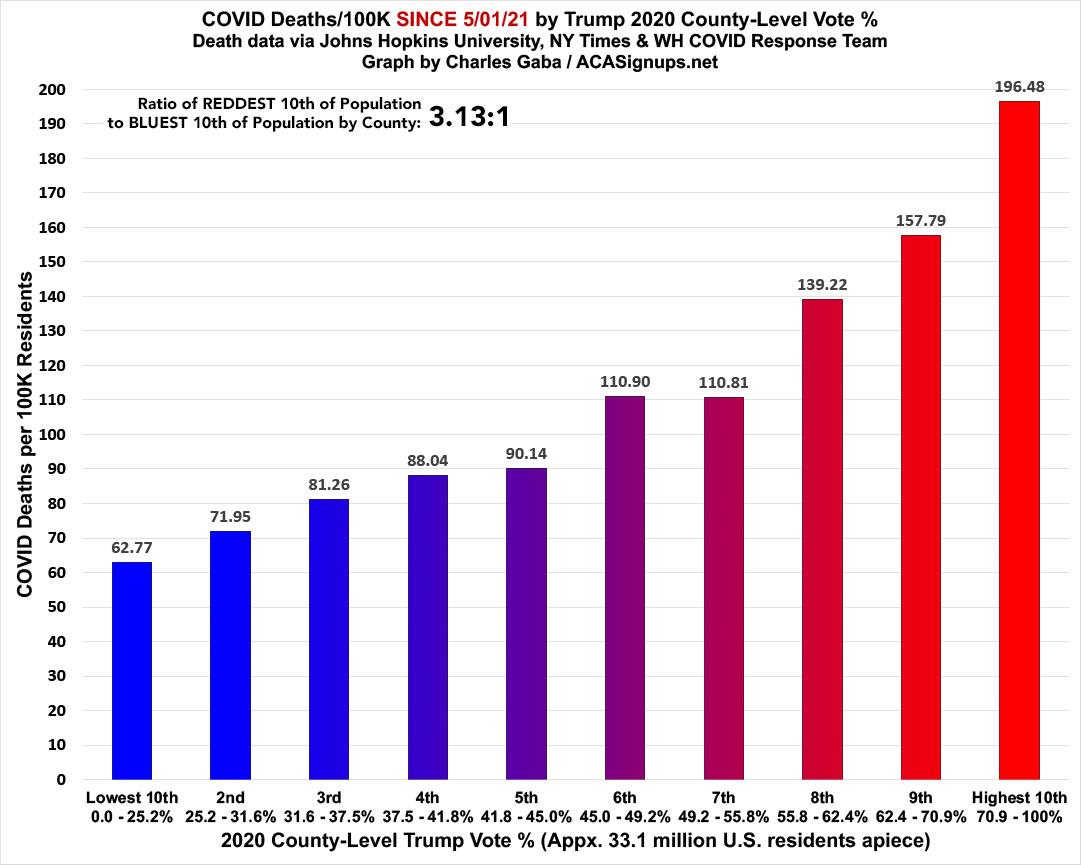 As you can see, the death rate since May 1st, 2021 has been 3.1x higher in the reddest tenth of the country than the bluest.

The graph below shows how both the ratio of both case and death rates have changed over time. Notice how both were slightly higher in the bluest decile up until right around the point that vaccines became widely available...after which they both quickly became higher in the Reddest decile and have stayed that way ever since. 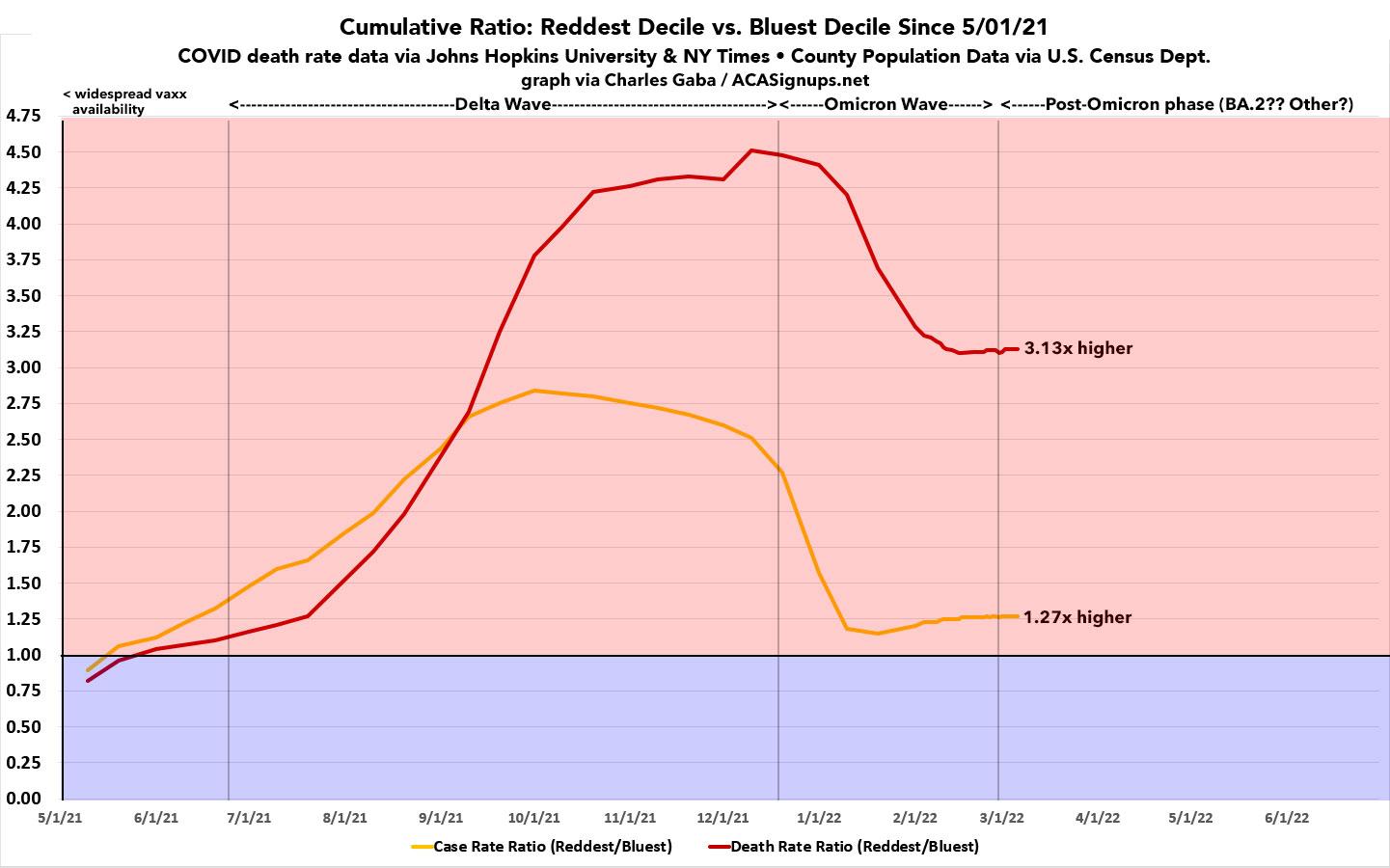 I've also added a new graph. This one shows the 10-day moving average of the ratio between the DAILY death rates in the reddest & bluest deciles, dating all the way back to January 1, 2021.

UPDATE: Some people have also been asking about the actual raw numbers involved here, so here's a table showing the raw COVID-19 deaths reported for each month over the past year (from March 2021 - February 2022), along with the death rate per 100,000 residents, according to the data from Johns Hopkins University. 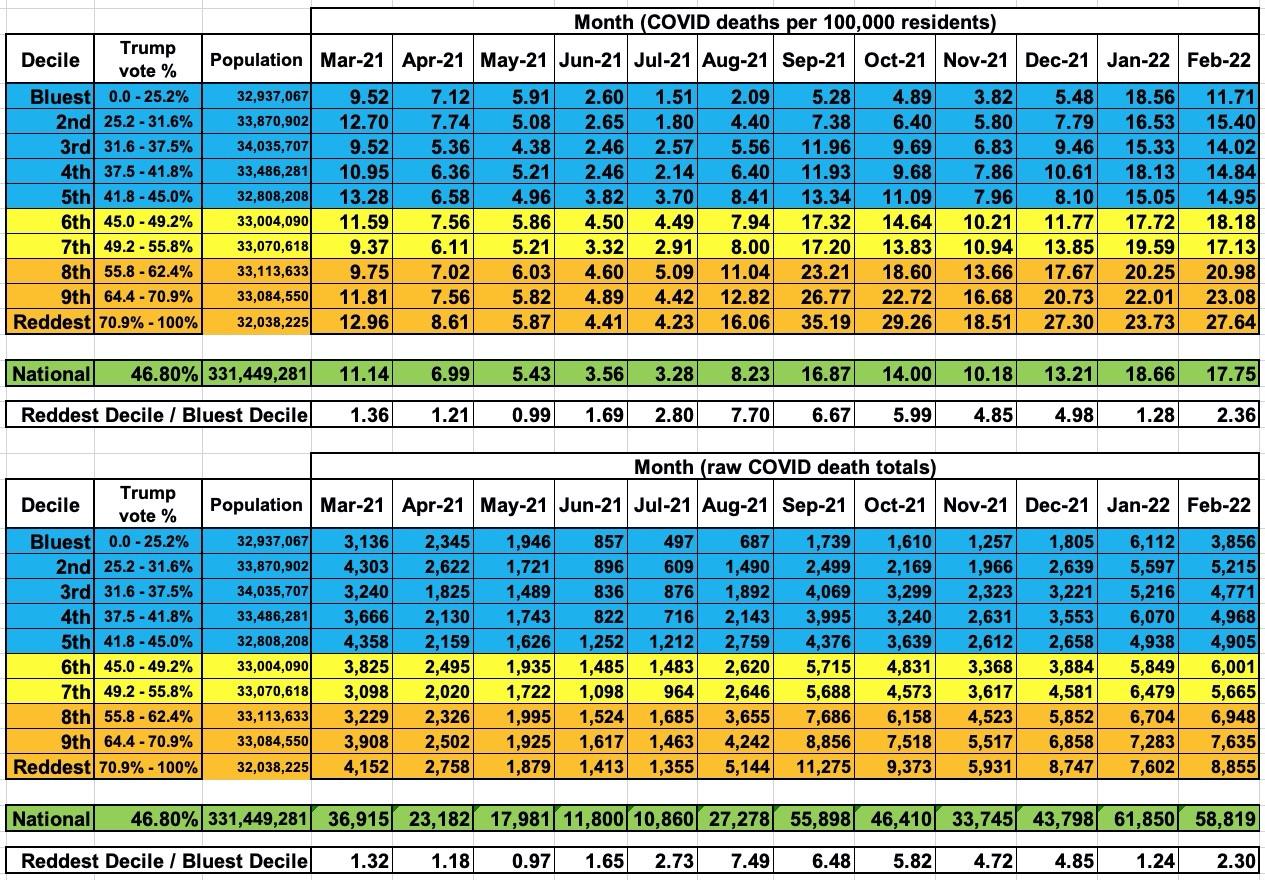 As you can see, the Reddest/Bluest Decile ratios run pretty close to identical whether you go by raw numbers or deaths per 100,000; this is by design, because each decile has roughly the same total number of U.S. residents included (according to the 2020 U.S. Census, anyway).

Here's what the monthly death rate data above looks like visually. As you can see, the Delta wave basically destroyed Red America, whle the Omicron wave narrowed the gap dramatically (not entirely, however).