Way back in October 2013, I launched the ACA Signups project as a light, nerdy hobby thing which was only supposed to last around six months, through the end of the first ACA Open Enrollment Period (March 31, 2014). Instead...well, let's just say that it's more than eight years later and I'm still doing this.

The pattern for both the federal and state-based exchanges typically looks like this:

The federal exchange (HealthCare.Gov): A steady climb the first four weeks; a lull Thanksgiving week; a steady climb the next couple of weeks; and a massive spike the final week (partly due to people jumping in before the deadline, partly due to CMS auto-renewing the several million current enrollees who didn't actively renew immediately after the official December 15th deadline. After that, there's a slight drop-off in HC.gov enrollments as CMS subtracts some enrollees who actively cancel their renewals or who have residency verification issues, but it's basically a straight line from 12/15 - 1/31.

Of course for 2022, the biggest change is that the final Open Enrollment deadline is being extended by another full month, through January 15th (though those who want coverage to start January 1st will still have to sign up by 12/15). This means there will likely be a big drop-off over the last 2 weeks of December (Christmas/New Year's Eve), followed by a mini-surge in the second week of January.

The state-based exchanges (SBMs): The first few years of Open Enrollment, the state exchanges followed the same procedure as HC.gov: They'd wait until the deadline passed, see how many current enrollees were left who hadn't either actively renewed/re-enrolled or cancelled their policies, and would then auto-renew those left. Over the years, however, more and more of the state exchanges have begun front-loading their auto-renewals: Many of them are now entering all current enrollees into the system as renewing for the following year, and then subtracting those who actively switch or cancel their renewals.

The practical upshot of this is exactly the same; the only difference it makes is in how and when the enrollments are reported. As a result, while the HC.gov line below follows a concave curve for the entire enrollment period, the SBM line follows a convex curve the first week before shifting back to a concave curve. Also, unlike HC.gov, which basically flatlines after 12/15 (the official OEP deadline), the SBM line continues to slowly creep upwards since most of the SBMs have later final enrollment deadlines (a few states don't have their final deadlines until January 31st).

Finally, there's the BHP line. Basic Health Plan enrollments are only available in Minnesota and New York, and they're sort of difficult to categorize--like other Qualified Health Plans, they're subsidized ACA-compliant major medical policies...but unlike other QHPs, they aren't counted as part of the same risk pool and are only available to those earning less than 200% FPL. BHP plans can also be enrolled in year-round, similar to Medicaid, although the vast bulk of BHP enrollment still happens during the Open Enrollment Period anyway. 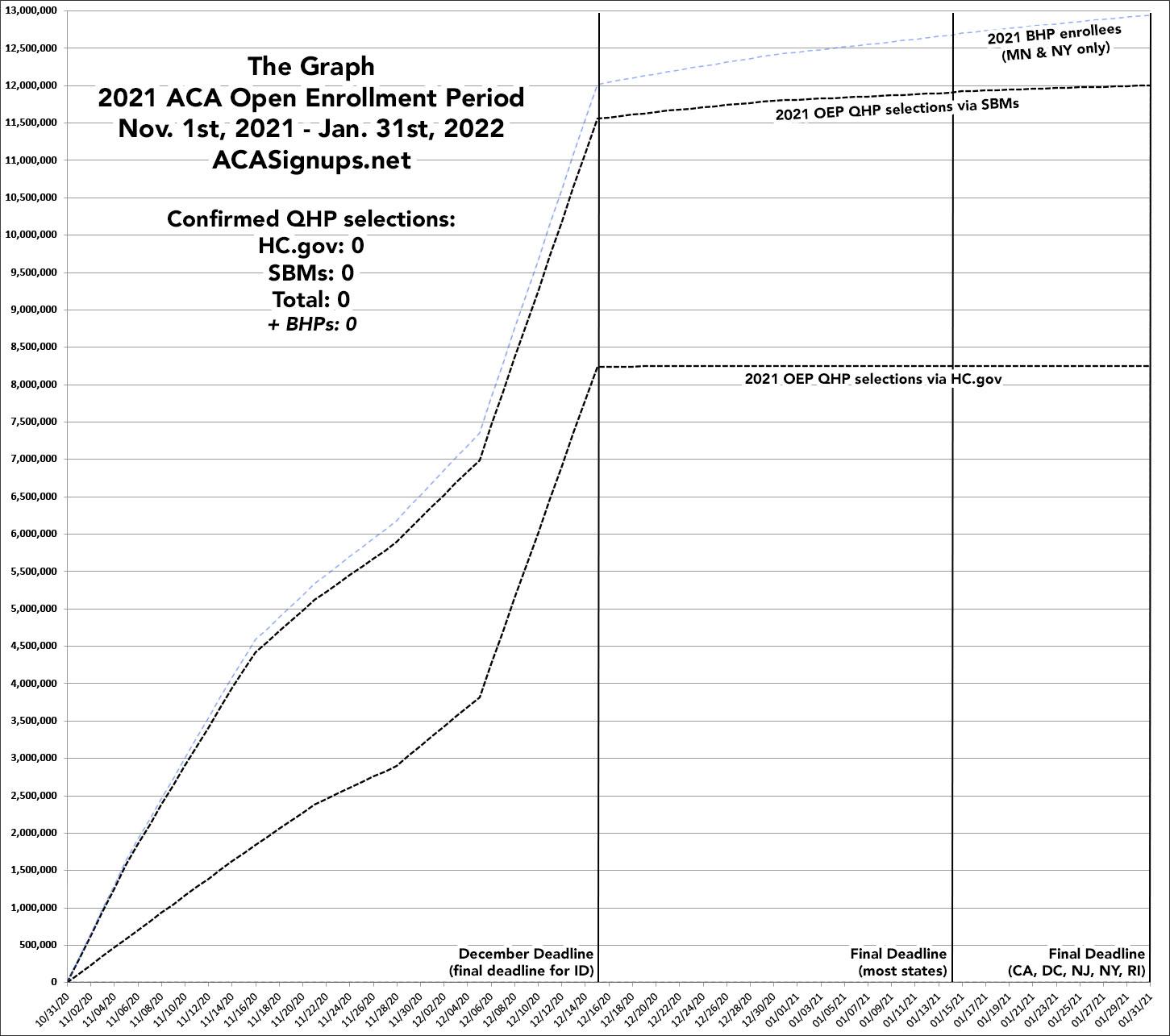