FLASHBACK: Here's how "simple" it was to expand Medicare in 1988 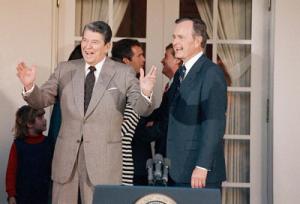 Whenever the discussion of what the next Big Move for healthcare policy should be comes up in Democratic/progressive circles, the incredibly difficult path which had to be paved to get the Affordable Care Act passed in 2009-2010 is often brought up as an example of how difficult it is to make even minor changes, much less major ones.

That gets a bit repetitive after awhile, however, so here's another excellent case study from 20 years earlier: The Medicare Catastrophic Coverage Act of 1988.

Thanks to Amy Lotven for this trip down memory lane via the New York Times:

Retreat in Congress; The Catastrophic-Care Debacle - A special report.; How the New Medicare Law Fell on Hard Times in a Hurry

With the benefit of hindsight, legislators and policy makers in both parties now agree that the seeds of disaster for the Medicare Catastrophic Coverage Act were sown well before it became law barely a year ago.

Rarely has a Government program that promised so much to so many fallen apart so fast. The passage of the bill, in June 1988, was celebrated on both sides as a bipartisan success story in which the White House and the Congress teamed up to provide new medical benefits for the elderly: a ceiling on hospital and doctor bills, expanded payments for nursing home care and prescription drugs, and much more.

But it is now clear that the Reagan White House and the Democrats on Capitol Hill, acting on a set of flawed political calculations, combined to give the elderly ''too much, all at once, and we decided we were going to charge them for it,'' in the words of Senator Dave Durenberger, Republican of Minnesota.

...Once the program arrived on Capitol Hill, the Democrats seized on it as the vehicle for sweeping health benefits for the elderly and for some disabled and needy people. And at Mr. Reagan's insistence, the entire bill was sent to the elderly, in the form of an extra monthly Medicare premium and a surtax for people over 65 with incomes above $35,000.

That tax, little noticed at the time, led to a well-organized protest campaign that ultimately buried members of Congress under an avalanche of angry mail. The revolt culminated last week in a House vote to repeal the measure and a Senate vote to slash the benefits and eliminate the surtax. The two houses will iron out their differences in a conference committee.

The comfortable retirement communities of the West and South were the first to campaign against the surtax. Not only did they resent the extra tax; many were already receiving the benefits the program offered, either as part of their retirement benefits or on the private insurance market.

...The revolt was fueled by the National Committee to Preserve Social Security and Medicare, a mail lobbying and advocacy group whose chairman is James Roosevelt, a son of Franklin D. Roosevelt. The group has been assailed by the program's supporters for publishing misinformation that frightened the elderly, and it acknowledged that its shorthand broadsides sometimes did violence to the facts.

...On Wednesday, the House voted 360 to 66 to repeal the program it had approved just 16 months ago by a vote of 328 to 72. The Senate did not go that far; on Friday it voted 99 to 0 to repeal the surtax and retain only the long-term hospital benefits, eliminating the ceiling on doctor bills, expanded nursing home benefits and drug benefits. The Senate had approved the bill in 1988 by a vote of 86 to 11.

... Joshua M. Wiener, a health care specialist at the Brookings Institution, has noted that the program was seen as a conservative alternative to national health insurance, and one that would help the middle class.

Except that even a bill like this would be attacked as "socialized medicine" by the GOP these days.

...The Bowen proposal was a basic version of the bill that finally became law. It placed a $2,000 ceiling on out-of-pocket payments by Medicare beneficiaries for hospitals and doctors. The program would pay for two hospitalizations, requiring the beneficiary to pay $500 each time, and for 20 percent of approved doctor bills until the $2,000 was used up. Thereafter all hospital and doctor costs would be covered.

...Mr. Reagan stipulated that the program would be financed entirely by the elderly, who would pay a flat fee of $4.92 a month.

Long-term nursing care was what the elderly wanted. But that was financially out of reach; the annual cost was estimated at $20 billion or more, doubling within a few years. The cost of the expanded hospital and doctor coverage proposed by Secretary Bowen was much more modest.

Indeed, the proposal was too modest for many. It was the first major health care bill to come before Congress in years, and advocates of health programs seized on it. ''The bill became the vehicle for the deferred agenda in health care,'' said John Rother, legislative director of the American Association of Retired Persons, the major lobbyist for the bill. ''It was the health policy community seeing this as a way to fix all their problems.'' Mr. Burke, now a health policy consultant, added, ''Congress went on a feeding frenzy.''

The late Representative Claude Pepper, the Florida Democrat who was chairman of the Committee on Aging, and Mr. Waxman were demanding protection for the cost of long-term care. To induce them to drop that demand, the House leadership agreed to support an expensive prescription drug benefit. Other additions followed. The Senate voted coverage for mammography screening and proctoscopic examinations for the elderly and disabled, as well as for certain drugs at home, hospice care and a program to provide help for those who cared for sick relatives at home. The House voted to extend nursing home benefits from 100 days to 150 days and eliminated the requirement that patients spend at least three days in a hospital before becoming entitled to the benefit. It added a program to protect a spouse from becoming bankrupt from the costs of a husband or wife in a nursing home, and a provision having nothing to do with the elderly: a requirement that states provide Medicaid benefits for poor pregnant women and infants under the age of 1.

...The total cost from 1989 through 1993 was initially estimated at $31 billion. The flat premium of $4.92 proposed by President Reagan became a fee that increased from $4 in the 1988 fiscal year to $10.20 in 1993. And Congressional leaders realized that the flat fee could not raise enough money to finance the program, so Congress enacted a surtax, to be added to the income tax bills of the wealthiest Americans aged 65 and older.

''We found that despite all the discussion and all the media attention, many people were not aware of the legislation until it was enacted,'' said Mr. Rother of the American Association of Retired Persons. ''Then they became aware of the price tag, without being aware of the benefits.''

...The group sent fliers to the elderly, urging them to enlist in the campaign to ''Repeal the Seniors-Only Income Tax Increase - costing millions up to $1,600.'' In fact, fewer than two million beneficiaries pay the maximum of $800 an individual and $1,600 a couple.

...The Roosevelt group generated petitions, letter-writing campaigns and telephone calls that flooded Congressional offices. It organized demonstrations in members' home districts. ''We built on the resentment of the seniors,'' Mrs. McSteen said. Many of the program's supporters in Congress feel that the Roosevelt group incited the elderly, especially by implying that all older Americans would pay the maximum $800 surtax.

But the supporters acknowledge that they too had a role in the program's downfall. ''We failed to explain the bill well, and we needlessly complicated the financing by getting it involved in the tax code,'' said Representative Fortney H. (Pete) Stark, the California Democrat who is chairman of the health subcommittee of the Ways and Means Committee.

...Members of Congress were shellshocked.

''Every member of Congress has been accosted at town meetings,'' said Senator John McCain, an Arizona Republican who was one of the 11 Senators who voted against the program last year.

At first, the Senate and House leaders minimized the protests and said they would not revise the program at all. But by spring, the flood of mail and phone calls became too much to ignore. Critics called the leadership arrogant and out of touch with their consituents.

To ease the protests of the elderly, Senator Lloyd Bentsen, the Texas Democrat who is chairman of the Finance Committee, said the surtax could be cut because revenue was going to be greater than needed to finance the program. But he quickly ate his words when the Congressional Budget Office increased the 1989-93 estimate from $31 billion to $48 billion.

BONUS: After the angry mobs Democrats faced in 2009-2010 when the ACA was originally passed and the similarly angry mobs Republicans faced last year when they attempted to ;repeal the ACA, this scene should look quite familiar to members of both parties now: