I stopped tracking cumulative case and death rates in this manner in early June. Here's what the last chart looked like: 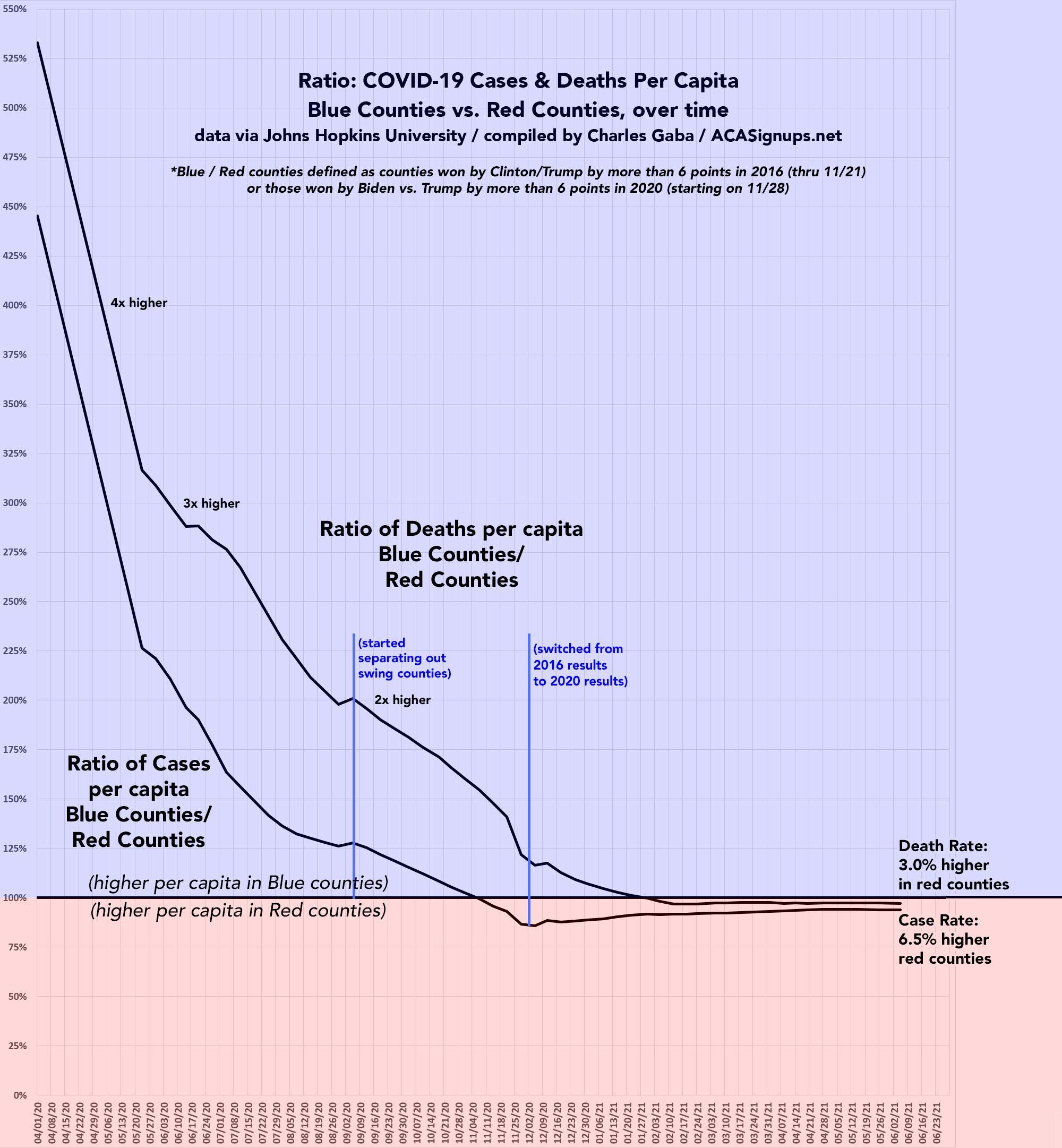 The COVID pandemic situation is an entirely different animal today, so it didn't make much sense to just pick up where I left off. Instead, the graphs below display new case and death rates since July 1st, 2021. I've also decided to switch from a line graph to a scatter plot layout in order to match my county/state-level vaccination rate graphs. I've also changed the scale from cases per 1,000 residents to cases per 100K since that seems to be what most media outlets are going with. Finally, I've slightly tweaked my definition of "swing county" to any county where Trump received between 45 - 55% of the vote. 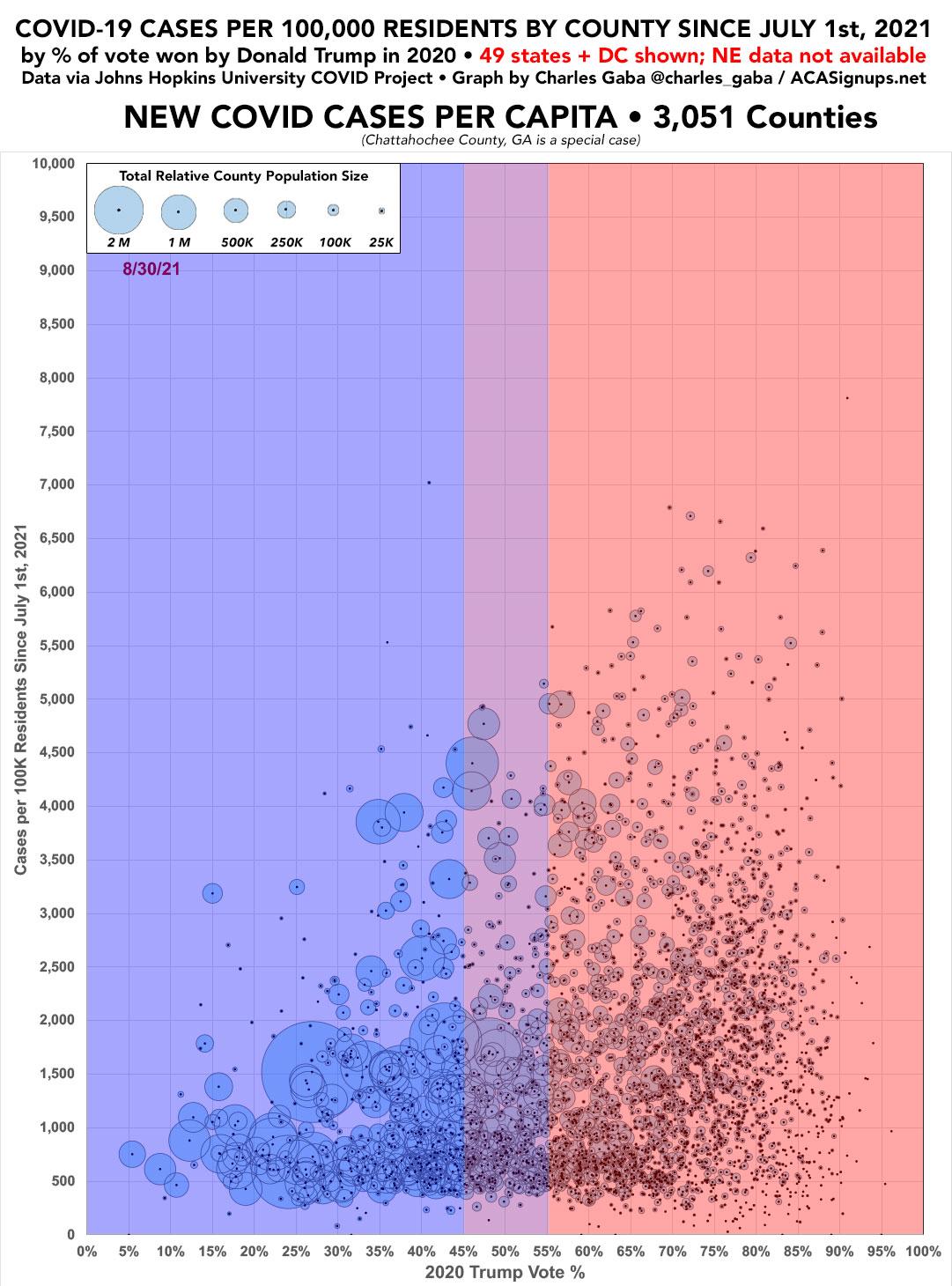 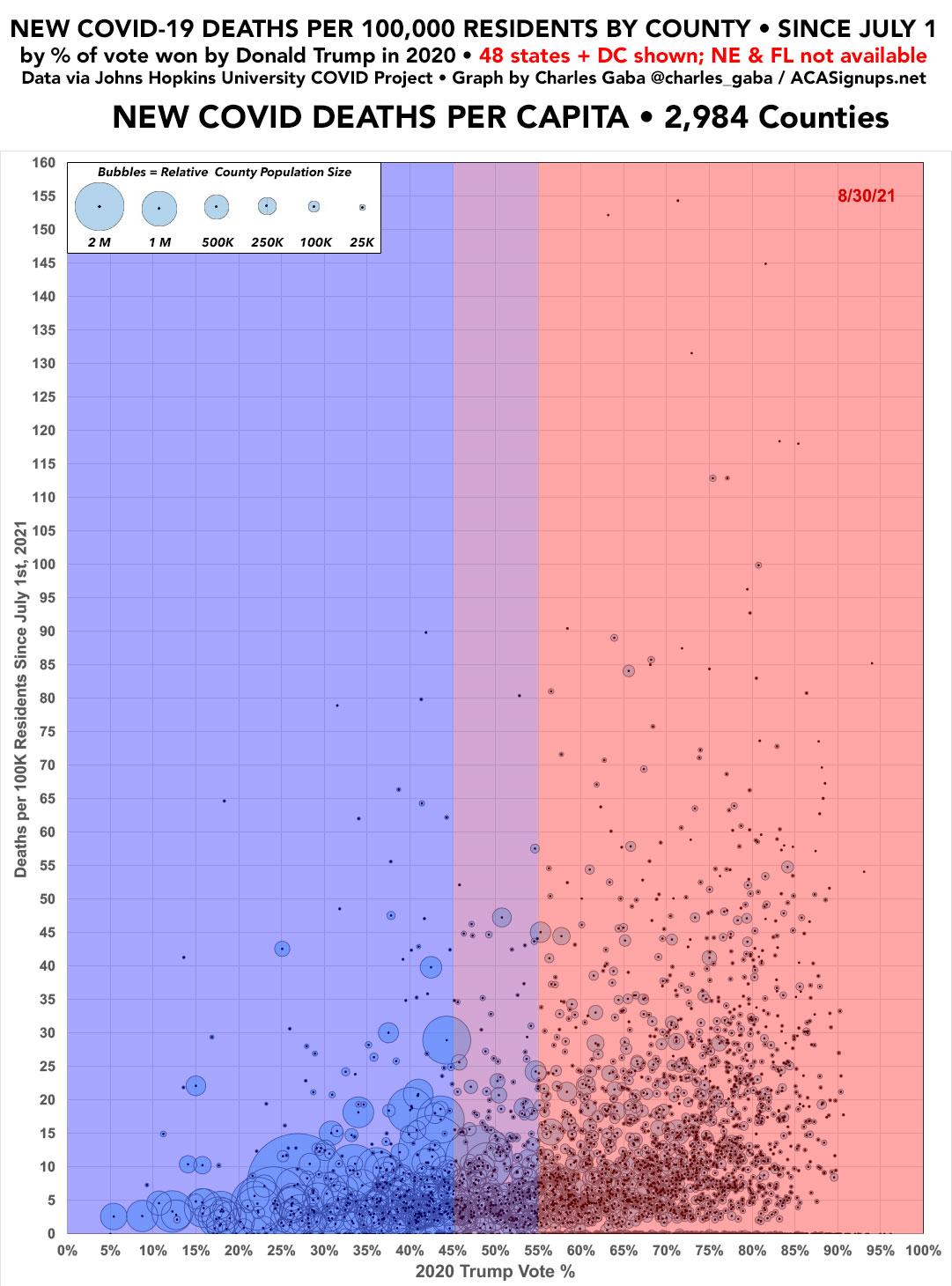 Here's a summary of where things stand on both the case and death rate front as of 8/29/21. The denominator (population size) has been adjusted to remove Nebraska for both cases & deaths and Florida for deaths only:

Oh, as for the cumulative rates (that is, total cases/deaths since the pandemic started 18 months ago), both the case and death rates in the Red counties now stands at roughly 16 - 17% higher than in the Blue counties:

Meanwhile, here's nonpartisan graphs showing the new case and death rates compared to the vaccination rates of every U.S. county. Again, Nebraska isn't included in either one, and Florida is missing from the second graph.

There's a clear pattern developing, although Miami-Dade county is one hell of an outlier in the first graph: 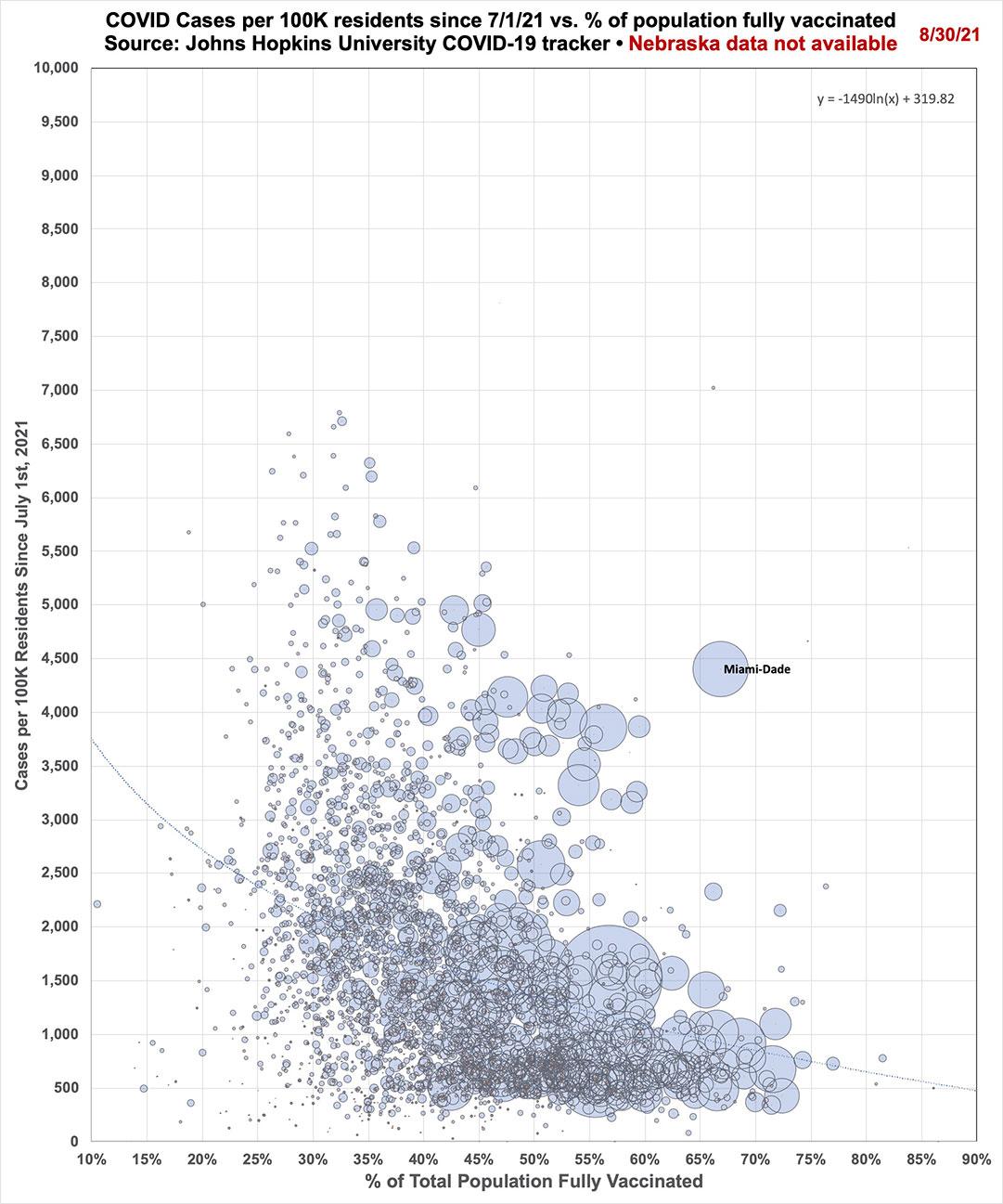 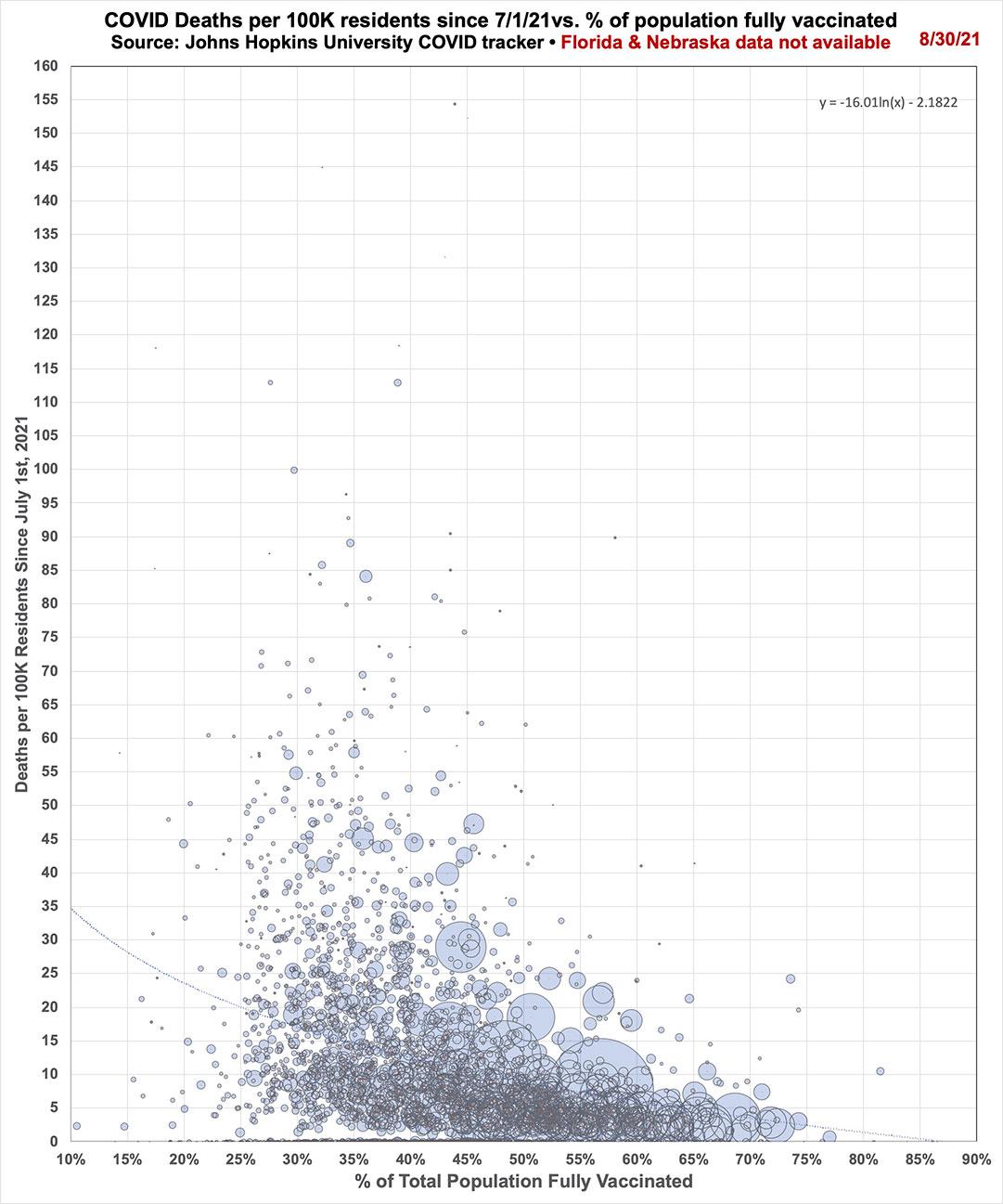 Regardless of where you live, #GetVaxxedNOW, dammit.

UPDATE: Earlier today, Christopher Ingraham of The Why Axis posted a piece about this very topic called, quite simply, "GOP Covid Policy is killing GOP voters." It mostly covers the same ground I have in this and prior pieces, but it also includes another graph which illustrates the point even better than my bubble graphs do. He groups most of the U.S. population into 5 brackets based on how much of the vote Trump got last year (0 - 20%, 20 - 40%, etc), with vertical bars showing the COVID death rate since July 31st in each group.

First, his graph doesn't include Nebraska, Florida or Alaska--the first two because they stopped releasing county-level death data earlier this summer; the third because Alaska publishes their voter data based on legislative districts, not boroughs or census areas.

Second, he limits his graph to counties which have more than 10,000 residents since tiny counties have a high noise ratio, which is reasonable.

I decided to take Ingraham's work to the next level:

Sure enough...well, take a look: 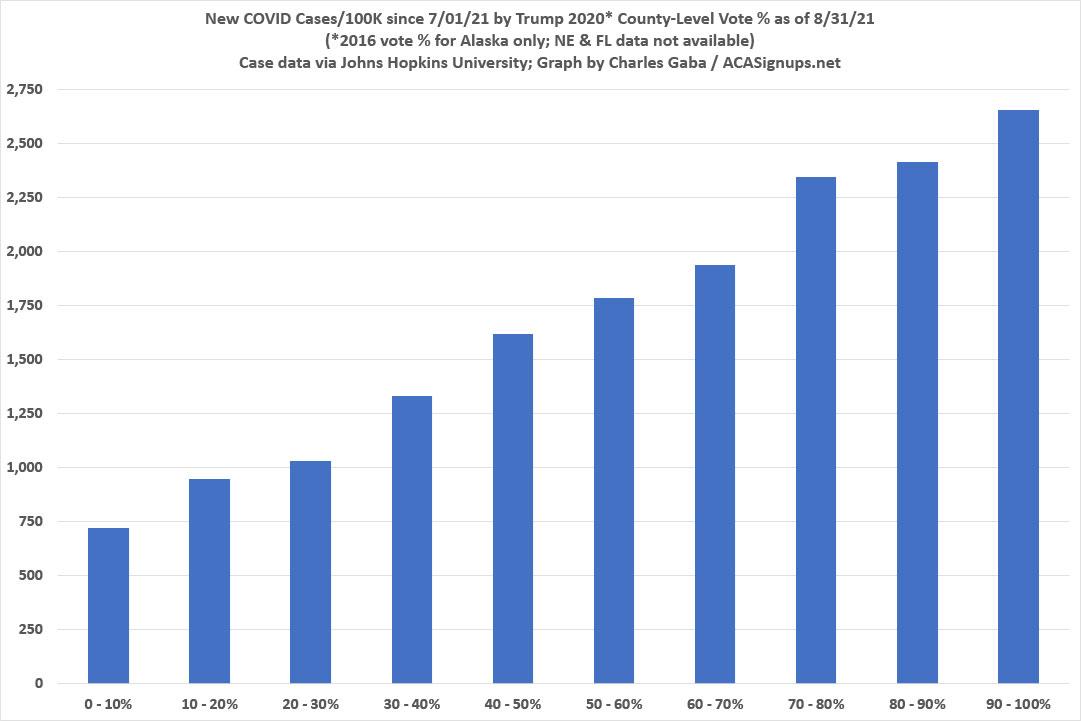 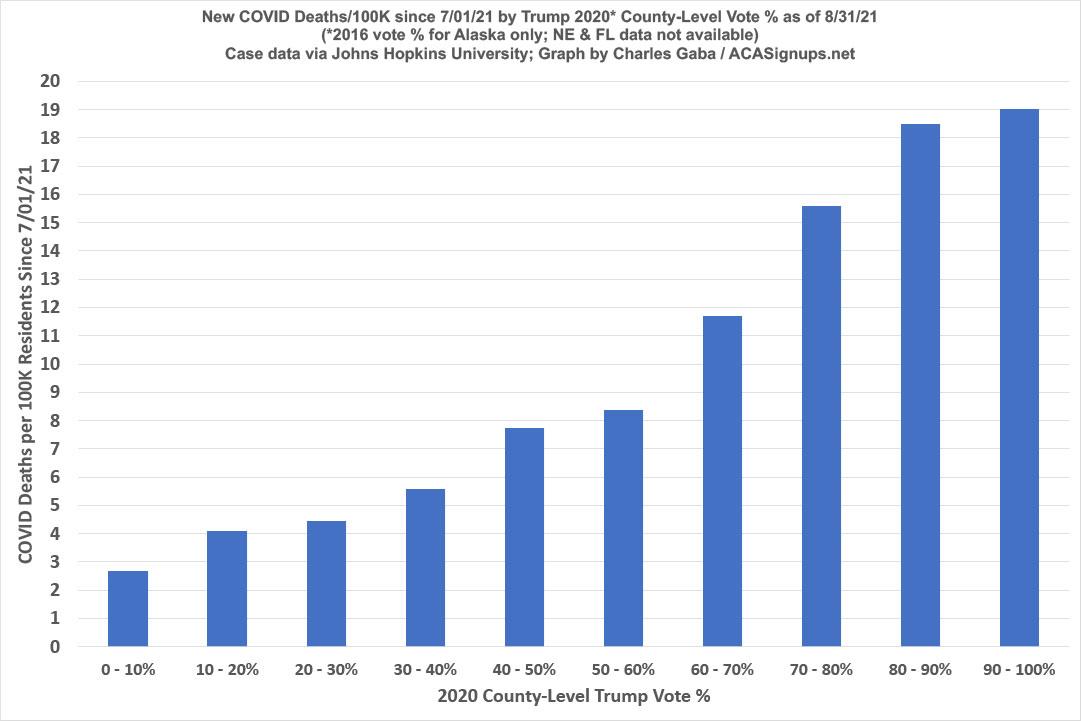