Have Dems finally cracked the Medicaid Gap code with a two-phase process? 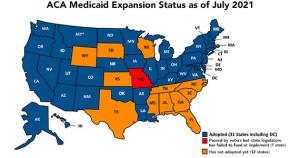 From about six weeks ago:

KFF estimate that as of today, nearly 2.2 million Americans currently fall into the "Medicaid Gap" in the 12 states which haven't expanded Medicaid under the Affordable Care Act yet...

They also estimate that another 1.8 million uninsured Americans who are eligible for subsidized ACA exchange plans who would be eligible for Medicaid instead if those state actually did expand Medicaid (and perhaps another 100K in Missouri). That's nearly 4.0 million total...

So, how to crack this nut in these holdout states, all of which are either completely or partially controlled by Republicans who have adamantly refused to expand the program no matter what all these years?

The remaining options mostly involve giving up on convincing the states to do the right thing (either ethically, morally or even fiscally), shifting the solution over to the federal government. Again, there are several routes they could take:

...However, there are some downsides to this as well:

First, Medicaid is far more comprehensive than nearly all ACA plans, and usually costs the enrollees nearly nothing, so it would be an inferior form of coverage for most of the Medicaid Gap population.

Secondly, if the lower-end subsidy cut-off were removed, it's almost certain that quite a few states which have already expanded the program would reverse themselves and allow Medicaid expansion to expire, in order to save the 10% portion of the cost that they have to pay.

...All of this leaves one more possible option...which seems to be what Senators Warnock & Ossoff of Georgia (one of the holdout states) along with Senator Baldwin of Wisconsin (another holdout state) to be trying next:

The bill as described would also include at least some incentives for currently-expanded states NOT to drop their Medicaid expansion programs...or at the very least it includes disincentives for them to do so.

The biggest logistical problem is that setting up a whole new federal program would take some time & effort to put together (and no, simply "expanding Medicare" to this population is not a viable option...Medicare and Medicaid work quite differently).

Fortunately, it looks like Congressional Democrats have come up with a simple hybrid solution to this issue, via Peter Sullivan of The Hill:

Congressional Democrats are likely to create a new federal program in their coming package to provide health insurance coverage in states that have declined to expand Medicaid, following a transition period to set up the new program, aides and advocates say.

The move, coming as part of the $3.5 trillion package Democrats are now crafting, would provide coverage to the over 2 million people who are currently ineligible because they live in the 12 Republican-led states that have declined to accept the expansion of Medicaid under the Affordable Care Act.

This population currently falls through the cracks in what is known as the "coverage gap."

Democrats had previously said they planned to provide coverage to this population in the new package, but the details of how to do that, which have been subject to some debate, are now coming into focus.

The likely plan is to first subsidize the coverage gap population to get private insurance on the ACA's marketplaces, until sometime around 2025 or 2026, which would give time to set up the new system, aides and advocates say.

Then, a new federal coverage program would kick in to provide health insurance to the coverage gap population in the 12 states who have not expanded Medicaid already.

In other words, the current lower-tier 100% Federal Poverty Line (FPL) income cut-off for ACA subsidies would be removed...but only temporarily until the new federal program can be ramped up.

Combined with the American Rescue Plan's ACA subsidy expansion, this would mean that all 2.2 million in the Medicaid Gap population would immediately (well...as of January 2022) become eligible for fully-subsidized private exchange coverage with nominal deductibles/co-pays, just as those who earn 100 - 150% FPL are today (or 138 - 150% in Medicaid expansion states).

This would be the case from 2022 - perhaps 2025, after which the federal program would kick in.

In theory, this would cause ACA exchange enrollment to spike by up to ~2 million more people...and then to drop by up to 4 million or so starting in 2026, since the federal program would presumably cover all the way up to 138% FPL, so the 100 - 138% overlap population would also be shifted off the ACA exchanges to the new program.