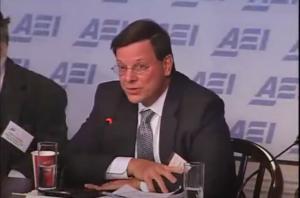 A rational person might be wondering why the Trump Administration and 20-odd Republican Attorneys General are still dead set on tearing down the entire Affordable Care Act over ten years after it was signed into law, even in the middle of a global pandemic which has already killed more than 130,000 Americans and infected nearly 3 million more.

To give you an idea of just how obsessed certain right-wingers are with killing the ACA, even after all these years, I'd strongly advise listening to this clip of George Mason University Law Professor Michael Greve speaking very candidly on a panel at the 2010 American Enterprise Institute conference. This was just 9 months after the ACA was signed into law by President Obama and a full 3 years before the major provisions of the ACA (including Medicaid expansion, the ACA exchanges, full ACA policy compliance requirements, subsidies and so forth) went into effect.

I've cued it up to when Greve starts speaking (the relevant clip is around 45 seconds long), but just in case the link above doesn't cue up properly, you'll need to scroll to just past 90 minutes in.

For those who can't hear him or who just prefer to read his words instead of hearing them, here's the relevant passage (thanks to Linda Greenhouse and Dylan Scott, who both wrote articles about Greve's back in 2014 in the midst of the then-brewing "King vs. Burwell" lawsuit. Also, thanks to Jonathan Adler, who was himself one of the architects of the King v. Burwell case, for pointing me towards the actual clip which I've been searching for for years):

“This bastard has to be killed as a matter of political hygiene. I do not care how this is done, whether it’s dismembered, whether we drive a stake through its heart, whether we tar and feather it and drive it out of town, whether we strangle it. I don’t care who does it, whether it’s some court some place, or the United States Congress. Any which way, any dollar spent on that goal is worth spending, any brief filed toward that end is worth filing, any speech or panel contribution toward that end is of service to the United States.”

Keep this quote in mind when you ponder the sheer insanity and absurdity of trying to tear away healthcare coverage from 23 million Americans in the middle of a deadly pandemic.

Scott closed his 2014 article by noting something else which Greve says a minute or so after his initial tirade:

One other comment from Greve during that 2010 panel seems particularly prescient. Back then, the individual mandate was the top legal target for those seeking to stop Obamacare. But Greve encouraged opponents, even before the Supreme Court upheld the mandate in 2012, to focus on “bits and pieces” of the law to stop it. And now, what many regard as a typo or poor drafting threatens to undo Obamacare.

“I think this is the right way to go,” Greve said, “to concentrate on bits and pieces of this law beyond the mandate.”

At the time, Greve (and Scott) were referring to the King v. Burwell case, which zeroed in on exactly four words in the law ("established by the State"). The current lawsuit to take down the ACA actually has nothing to do with the ACA itself; it has to do with an entirely different law, passed exclusively by Republicans, which modifies the ACA in such a way as to change the mandate penalty from $695 (or 2.5% of income) to $0 (or 0.0% of income).

Again, the entire GOP case boils down to:

It's an absolutely absurd argument which, like the King case, never should've made it this far...and yet here we are.

A rational person might say that even if zeroing out the penalty made the mandate unconstitutional (it doesn't), shouldn't the obvious solution be to either a) strike down the underlying mandate language itself or b) strike down the portion of the 2017 GOP tax bill which made the mandate unconstitutional instead (thus restoring the penalty to $695/2.5%)?

(There's also two other options at Congress's disposal: Pass a new law either changing the penalty to some amount greater than $0...even $1/person would suffice...or one which strikes out the underlying mandate language of their own volition.)

Yes, that's what a rational person would say. You know, like none other than U.S. Supreme Court Justice (and Trump appointee) Brett Kavanaugh, who said just today:

This line from Kavanaugh in the robocall case -- arguing that the entire law need not be invalidated -- feels like something that will show up in the Obamacare case. Roberts, Alito aboard for this part of opinion.